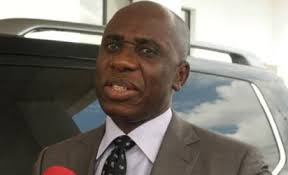 Since President Muhammadu Buhari declared his stand on the subsidy removal issue indicating that he was still pondering over the matter as, according to him, removal of subsidy will hurt the poor thereby by extension announcing his pro poor stance, I had thought of joining issues to explain that even if removal of subsidy could be inflationary it might not harm the poor as feared as studies had established the fact that only a negligible proportion of the poor enjoy the benefit of subsidy and therefore what really needed to be done is to build in some palliatives to cushion this probable effect before effecting the removal.

But I was reluctant and was not convinced that it was worth my while until I stumbled on and watched a programme on Sunday night after the popular Channels Television News at Ten which was on the 16 years of public service of Rotimi Amaechi, the immediate past governor of Rivers State, who most marvelled at his courage at taking on a sitting president particularly the way and manner he did so and thought that it was a must watch and I was glad I did. After Amaechi declared during the programme speaking on the subsidy regime that the cost of subsidy was N300 billion under both Obasanjo and Yar’Adua’s governments but suddenly increased to N1.9 trillion ( I heard N1.4 trillion earlier) under President Goodluck Jonathan and how he was invited to a meeting at which it was announced that the amount of the subsidy was going to be jerked up which he balked at in conscience as he was supposed to get a share as the chairman of the Governor’s Forum and how he was upbraided and called all manner of names by President Jonathan, I thought that I needed no further motivation to join issues regarding the subsidy removal debate.

What, therefore, I intend to do in this article is to dispassionately look at the subsidy environment as it is presently, highlight some of the murky issues relating to it, avert our mind regarding a preferred strategy for the removal of subsidy in the country mindful of our recent experience and  recommend the way forward. But it will be most unfair if I do not in the first place say one or two things about the entire programme during which Amaechi was celebrated which was transmitted by Channels Television. As the vice president who was the chairman of the occasion observed when it was his turn to make some remarks at the event, Rotimi Amaechi had certainly been the toast of the moment as he had one event or the other celebrating him recently. I recall particularly a book launch here in Lagos which was held at the Institute of International Affairs for which Bishop Kukah was the reviewer which was supposed to be on Amaechi’s time as the governor of Rivers State and particularly the observation made by Bishop Kukah to the effect that there was a misalignment between the title and the content of the book as it was really a collection of testimonials by some notable stakeholders on his tenure rather than an account of his stewardship.

I was particularly fascinated that I shared a lot in common with Amaechi. We both share the Catholic faith. In fact, I am a knight of the Church (Knight of Saint Mulumba) since the year 2000 and both of us share the culture of attendance at daily morning Mass which I agree with Amaechi is quite efficacious as it tantamounts in faith to literally handing the day over to the Lord and asking Him to take preeminent control which will probably account for the boldness and courage which Amaechi is reputed to have exhibited; a child of God has really no fear. What was not probably added is the fact that to enjoy the full benefit of the protection of the Lord that you must strive to avoid sin particularly the sin of the flesh which is a sin against the Holy Spirit as our bodies are temples of the Holy Spirit. Once one commits sin he loses sanctifying grace and God literally turns away from the sinner.

The other talking point was the declaration by Amaechi that he does not like money, alluding to the fact that everyone knows so in the state and yet they will not rise to his defence. Well I do not know if he is privy to what is currently trending in the social media announcing key compatriots and the amount of money reported to have been found in his account overseas even if one must quickly added that it is advisable to take such information with a pinch of salt. My position on the issue of money is that money is a good servant but a bad master. You need money to sustain a reasonable quality of life. What is bad is excessive love of money which is simply ‘Greed’; a Capital sin in the same class as Envy, Slothfulness, Pride, Gluttony, Lust, Anger and Covetousness. On the whole it was a well packaged programme during which the first lady and her friends showed their dance steps and El Rufai and companion not to be out done also let their heads down but I am still wondering regarding the proprietary of some of the observations made by Amaechi when it was his time to respond particularly as it were; this was to a large extent a public announcement. But in my opinion the entire programme was professionally packaged including the choice of entertainers that performed live during the event including the joke regarding short, average or diminutive height and who the leader should be amongst those in government!

The subsidy environment in the country today is characterized by the payment of unearned subsidy which had placed an unsustainable toll on the treasury; the amount of subsidy is variously estimated at about 30 percent of government expenditure, 4 percent of Gross Domestic Product and 118 percent of capital expenditure. The level of subsidy as has been severally demonstrated breeds the worst type of corruption, encourages the smuggling of imported refined products across the borders to take advantage of the subsidized price, creates occasional scarcity, productivity sapping long queues, cost of product in many parts of the country outside the main urban centers of Lagos and Abuja at prices higher than the regulated price, potential damage to car engines as citizens purchase adulterated products owing to the activities of greedy hawkers and the growth of the sector is undermined as even associated gas is not optimized and as private capital remains shy of going into a regulated environment and generally a poor advertisement for a country which is the sixth largest producer of crude petroleum but which is woefully dependent on importation to meet its needs for refined products.

Obviously it goes without saying that this level of subsidy payment is injurious to the development of the national economy and cannot therefore be sustained. And therefore there is the urgent need for some initiative in this connection. As a quick win it will be necessary to activate the refineries in the country to begin to operate optimally to reduce the burden of importation which also contributes in no small measure to the pressure which the country presently confronts in managing the exchange rate. It is welcome development as it has been recently announced that all the refineries in the country are roaring back into operation: the fear of President Buhari! And my considered view is the fear that the poor will be impacted is to a large extent exaggerated.

One is of course mindful of the experience during the most recent attempt to remove the subsidy in January 2011 which resulted in total gridlock as the country ground to a halt over the whole of one week and there was palpable fear that an environment was being inadvertently created for the return of the military and therefore we recommend consultation with organized labour to convince them of the unassailable need for the subsidy to be removed. And we would wish to caution that what we recommend is once and for all removal of subsidy by total deregulation of the downstream petroleum sector.