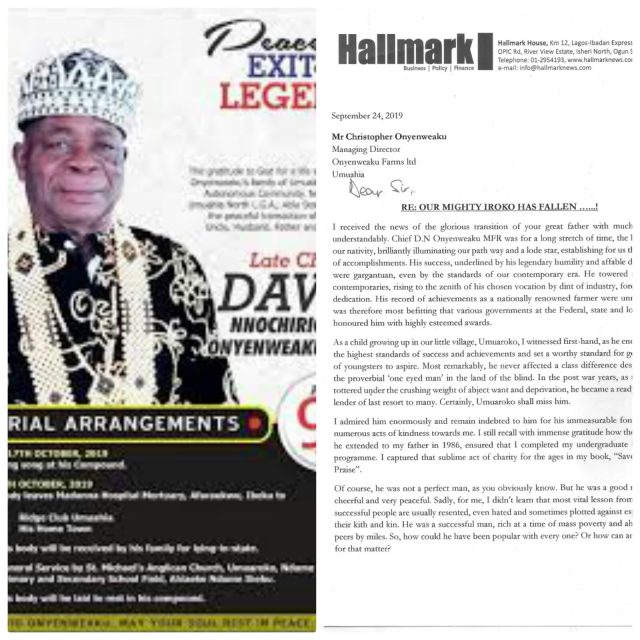 I received the news of the glorious transition of your great father with much sadness, understandably. Chief D.N Onyenweaku MFR was for a long stretch of time, the beacon of our nativity, brilliantly illuminating our path way and a lodestar, establishing for us the metrics of accomplishments. His success, underlined by his legendary humility and affable disposition, were gargantuan, even by the standards of our contemporary era. He towered above his contemporaries, rising to the zenith of his chosen vocation, by dint of industry, foresight and dedication. His record of achievements as a nationally renowned farmer were unrivalled. It was therefore most befitting that various governments at the Federal, state and local levels, honoured him with highly esteemed awards.

As a child growing up in our little village, Umuaroko, he encapsulated the highest standards of success and achievements and set a worthy standard for generations of youngsters to aspire. Most remarkably, he never affected a class difference despite being the proverbial ‘one eyed man’ in the land of the blind. In the post war years, as the village tottered under the crushing weight of abject want and deprivation, he became a ready help and lender of last resort, to many. Certainly, Umuaroko shall miss him.

I admired him enormously and remain indebted to him for his immeasurable fondness and numerous acts of kindness towards me. I still recall with immense gratitude how the soft loan he extended to my father in 1986, ensured that I completed my undergraduate University programme. I captured that sublime act of charity for the ages, in my book, “Saved for His Praise”.

Of course, he was not a perfect man, as you obviously know. But he was a good man; kind, cheerful and very peaceful. Sadly, for me, I didn’t learn that most vital lesson from him; that successful people are usually resented, even hated and sometimes plotted against especially by their kith and kin. He was a successful man, rich at a time of mass poverty and ahead of his peers by miles. So, how could he have been popular with every one? Or how can anyone else, for that matter?

His demise draws the curtain on the last generation of titans who made Umuaroko the “small but mighty”, village it is. I recall with poignant nostalgia, such people like his own father, Jumbo and his sons: Pa Marcus, Sir P.C and De Josiah.

There were also the great Tom Abalogu and his Kinsman, De Johnson, the unforgettable John Agwoaka and his sons, the immaculate M.M Ariwodo, the debonair D.N Okoroafor the riveting Mark Ibeleme etc. Indeed, this transition marks the end of an eventful era. It was a process which began for me at a personal level, that memorable day when my iconic grandmother-Elendife – passed. The glorious exit of my parents subsequently, especially my beautiful mother, Onyenganga, brought the message home very clearly – that there has ineed been a passing of guards and a new era was imminent.

Your father was the last of the Mohicans. His tenacity and longevity stood in the breach, and like a guardian angel, shepherded us through the dark, fretful path of putative adulthood.

As he goes the way of his fore bearers, we the inheritors of his legacy must step up to the sublime calling of manhood in order for Umuaroko to continue its eternal march of greatness. That is our historic duty.

So let me rejoice with you and your siblings this day; that you were blessed with such an amazing father. I exalt the name of the Lord for His grace upon his life and especially for blessing him with such a long life. Do not mourn, rather celebrate and thank God for the privilege of his life. He deserves no less.

You can count on the support and prayers of my dear wife, Dr Betty Emeka Obasi and children, at this challenging period. As for me, ah, but of course!

Obviously, I am with you all the way…. Chief would have expected no less!!! 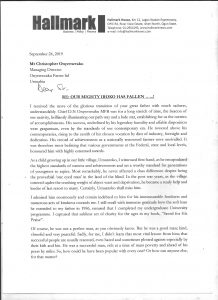