Prince Emeka Obasi, an award-winning journalist and publisher of Business Hallmark Newspaper, who passed away on Tuesday March 15, will be buried on Thursday, April 14 at his country home in Umuaroko, Ndume Ibeku, Umuahia North Local Government of Abia State.

According to a programme of event announced by Prince Emeka Obasi Jnr, on behalf of his family, the funeral rites will commence on Friday, April 8. 2022 with service of songs at the Trinity House, Trinity Avenue by Water Corporation Drive, off Ligali Ayorinde Street, Victoria Island, Lagos.

This will be followed by another service of songs on Wednesday April 13, 2022 at his home in Umuaroko, Ndume Ibeku, Abia State.

Until his death, Prince Obasi who passed away at 58 after an illness, was the pounder, Public Policy Research and Analysis Centre, organizers of the Zik Prize in Leadership Awards.

The programme which will be conducted in Lagos and his home town Umuahia, is detailed below: 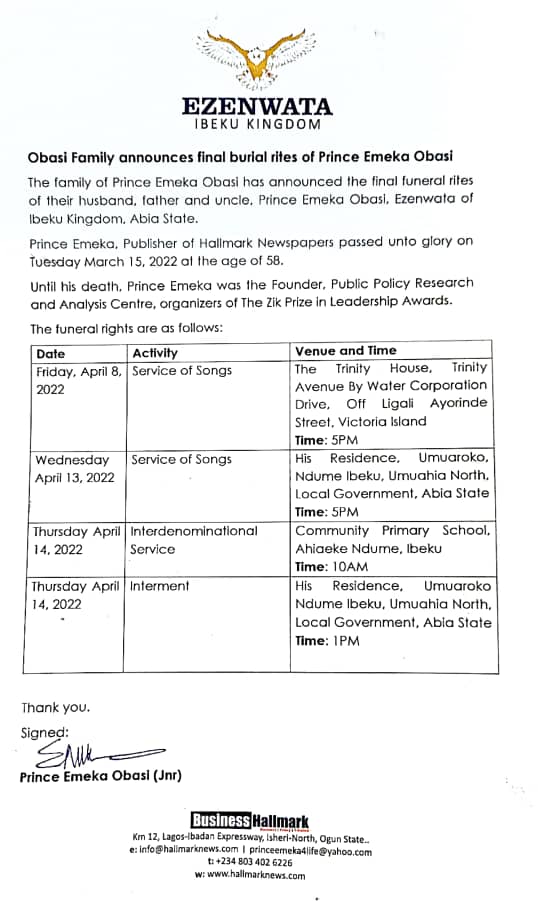