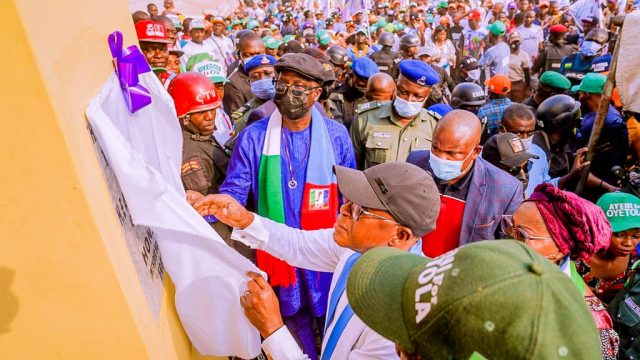 Oyetola commissioned the town hall during his Strategic Engagement Tour to the Ijesa South Federal Constituency.

During the commissioning, the governor eulogized the lawmaker for the edifice, calling on other stakeholders to emulate his humanitarian gesture.

He lauded Hon. Ayeni for his unwavering love for his constituents, which, according him, is evident in his various people’s oriented constituency projects.

While expressing gratitude for the support and patriotic nature of Hon. Ayeni, Oyetola noted that concerted efforts of the citizenry, political office holders and career officers is required to fast track development in any society.

He saluted the people of Ijesaland for their support which, according to him, made his administration to record successes in all strata of the economy.

The state helmsman, encouraged Hon.vAyeni to leverage on the reciprocated love of his people to do more for them.

Speaking on what inspired him to embark on the empowerment programmes, which according to him had got more than ten thousand youths off the streets, Hon. Ayeni , said he would continue to put smiles on the faces of his people as long as God gives him the grace to do so.