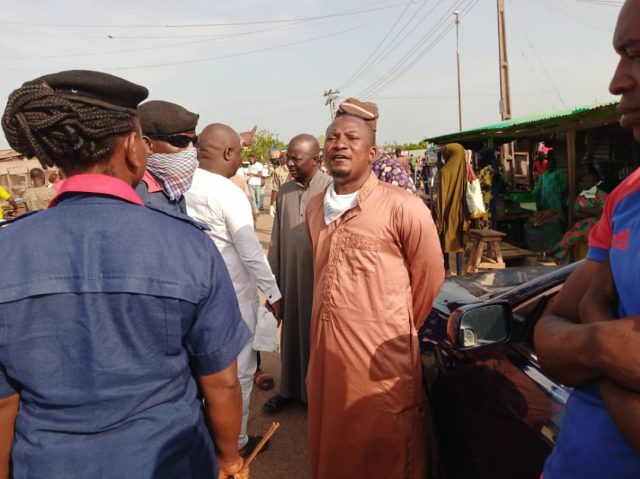 As part of efforts to curb the spread of Coronavirus (COVID-19) in Osun state, Traders at the popular Owode market, Ede North Local Council Development Area, in the state were on Thursday dispersed by security operatives.

This is coming after the state government had directed that all markets on weekly basis across the State be suspended indefinitely.

But, this morning traders in the markets were seen flaunting the government’s order as they gathered for business transaction as usual.

The Council Chairman, Hon Mukaila Uthman, who had arrived the market as early as 6:00 am in the morning to monitor level of compliance and educate them on the need to adhere strictly to the state government directive, persuaded them but they refused to comply .

It took the Intervention of the men of the Nigerian Police and Nigeria Security and Civil Defence Corps led by DPO, Ede Division, CSP Akanni to dispersed the traders who refused to comply with the government’s detective.

The Council Chairman while speaking to newmen said the government’s decision to shut down the weekly markets was part of the precautionary measures to curtail the spread of the deadly Coronavirus pandemic.

He said since there are confirmed cases of COVID-19 diseases in the neigboring states and that the with the recent confirmed case of the novel Coronavirus in the state, all hands must be on deck to ensure that the disease is contained from spreading across the state.

According to Chairman, the lock down of the market is necessary due to the fact that Osun has boundaries with some States that have cases of the COVID-19, adding that people from neighboring states patronise the weekly markets, which he said, makes Osun open to disease.

Commending Governor Gboyega Oyetola for putting precautionary measure in place , Uthman enjoined the market women to support government’s effort in containing the spread of the disease by ensuring regular hand washing just as he urged them to set up hand-washing points and provide sanitiziers for everyone who patronise them.

He also warned people against loitering at markets, urging them them to leave immediately after performing their transactions.

“I want to thank the governor for the proactive measure put in place for all the state to follow. This is not business as usual before we have any case in Osun the governor has put necessary arrangements in place.

“Here in Owode market. We held a meeting with Baba Loja and Iyaloja based on the instruction given out by the governor last week that the only proactive measure we can use is for us not to allow people to gather at anywhere in the state but our people don’t want to listen despite the explanation.

“Government have tried their best and we are still on it. Our people are still not getting it right. We disperse them with the help of our security personnels. The lives of our people is our priority and we have to continue until they obey us.

“When we met with them and some said they will not be able to survive and we explain to them that is not that we are closing the market outrightly but we are suspending any gathering of people for now.

“We have being sensitising them times without number on coronavirus and how deadly it is. what we are doing now is enforcement we have been here since 6am but they are not listening. We have been pleading with them.

Sent from Yahoo Mail on Android