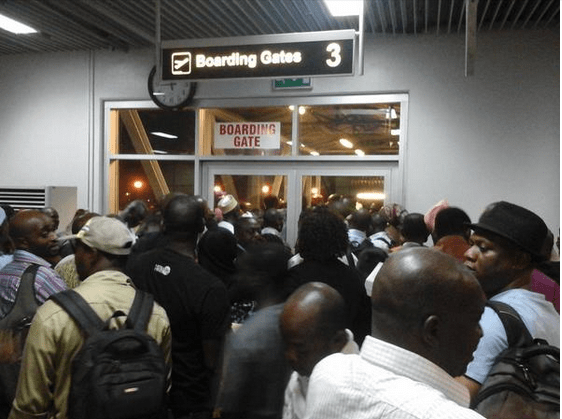 Aggrieved air passengers have berated two of the major domestic airlines in Nigeria for constant flight delays and cancellation. These airlines are Arik Airline and Aero Airline.

Some of the passengers who expressed their grievances said it was becoming a norm for these two airlines to frustrate travelling passengers with their poor flight schedule.

Nwajei Temi, a passenger who had an unpleasant experience with Arik airline spoke to Hallmark business.

She said, “I have promised never to fly with them again. Two weeks ago, when I flew with them, my flight was for 11pm, I checked in around 9pm and we started boarding by 10pm.

You won’t believe that we didn’t leave the airport till 10pm the next day. I slept in the airport and when we finally took off; we then heard that there was shortage of fuel in the plane.

So they flew us to Port Harcourt and we were there for about three hours.”

Another passenger, Mr. Tony Emmanuel who is an IT consultant disclosed that Aero was worse than Arik airlines in terms of flight delays and cancellation.

“For Aero it has become a habit and a norm in their operations to delay or cancel flights. Compared to Aero, Arik is still far better.

Imagine your flight is scheduled to take off 9am and you end up leaving by 9.30pm in the night. I would never advice any serious business man to fly Aero,” Tony said.

When Hallmark business asked Mr. Tam Tamunokonbia, Head of Consumers Protection Council (CPC), Lagos what the body was doing to protect air passengers rights, he stated that CPC has been doing a lot to sensitize air passengers on their rights by distributing leaflets in airports across the country.

According to him, many passengers do not know their rights and there is need to inform them.

“Some of the things passengers don’t know are that; after one hour of your flight being delayed, you are entitled to snacks and drinks plus two free telephone calls. After two hours and beyond, a meal, two free phone calls, SMS or E-mail, plus a right to re-imbursement or re-routing of flight.

Then between 10pm to 4pm or after the airports are closed, free hotel accommodation, free transportation to and from accommodation venue, plus two free telephone calls, SMS or e-mail,” Mr. Tamunokonbia revealed.

On cancellation of flight Mr. Tamunokonbi said according to the passengers’ bill of rights, 24 hours notice of cancellation must be given or an immediate compensation of 25% ticket price if no notice is given.

He further stated that they have tried to prosecute some airline operators who were violating these laws but their effort had been thwarted with constant interference by the Nigeria Civil Aviation Authority (NCAA) who would rather have airline operators pay fine to the body than compensate aggrieved passengers.

When contacted to react on the issue, both airlines officials declined to comment.