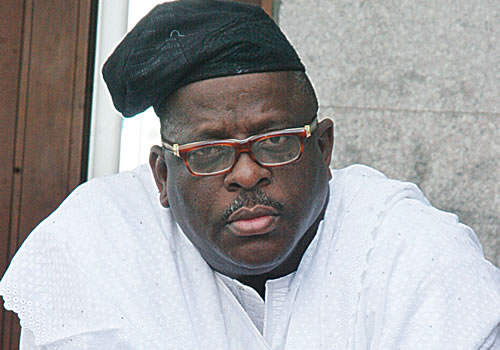 A High Court sitting in Ijebu-Ode, Ogun State on Thursday, dismissed two suits filed by the former Chairman of the state chapter of the People’s Democratic Party (PDP), Engr. Adebayo Dayo and his son, Bola.
The two had filed two separate suits against Police and Senator Buruji Kashamu alleging that their Fundamental rights of freedom of movement, association and property ownership in any part of the country were about to be breached.

In the suits number HCJ/64/2020 and HCJ/65/2020, Dayo and his son, Bola, had asked the court to restrain the Assistant Inspector-General of Police (AIG Zone 2), the Commissioner of Police, Ogun State and the Divisional Police Officer (DPO), Ijebu-Igbo, Ogun State, from arresting and detaining them over the complaints made against them by Senator Kashamu.

Recall that Dayo was the first to write petitions to the Police and State Security Service (SSS) alleging threats to his life and his household.

Upon being invited by the Police and SSS to substantiate his allegations, Dayo and his son, Bola, refused to honour Police invitation but chose to go from one court to the other seeking orders to bar the security agencies from doing their job.

Delivering judgment in the two cases today, the Honourable Justice O.S Olusanya found that both suits were an abuse of court processes and dismissed them.

Reacting to the court judgments,the Chairman of the Labour Party (LP) in Ogun State and immediate past Chairman of the Inter-Party Advisory Council IPAC in Ogun State, Comrade Gentleman Abayomi Arabambi said, “With today’s court pronouncements, the Police and other security agencies can now do their job of investigating all the allegations and counter-allegations against the parties in dispute with a view to establishing the veracity or otherwise of their claims and counter-claims.”

It would be recalled that the Federal High Court sitting in Abeokuta, the Ogun State capital, had on the 10th of June, 2020, dismissed a similar suit filed by Bola and awarded a cost of N100,000 against him.