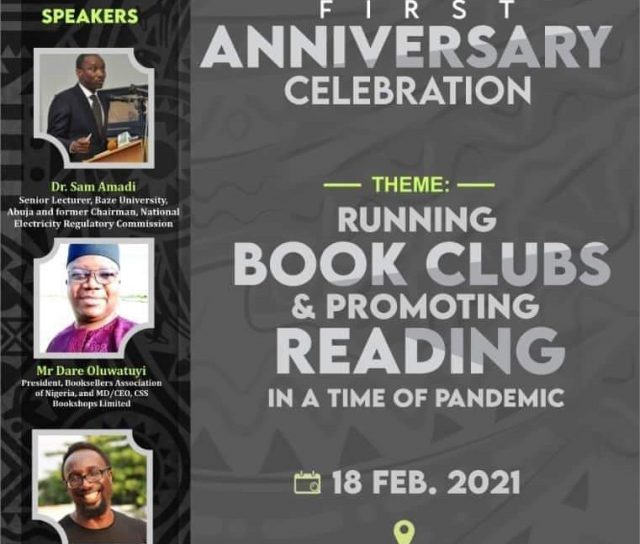 The stakeholders who spoke on the occasion of the first anniversary of the Network of Book Clubs and Reading Promoters in Nigeria (NBRPN) on Thursday, asked for more initiatives in harmonising reading power in Nigeria as a veritable way of helping the country better realise its potential.

In his opening remarks at the session, the Convener and President of the Network, Mr. Richard Mammah said the organisation was open to anyone running a book club or reading promotions project in the country, noting that there were very high chances that if “we have a better reading culture we will invariably come to have a better country.”

He asked for more initiatives in harmonising reading power in Nigeria as a veritable way of helping Nigeria better realise its potential. He challenged participants with a poser: ‘how do we build our reading space in such a way and across the next 20 to 30 years so we can be known and addressed as ‘the nation that reads?’

Addressing the gathering, President of the Booksellers Association of Nigeria, Oluwatuyi called attention to the need to address issues of data and logistics costs to ensure greater affordability of book products, many of which continue to be imported. He also called for specific attention to help authors write as well as support for other stakeholders in the book chain.

He asked stakeholders to also pay special attention to the imperative of cultivating readership, remarking that there is indeed no book sector without readers. Noting that there was already a degree of collaboration between some of the other components in the books chain, including the booksellers and publishers, he agreed that it was quite necessary to also cultivate greater collaboration between booksellers and book clubs.

He solicited the support of members of the Network and indeed all Nigerians for the work of the African Chapter of the UN SDGs Book Club which he remarked would be inaugurated in April.

In his own remarks, President of the Nigerian Publishers Association, Chief Anioke, noted that it was desirable for publishers to partner book clubs as that was one way to get book products to even the most remote parts of the country where ordinarily they may not be able to get books.

He promised that the NPA would give credible support to book clubs and called for even more platforms of this sort for the sharing of ideas and the development of plans for the sector.

In her contribution, veteran bookseller and former President of the Nigerian Booksellers Association and the Pan African Booksellers Association, Mrs. Oluronke Orimalade, equally lauded the initiative saying it was much needed. She however lamented the current state of book sector patronage and reading in the country saying that it was indeed raising grave concerns that if something serious is not done we could be faced with the sceptre of bookshops dying along with a potential impact that the overall education sector could indeed also be endangered.

To redress the situation, Orimalade advocated the establishment of a National Book Commission and greater focus on rural reading promotion.

On his part, Spoken Word Poet and Director of Programmes at the Abuja Literary Society, ALS, Mr. Dike Chukwumerije affirmed that it was refreshing for him always to be in the company of those who value ideas, saying that everything begins with words and that reading was a very effective way of helping people develop their capacity to imagine.

He said that real shared love for books is the fulcrum and forge of a new world where true change is born, recalling that he has spent nine years with ALS where they hold weekly sessions of book club, open mic and related literary and reading interactions.

On the claim that Abuja has no soul and character, he said that it is human beings that give a city its soul and that the pandemic actually was a challenge but that they were able to migrate to virtual readings during the season of lockdown and restrictions but that they also noticed an inevitable drop in drop in numbers given that there is indeed something quite physical in the public reading encounter.

He, however, noted that they were also able to capitalise on the boundary-less possibilities of the digital world, and host a Pan African Literary Festival even at that time. He was to finally close his presentation with a reading of his spoken word composition, ‘This is It.’

Dr Sam Amadi, Associate Professor at Baze University spoke to the issue of policy, remarking that there was a sense in which book literacy has a direct impact on political literacy and that even drawing from the recent American crisis of democracy, it was not impossible that some of the less engaging use of social media and the proliferation of junk books may have indeed contributed to what has been described as the lowering of the overall national intelligence in Uncle Sam’s country.

He noted that the research in the field had revealed that reading provided greater leverage for the development of intelligence as there was a connection between the rigour involved in the knowledge process than that which could be gotten from say, watching visual content on screens.

On the importance of cultivating a broad reading habit that is foundationally hinged on an interest in Literary texts, he underscored that this could not be overemphasized.

‘Literature is the best indicator of insight in a society. It tells stories of our lives. It tells you the multi-dimensions of the lived experience of people – their fears, uncertainties, etc – something that theory does not exactly cover,’ Amadi affirmed.

He therefore, recommended that universities should be sure to incorporate reading sessions in their curriculum and activities.

Amadi equally noted the need for a national book policy to stimulate book production. ‘It is in everyone’s interest to ensure that the book culture grows and that creativity is nurtured for national development,’ he stated.

He also called for a need to also focus on the better and more creative use of digital platforms given that the highly visual mode of the newer social media platforms predisposed users to a possible loss of interrogation.

On the specific effect of the pandemic, he noted that it may have had a paradoxical effect as he remarked that it was not impossible that some people may have read more in this period on account of the sedentary disposition of the times. More fundamentally though, he remarked that the pandemic could also be quietly changing the deeper dialectics of the sector, in terms of the culture and anthropology of book production and reception in several respects.

Contributing, Dr. Okediran, PAWA Secretary-General also introduced the African Chapter of the soon-to-be-inaugurated United Nations SDGs Club to the audience, outlining that the organisation would be selecting books in French, English, Arabic and Swahili that fitted within the frame of the SDGs, and also noting that ‘we cant do this without the support of book clubs.’

He noted that he has only recently resumed at the PAWA secretariat to help coordinate African writers.

Okediran, who is founder of the Ebedi residency and resort in Oyo State, said that he is indeed on loan to Africa in his current assignment.

Adedapo Adegboyega Conde of Pea Foundation, Emmanuel Okoro of the Lekki Book Club, Udeme Nnanna of the Uyo Book Club and Mrs Temitope Oladeji of the Arepo Book Club shared reports on the experiences and activities of their respective groups in the reading promotions circuit.

The group has a stated objective to increase the number of clubs and associations within its loop to 80 at the close of the year.