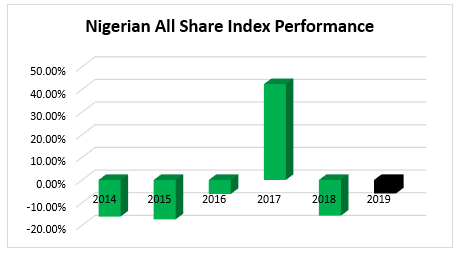 The persistent volatility in the Nigerian equity market has propelled investors to seek haven in the bond market, which has been relatively stable with higher yields. The equity market has shed -5.95 per cent this year, after posting -15.74 per cent return in 2018, underpinned on sell-off by investors who are moving to take advantage of higher interest rates in developed economies.

Investors are also worried by the unimpressive growth in the Nigerian economy since it recovered from recession in June 2017, growing by just 1.9 per cent last year, while the population increased by over 2.6 per cent.

“The outlook of Nigerian economy is not very strong. The upside potential is weak while the upside risk is high. During economic uncertainty, investors shift their portfolios from variable assets to fixed income assets where they are guaranteed of their return on investment. This is what we are seeing in the market currently,” he told BusinessHallmark in a telephone chat.

The government has projected 3 per cent Gross Domestic Product (GDP) growth rate for this year, but global financial consultancy firm, PricewaterhouseCoopers Ltd (PwC), expects the economy to grow slightly by 2.5 per cent on moderate improvements in net exports and domestic demand, while the International Monetary Fund (IMF) forecasts two per cent growth for 2019. 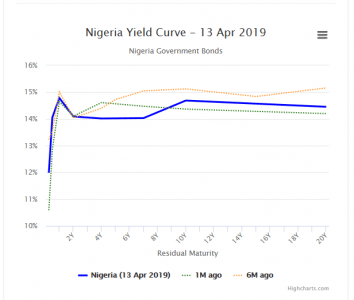 The over 14 per cent yield on Federal Government 10 bonds has been the motivation for investors to migrate to the Nigerian bond market and other financial instruments.

The recent vigour of the secondary fixed income market under the management of FMDQ, which gives investors the leeway to easily enter and exit the market, is also an impetus to the stability this segment of the Nigerian capital market is currently enjoying.

The renewed interest in the Nigerian fixed income market has encouraged many companies to approach the market to raise fresh capitals, the most recent were N20.5 billion Commercial Papers issued by UACN Property Development Company (UPDC) and Flour Mills of Nigeria.

Ecobank recently issued a $540 million Eurobond to refinance existing debt obligations and provide additional fund to grow its continental operations. Access Bank which just concluded its merger with Diamond Bank, recently successfully raised US$300 million through Eurobond with a maturity date of October 2021 and at a coupon of 10.5 per cent.

Meanwhile, the 30 per cent rise in oil price this year to $71.55 and the country external reserves inching up four per cent in 2019, have not been strong enough to reinvigorate investors’ interest in the equity market.

Investors are anxious about inability of banks to grow their gross earnings, taking advantage of the room created by the IFRS 9, (International Financial Reporting Standards) which allows them to write-back the provisions made in 2017 into their profit; this helped improved the lenders’ bottom-lines last year.

Foreign Portfolio investors have also decided to adopt a sit-back position to see when the country’s 2019 budget would be eventually passed into law and the policies the government would roll out to stimulate improved economic growth in the next four years, having expressed concerns of the President Buhari administration’s approach towards economic management.

In its Nigeria Economic Outlook, PwC stated that Foreign Direct Investment (FDI) flows into the country would be dampened by lackluster implementation of policy reforms, declining interest rate differentials as advanced economies continue to tighten policy rates, and political instability following the 2019 elections, as well as broad macroeconomic instability.

“We expect revenues to underperform budget by c.27% as a shortfall in oil supply offsets the impact of oil price growth scenarios,” it said in the report.

The firm noted it expects debt service to revenue to expand higher than the projected 31 per cent in the budget and fiscal deficit to widen by 79 per cent to N4.55 trillion (3% of GDP).

According to PwC, “We expect that the deficit will be funded by an increased issuance in the domestic bond market.”

Abayomi Ajayi, Research Analyst at Investment One Financial Services, told Business Hallmark that after the successful completion of the 2019 elections, there was strong de-risking of Nigerian assets, which encouraged inflows into the country’s fixed income market.

He added that investors are positioning themselves for Federal Government 30 years bond, which would be issued later in the year.

“On the equity market, investors want to see what will happen in the next four years of this present administration,” Ajayi explained.

Investors are already positioning themselves to leverage on the government active participation in the fixed income market this year.

In February, just after the presidential election, which saw President Buhari reelected, bond market maintained a bullish run with increased demand from foreign portfolio investors, which caused yields lower 100 basis points to c.14.20 per cent on average from 15.21 per cent closing theprevious month. Analysts in Zedcrest Capital explained that the renewed interests from Foreign Portfolio Investors came mostly on the backdrop of a relatively peaceful conclusion to the presidential elections.

Meanwhile, last Thursday, yields was slightly lower by six basis points due to some buying interests on the 2025s and 2036s bonds.

“We, however, witnessed slight selling interests persist on the 27s and 28s. We expect yields to