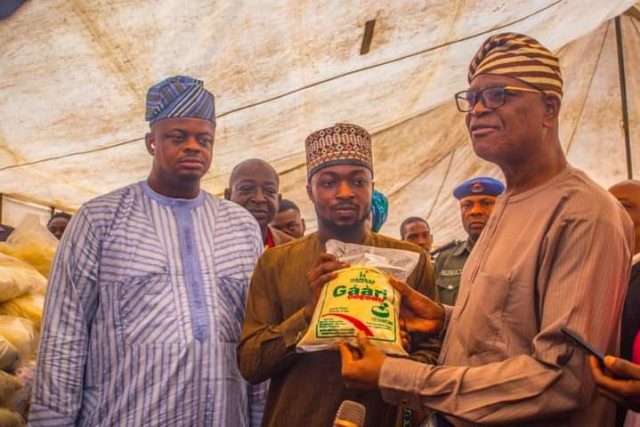 The monthly Food Support Scheme initiated by the Administration of Osun State Governor, Adegboyega Oyetola aimed at cushioning the socio-economic effects of COVID-19 pandemic has once again been commended by young entrepreneurs who are into local production of stable foods in the State.

The highly-excited young entrepreneurs also extolled government for providing an enabling environment and sustainable template for their businesses to thrive, saying the gesture has rekindled their hope for a better tomorrow.

They said the hands of patronage extended to them by government towards the actualisation and sustainability of its monthly food support scheme would go a long way to further encourage youths to put in their best and boost the local production of goods in the State and beyond.

Osun government had reiterated its readiness to support youths who are interested to go into agriculture, saying, “there is wealth in farming”, as it flagged off the distribution of the 11th edition of the food support scheme.

The young entrepreneurs had been contracted to make the supply specialised in the production of food commodities such as garri, cassava/yam flours, banana flours, pando-yam among other stable foods.

Addressing journalists during the 11th flag-off of the scheme at the open field of the Local Government Service Commission at Government Secretariat, Abere, Osogbo, one of the local entrepreneurs who supplied a significant amount of gari to government for distribution, Mr. Raji Ahmed Adekunle, hailed Governor Oyetola for providing quality leadership and demonstrating capacity and high sense of seriousness to harness and explore the potential embedded in the youths for the growth and development of the State.

Adekunle said the inclusion of his venture in the list of those that supplied gari to the government has helped to expand the scope of his business for maximum capacity.

He said: “Recently, I was invited by the state government to be part of those that would supply gari in large quantity. We have done this and as you can see, we were able to meet up with government expectations in this regard.

“To me, this is highly unprecedented and commendable as it will go a long way to encourage us to continue to do our business, expand our production capacity and extension and create employment opportunity for others.

“So, this initiative is well appreciated, as far as I am concerned. When I was contacted and later contracted for this, it first came as a surprise because I was surprised that someone like me that resides in Ode-Omu could be found worthy to supply gari to government.

“I find it very surprising that the State government will be so magnanimous to recognise my little efforts in far away Ode-Omu. With this alone, I have been elevated by the project as this would go a long way to project ‘Garri- Ode-Omu’ to the world and beyond.

“It is also worthy of letting the people know how magnaniomous the government has been to us to have approved a take-off grant to execute the production. Indeed, this is very unprecedented because it is a plus to us as a people.

“I will advise the government to continue with this project because the impact is being felt across the nooks and crannies of the state. Take for instance, I have more than 12 local women working directly and indirectly for me and the implication is that these women have as well benefitted from this project.

“The dividends of democracy have been extended to them and they are very happy. In fact, they passed a positive remark on the present Administration.
So, if they could do that, then imagine how the government has impacted my project and my personal life. I will advise that the government continue to do things like this to enhance society.”

Similarly, Mr. Azeez Tajudeen Olayemi; Alhaja Bola Alabi and Mr. Wale Afolabi who are among the young entrepreneurs that supplied the commodity to government, expressed gratitude to Governor Oyetola for his keen interest in advancing local productions.

While flagging off the 11th edition of the Scheme, Governor Adegboyega Oyetola called on youths in the State to create interest in farming as his government is poised to revive the sector to actualise its economic diversification.

Governor Oyetola who was represented by the Secretary to the State Government, Prince Wole Oyebamiji, said the distribution of garri has helped to complement the economy value chain projected by the government.

“Our Administration is a government of the people, by the people and for the people. As such, the Governor has great interest in the growth of the economy of the State.

“The production of gari being produced locally by our people is an attestation to the fact that there is wealth in farming. This will be an encouragement to boost farming, grow our economy and provide employment opportunity for our people.

“We are proud to do it, and we are not regretting it. This will not in any way relegate other staple foods that we have adopted for distribution. We believe we should encourage local productions too.”

In his remarks, the Commissioner for Special Duties and Regional Integration, Engr. Olalekan Badmus said the Administration of Governor Oyetola would continue to sustain the scheme.

Badmus who assured that the Administration was committed to reactivate local productions called on the young ones to take maximum advantage of the opportunity provided to develop themselves individually and collectively.

“You will agree with me that this is a noble step to ensuring that local content is actually achieved. This has been able to allow the garri farmers, that is, the cassava growers and gari processors, to benefit in one way or the other.

“To arrive at this noble gesture, we are able to identify young entrepreneurs who are into various staple foods productionsm. In the course of meeting one of the entrepreneurs, it was actually discovered that he deliberately went to his town to look for what he could be doing to contribute to the development of his community where he later came up with the production of ‘Garri Ode-Omu.’ This is worthy of emulation.”

“The cassava farmers, gari processors and others who are involved in the production were very happy and have a sense of belonging.

“I can assure our people that we have enough quantity to distribute for this edition. We are not resting on our oars. We will still need to go back to see how we can incorporate other sustainable commodities into the scheme. We will continue to be innovative.