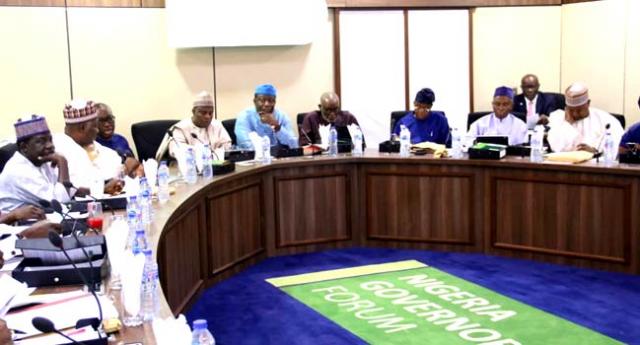 Following the recent hijacked nationwide protest against police brutality, the Nigerian Governors Forum (NGF), says it is set to review the internal security situation in the country and the status of the disbanded Special Anti-Robbery Squad (SARS) operatives.

In a statement on Tuesday, the governors said this will be done at a Teleconference meeting scheduled for tomorrow.

Recall that the nationwide demonstrations had resulted in indiscriminate looting of warehouses for CACOVID palliatives after it was infiltrated by suspected hoodlums.

Below is a full text of the statement…

Governors of the 36 states of the federation will be reviewing the internal security situation in the country and the status of the disbanded Special Anti-Robbery Squad (SARS), whose activities in some parts of the country led to the recent nationwide demonstrations.

These two items form the fulcrum of the invitation to Governors to join the 21st NGF Teleconference meeting which is scheduled for tomorrow Wednesday 4th November 2020, according to the Director-General of the Nigeria Governors Forum, NGF, Mr Asishana Bayo Okauru.

As usual, the Chairman of the Forum and Governor of Ekiti State, Dr John Kayode Fayemi will remark on the most contemporary issues affecting the country since the last (20th NGF Teleconference) meeting.

In this regard, the Ekiti State Governor will be addressing his colleagues on several issues including a feedback from the Villa on the UBEC counterpart funding as schools are beginning to reopen nationwide and the 50th anniversary of AREWA which took place in Kaduna at the weekend where the chairman and a host of northern governors were in attendance.

Also on the agenda for discussion are the HORASIS meeting with the president, a partnership between the NGF and HORASIS a management consultants’ consortium, to set up a strong Foreign Direct Investment initiative for the country, a webinar on privatization to be jointly driven by the NSE, NGF and the NIPC among others.

Only one presentation is on the schedule for Wednesday’s meeting. It is the Digital Curriculum Initiative for Basic and secondary Education ingeniously tagged the e-Gamma solutions ltd.

Before the floor is open for any other business, the regular updates on the SFTAS program and the Governor Ifeanyi Okowa Committee which liaises between the PTF on COVID19 and the NGF will both provide an update.

Governors are expected, according to the NGF Director-General, to join the virtual meeting at 1:00 pm as proceedings commence at 2pm prompt.