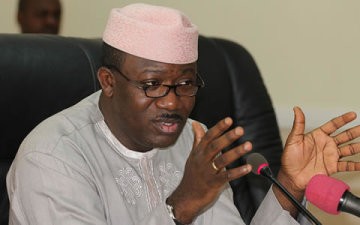 Governor Kayode Fayemi, of Ekiti State has denied the existence of the controversial security vote in the state.

The governor was speaking on Monday, during a forum in the state capital, Ado Ekiti, as part of efforts aimed at bridging communication gaps and regularly engaging the youth in the state.

“What most people refer to as security vote, the government does have contingency funds, such funds are used to address emergencies that may come up at any point in time. That is what we use sometimes in buying vehicles for police,” he explained.

Fayemi also disclosed his salary to the inquisitive youths.

The Ekiti State helmsman also seized to opportunity to assure youths that other issues raised will be accorded attention.

Members of the Youth in Commercial Agriculture and Development in Ekiti State (YCAD) and other related groups present, asked the governor to intervene in issues of accessing some approved benefits and support meant for farmers, lamenting that some agents of government have created bottlenecks.

They also demanded compensation for youth farmers who had their farmlands destroyed over a year ago by some herders.

In response, the governor promised to take immediate action on some of the issues.

He also noted that the employment issue raised by some of them has a national dimension which must be handled holistically. However, he said the state will look beyond government employment and explore other areas to create jobs.