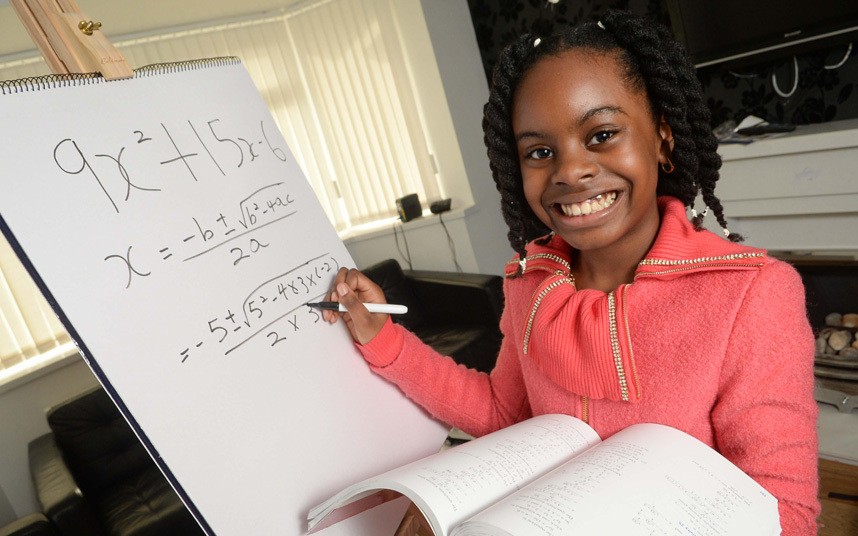 Talented 10-year- old Esther Okade who is enrolled at the Open University, a UK-based distance learning college, in January is already at the top of the class, having recently scored 100% in a recent exam.

Esther, one of the youngest college freshmen is from Walsall, an industrial town in the UK’s West Midlands region.

To Esther, mathematics is so interesting. “I want to (finish the course) in two years. Then I’m going to do my PhD in financial maths when I’m 13. I want to have my own bank by the time I’m 15 because I like numbers and I like people and banking is a great way to help people.” She said.

“I actually wanted to start when I was seven. But my mum was like, “you’re too young, calm down.” After three years of begging, mother Efe finally agreed to explore the idea

Esther has always jumped ahead of her peers. She sat her first Math GSCE exam, a British high school qualification, at Ounsdale High School in Wolverhampton at just six, where she received a C-grade. A year later, she outdid herself and got the A-grade she wanted. Then last year she scored a B-grade when she sat the Math A-level exam.

Esther’s mother noticed her daughter’s flair for figures shortly after she began homeschooling her at the age of three. Initially, Esther’s parents had enrolled her in a private school but after a few short weeks, the pair began noticing changes in the usually-vibrant youngster.

Efe says: “One day we were coming back home and she burst out in tears and she said ‘I don’t ever want to go back to that school — they don’t even let me talk!’

“In the UK, you don’t have to start school until you are five. Education is not compulsory until that age so I thought OK, we’ll be doing little things at home until then. Maybe by the time she’s five she will change her mind.”

Esther’s mother started by teaching basic number skills but Esther was miles ahead. By four, her natural aptitude for maths had seen the eager student move on to algebra and quadratic equations.

And Esther isn’t the only maths prodigy in the family. Her younger brother Isaiah, 6, will soon be sitting his first A-level exam in June.