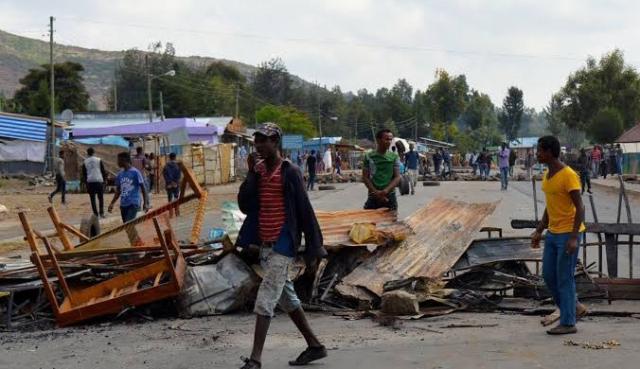 About 100 Ethiopian soldiers have been treated for gunshot wounds at a hospital in the country’s northern Amhara region, a medical official said Sunday, pointing to intense fighting in the country’s internal conflict.

A communications blackout in Tigray makes official statements on the conflict difficult to verify, yet on roads in the northern part of Ethiopia’s Amhara region ambulances can frequently be seen ferrying wounded combatants to hospitals.

In the town of Sanja, 98 government soldiers have been treated for “gunfire” injuries, a doctor told AFP.

“We have had 98 cases. All of them are soldiers from the national army,” said the doctor, who spoke on condition of anonymity.

He said there were no fatalities at the hospital, but noted more serious cases have been transported to larger hospitals in the city of Gondar and elsewhere.

Reports of dead and wounded soldiers have mounted in recent days in Amhara region, where a humanitarian aid worker said three died and 35 were treated on Saturday. On Friday 105 were reported injured and five killed in the region.

They coincide with growing fears of civil war after Abiy, last year’s Nobel Peace Prize winner, sent federal troops and aircraft into Tigray in a major escalation of a long-running feud.

Abiy ordered airstrikes on military assets in the regional capital, Mekele, last week, while warning more would be on the way and urging civilians to avoid gatherings to limit “collateral damage.”

A UN advisory distributed Sunday morning reported an “ongoing air strike in Mekele” close to the airport, with an update specifying “there was only one strike heard and the related ripost [sic] from the ground.”

The key base is one of the most heavily armoured in the country, a legacy of Ethiopia’s war with neighbouring Eritrea which borders the Tigray region.

Berhanu also said federal forces had “completely captured” four towns in western Tigray, where much of the fighting has reportedly been concentrated.

Ahmed had on Nov. 4 ordered the military to respond to an alleged raid on an army camp in the restive region and placed it under a six-month state of emergency. Tigrayan leaders responded by banning flights and warned they’ll respond to any acts of aggression. A failure to de-escalate the situation would be a grave setback to efforts to maintain national unity and keep a lid on ethnic violence in Africa’s second-most populous nation, according to Bloomberg.

1. What sparked the conflict?
Abiy said Tigray People’s Liberation Front forces assaulted a military base in the northern town of Dalsha and were defeated by the army, which is now planning further operations. The TPLF, which governs Tigray, didn’t acknowledge responsibility for such an offensive, saying only that the federal government attacked it with the help of foreign forces and that it would defend itself, Bloomberg reported.

2. Why are ties so tense?
Relations between Tigray and Abiy’s administration have been strained since he took office in 2018 and set about consolidating power under his newly formed Prosperity Party. That sidelined the TPLF, which had been the nation’s pre-eminent power broker. Tensions ratcheted up after Tigray staged regional elections in September in defiance of a directive to postpone them because of the coronavirus pandemic, and the federal parliament retaliated by ordering the Treasury to halt direct budget support to the regional administration. Tigray’s leaders have also been angered by the federal government’s attempt to reshuffle the military leadership stationed in their territory and calls by the nation’s House of Representatives to designate the TPLF as a terrorist organization.

3. What’s the background to the animosity?
Africa’s oldest nation state, Ethiopia has long been plagued by discord between its more than 80 ethnic groups. The country was an absolute monarchy until the 1974 socialist revolution that deposed Emperor Haile Selassie. It became a multi-ethnic federation in 1991, when a TPLF-led alliance of rebels overthrew the Marxist military regime that followed Selassie. The Tigrayans, though comprising just 6% of the population, dominated national politics, infuriating the bigger Oromo and Amhara communities. Hailemariam Desalegn quit as prime minister in 2018 after failing to quell violent protests that began in late 2015 and claimed several hundred lives. The ruling Ethiopian People’s Revolutionary Democratic Front named Abiy, an Oromo, as his successor.

4. How’s Abiy handled the situation?
The prime minister’s rule started off with a bang. He scrapped bans on opposition and rebel groups, purged allegedly corrupt officials and ended two decades of acrimony with neighboring Eritrea — an initiative that won him the 2019 Nobel Peace Prize. He also put out the welcome mat for foreign capital to maintain momentum in one of the world’s fastest-expanding economies. But he’s struggled to keep the peace. Besides the dissent in Tigray, he’s had to contend with violent protests after the June 29 killing of popular Oromo musician Hachalu Hundessa, which claimed about 200 lives. Inter-communal fighting in the western Benishangul-Gumuz region in September left at least 140 people dead and drove more than 25,000 others from their homes. Ethnic conflict continues to simmer in the Amhara region, and attacks and abductions perpetrated by militia groups in parts of the central Oromia region show no sign of letting up. A number of key opposition leaders have been arrested.

5. What’s at stake for the economy?
Ethiopia’s $107 billion economy has expanded more than 9% a year over the past decade as investment flooded in, making it one of the world’s top performers. The International Monetary Fund expects the growth rate to slip to 1.9% this year due to the pandemic. Investor sentiment took a hit from the protests after Hachalu’s slaying, dimming the prospects of a rebound, and a military showdown in Tigray would make a bad situation worse. There’s also a risk that the government could be distracted from its plans to open telecommunications and state-dominated industries to outside investors. Unilever NV, Diageo Plc and Hennes & Mauritz AB (H&M) are among the companies with operations in Ethiopia.

6. How ugly could this get?
Very. The Tigray region is already heavily militarized because of its proximity to Eritrea, which fought a war with Ethiopia from 1998 to 2000. The Northern Command that’s situated in Tigray comprises more than half of the armed forces’ total personnel and mechanized divisions, according to the International Crisis Group.

7. What are the regional implications?
The Tigrayan authorities have undermined the peace deal Abiy struck with Eritrea, refusing to ensure the removal of troops from disputed territory. And there’s a risk a showdown between the regional and national governments could further undermine the already shaky detente or even spill across the border. There could also be repercussions for other Horn of Africa nations. Ethiopia is a major power broker in the region, with peacekeepers in Sudan and South Sudan and troops in neighboring Somalia fighting militants linked to al-Qaeda, and it could redirect military resources to quell internal dissent.