The Edo State chapter of the All Progressive Congress (APC), has said the state governor and candidate of the People’s Democratic Party (PDP) in the September 19 governorship election in the state, Mr. Godwin Obaseki, declined to participate in debate because he is has no record of achievements to defend.

Prince John Mayaki, chairman of Edo APC campaign council who said this on Wednesday, noted stated that the Nigeria Elections Debate Group was forced to call off its scheduled debate between contenders in the governorship race, after Obaseki announced a sudden pull-out from the debate, citing unpreparedness.

“The debate, previously scheduled for September 2, with the candidate of the APC, Pastor Osagie Ize-Iyamu, among the first to confirm his attendance, will no longer hold,” he said.

“It was the first of debates meant to showcase the contenders, particularly candidates of the two major parties, before the electorate to speak directly about their manifesto and answer difficult questions on their intentions and the viability of their plans for office.

“Obaseki is ashamed of his poor records and he is unable to defend them, without first perfecting his script of half-truths and lies. The governor is terrified of the prospect of being confronted with his failures in four years, hence his cowardly pull-out, on the grounds of lack of preparation.

“Incumbents who performed in office seize any opportunity to showcase their achievements to the people, especially in national debates meant to deepen the democratic culture and offer the electorate a front-row seat at an event where those seeking their votes are made to answer difficult questions on why they are deserving of the office they seek.

“But in the case of Obaseki, having failed in all ramifications, most notably his central promise of creating 200,000 jobs, he is playing hide and seek with organisers of debate events, citing unpreparedness and campaigns.

“The sad truth is that Obaseki is never prepared for anything, including governance. To debate, he needs his thousands of aides, most of whom he hired at the dawn of his forgettable tenure, to help him perfect a script of lies and untruths.

“He (Obaseki) does not have a known or documented manifesto. His comical MEGA (Make Edo Great Again) plan, which in any case is an admittance of failure, was hurriedly put together as a response to the widespread criticisms of his lacklustre campaign and the lack of any documented policy promise. Since the launch they staged where Obaseki mumbled, stuttered and unwittingly betrayed the fact that he was also seeing the paper for the first time, we have not heard anything of it.”

Mayaki said Obaseki knew he could not spend an hour at a debate without name-calling.

However, speaking during a visit to palace of the Oba of Benin yesterday, Obaseki said he was never invited to any debate and could not have pulled out of a debate he didn’t know about.

Meanwhile, in what was a rare sign of peace amid rising political tension in the state, Obaseki and his major rival, Pastor Osagie Ize-Iyamu, embraced each other for the first time in many months at the Palace of the Oba on Wednesday.

Oba Ewuare II, the Oba of had convened a peace meeting which had in attendance various leaders of the PDP and the APC in Edo at his palace in Benin City.

Notable among those in attendance are the PDP candidate, Obaseki; the APC flagbearer, Ize-Iyamu, former APC national chairman, Adams Oshiomhole; his predecessor, John Oyegun, and the state Deputy Governor, Philip Shaibu, among other political actors in Edo. 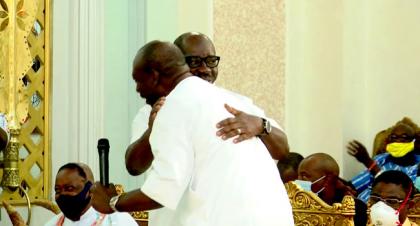 Shortly after all the attendees were seated, Obaseki, Ize-Iyamu, and others went before the traditional ruler to pay homages to him