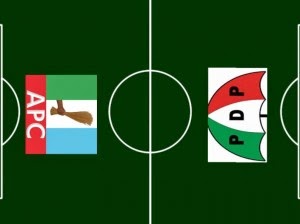 The Peoples’ Democratic Party (PDP)is now in trouble over the on-going mass defection which is yet to be abated and also boosting the ego of the All Progressives Congress(APC) which those leaving the party are going into.

The defection from the PDP of members and prominent ones for that matter to the ruling party has become so worrisome which is making Nigerians to speculate that the present government of President Muhammadu Buhari may have planned to turn Nigeria into a one party state, or may want to elongate his tenure based on the statement of his Media aide Garba Shehu that he would rule till 2023 and beyond.

The other members of the APC too have not helped the situation by boasting that before the next general election in 2023, Nigeria would witness unprecedented mass defections from various political parties, especially the main opposition, the PDP, which has never happened before in the political history of the country.

One of those whose boasting could not be waved aside or taken lightly is the chairman caretaker Extraordinary Convention planning Committee of the APC who is also the governor of Yobe State, Mai Mala Buni who declared when the Governor of Cross Rivers State, Ben Ayande joined the party that the APC would shock Nigerians with the numbers of defections that would be the largest in the political history of Nigeria.

Buni’s statement was a weighty one because he is a formidable force to reckon with, also he is regarded as one of the confidants of President Muhammadu Buhari, who single handedly appointed him to lead the party, though, in an interim position but refused to go when its tenure expired.

Before him, the Governor of Kogi State Yahaya Bello had said that a lot of oppositions would join the APC which he said is the most democratic, with the rule of law and equity and which would be more than a pleasing home for Nigerian politicians to rest and carry out their political activities without fear or favour.

Judging from the available records the rate of the big wigs who had left the PDP is alarming, especially in the South.
Those that first made their exit from PDP in the South especially the South West are the former governor of Ogun state and his followers Otunba Gbenga Daniel, followed by the former Speaker of the House of Representatives Dimeji Bankole and recently the former Deputy governor in Osun State Senator Iyiola Omisore.
In the East a great shocker came with the exit of the Governor of Eboyin state David Umahi in November last year 2020.The exit from PDP few weeks ago by the Cross Rivers State Governor Ben Ayade did not actually come as a surprise.

It has been foreseen by the PDP who accused him of romancing with the ruling party and this fuelled the speculations that he had already gone but he denied that he was still with the PDP. So when he finally made his intention known and declared openly at a ceremony celebrated by the APC, it was actually not a surprise.

Those whose exits actually jolted the PDP most when they did were that of its former National Chairman Banabas Gemade and the former Speaker of the House of Representatives Yakubu Dogara.

As if that was not enough especially from the North, dumping of the party by the governor of Zamfara State Bello Matawalle the least expected who the party laboured so much to put in power, and that of the members of House of Representatives devastated the PDP.
Sources placed the blame on the leadership of the PDP as an opposition party which failed to live up to the expectations of the people as an alternative to the alleged failed APC.

It was argued that if Nigerians, were to conduct a new election in 2023
People see the leadership of Uche Secondus national executive as unserious that lack the drive, zeal and wherewithal to drive the party.
It was believed that Secondus leadership has brought division in the party than the previous leaders who were able to command respect and wedge the party together.

Although some people believed that the party is in this situation because it is not in power, other school of thoughts believed that despite that, a party that has been in power for 16 years out of the years of the ongoing political dispensation should have learnt the act of party cohesion, organisation a formidable opposition and be a big threat to the present ruling party that took power from it.

It was also believed that Secondus has been the major problem of the party with his divide and rule tactics while he and his members in the executive were accused of being too money conscious without paying proper attention to the running of the party.

The accusation against Secondus has been for long and there had been moves to remove him before now, although his tenure would expire in December 2021, there were still frantic efforts to remove him because some people in the party were of the opinion that if this was not done before his tenure expires, his activities and the ways he is holding the party could lead to its total collapse before December.

According to the Governor of Cross Rivers, Ayade, he believed that the present leadership of the PDP has failed and could not provide the impetus to move the party to the next level.
The same with the Ebonyi state governor.
That of Matawalle seems to be different allegation against him was that he joined APC to avert banditry in his state which he denied. But observers believed that his exit was centered on the same arguments with his counterparts in Cross Rivers and Ebonyi states.

One of such people who said he was speaking for others in the party is a member of the House of Representatives from Taraba State Hon Rimande Shawalu Kwewum who called on Secondus to resign immediately.
In the letter dated July 6, 2021, and titled, ‘In the Interest of Our Party, Democracy and the People of Nigeria: Time To Do The Needful, the legislator, who is representing Donga /Ussa/ Takum/ Special Area Federal Constituency in Taraba State, criticised the Secondus-led National Working Committee of the PDP.

On the way out of the current state of the PDP, Kwewum said, “Parents sacrifice for their children. Leaders sacrifice for the good of the people they lead. History is replete with examples of leaders who have had to leave their positions so that the people they lead will survive or prosper. In several of our cultures in Nigeria, leaders who lead their people into disastrous circumstances commit suicide.

“I plead with you sir to show leadership today and in the interest of the party, your good name, and the future of Nigeria to resign immediately as National Chairman.

Meanwhile efforts and reactions are being made on the issues at stake and the present position of the PDP. The Board of Trustees (BOT) of the party met recently with the Governor of Enugu State Ifeanyi Ugwuanyi on critical matters affecting the party.

The spokesperson of the BOT and former Senate President Senator Adolphus Wabara expressed concern about the situation in the party and promised that things would be put right while the party is also pursuing how to achieve peace.

Also commenting on the state of the PDP the National Vice Chairman of 4he party in the South South Mr. Dan Orbih said the PDP supposed to be the next hope of Nigerians and as expected should be a strong opposition party.

“Honestly all hands must be on deck and those who are sleeping on duty should wake up from their slumber to save People the horrors of bad governance. As an opposition we must rekindle the hope of frustrated and disappointed Nigerians that PDP can do better and not allow APC to turn Nigeria into to a one party State.”

In his own reaction, Chief Ebenezer Babatope said that only a traitor in PDP would leave the party to join the APC because “Nigerians are already fed up with the party and are stoning them everywhere for bad governance, banditry, nepotism and ethnicity which have never happened before in Nigeria.”

But his counterpart in the PDP, Kola Ologbandiyan, has said the party is providing the necessary opposition and would not relent in exposing the atrocities of the PAC government.