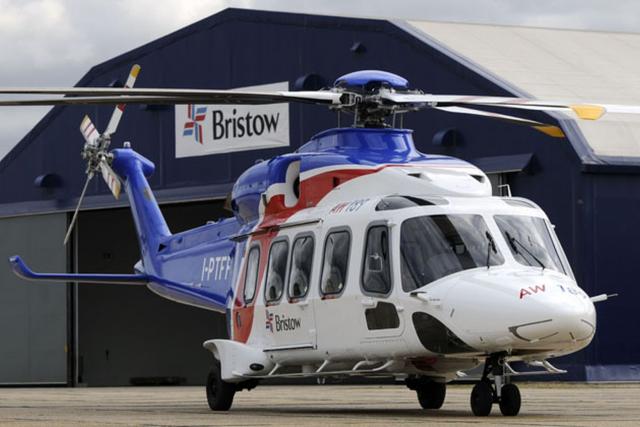 Business Hallmark reliably gathered that workers are agitated over pay disparity and poor conditions of service for Nigerian pilots and engineers compared to their expatriate counterparts who work for the same firm, among many other grievances. The development snowballed into a major crisis on August 3, 2020, when aggrieved workers embarked on a nationwide industrial action to press home their demands.

Supported by other aviation workers under the aegis of the National Association of Aircraft Pilots and Engineers (NAAPE), they shut the operations of Bristow Helicopters across the country. NAAPE also ordered its members in the airline to withdraw their services indefinitely until all the pending issues involving their welfare are resolved.

It said its affiliate, the United Labour Congress (ULC), had also directed that aviation fuel would not be    supplied to the Bristow Group during the period in solidarity with the workers. The protesters displayed placards with inscriptions such as “Racism in Bristow must stop’; ‘No to forced labour’’ and ‘Stop violating our rights and privileges’, among several others.

Some of the protesting workers who spoke with BH during a visit to the airline’s office besides the General Aviation Terminal (GAT), Murtala Mohammed Ariport in Lagos, claimed the management had been unfair to Nigerian staff, who do the same job as the expatriates but earn less. They alleged that while the company pays expatriates their full remuneration in dollars, it benchmarked salaries of Nigerian pilots and engineers to an obsolete rate of N345 per dollar.

“The rate (N345) at which they pay us is not obtainable in any foreign exchange window in the world. To worsen the situation, while we get paid at the rate of N345 per dollar, the management expect us to buy tickets at N460/$ from the same salary.

“While they sell forex to expatriates at NAFEX rate, the management refused to grant us the same privilege when we asked. The same expatriates come into Nigeria, get trained and get their full pay. But we locals don’t get the same treatment”, one of the protesting pilots, Captain Emmanuel Omokore lamented.

The Public Relations Officer, National Association of Aircraft Pilots and Engineers (NAAPE), Mr. Frank Igwe, while addressing newsman, said the strike and picketing were unavoidable  as the union had exhausted all avenues of bringing their to the management’s attention.

“I don’t think we are asking for too much. What we demand is the correction of the disparity between welfare of Nigerian pilots and engineers and that of their expatriate counterparts.

“These people (expatriates) you are seeing learn from us the nationals. Meanwhile, the management gives them preferential treatment. They give them accommodation, pick them from their houses to the office, while our people are there suffering,” the visibly angry Igwe stated.

While corroborating the workers allegations, NAAPE President, Galadima Abednego, said the union had been in a frosty relationship with Bristow for over four years despite several interventions by the Federal Ministry of Labour and Employment, the FederaI Ministry of Interior, and the Nigerian Civil Aviation Authority (NCAA).

He accused the Bristow’s management of discriminating against Nigerian pilots and engineers and abuse of the nation’s expatriate quota law. He further disclosed that while continually training expatriates to hold top and strategic positions in perpetuity, the management had continued to deny qualified national engineers promotion into senior positions.

“Therefore, the least position acceptable to the law is ratio 1:2 in favour of Nigerians,” the union leader said.

According to him, the management also refused to implement the negotiated Conditions of Service and had declared some Nigerians redundant without any justification.

Apart from the allegation of pay disparity between Nigerian and expatriate workers, the workers also alleged that Bristow has refused to train qualified persons for Airline Transport Pilot License (ATPL) and failed to fully reimburse individuals who have successfully completed their ATPL through self-sponsorship.

This they insisted is a deviation from the agreement in place at the time and disproportionate matching and capped reimbursement cash figure for self-sponsored pilots on ATPL with an employment bond of N30 million. Others are laying off of young cadets and trainee engineers with the hope of a promised career in the company after several years of sacrificial toiling.

Meanwhile, the management of Bristow Helicopters denied all the allegations leveled against it by its workers, insisting the industrial action was without due notification to Bristow and in violation of the relevant labour laws. It accused NAAPE’s leadership of inaccurate allegations to support their action.

“Contrary to NAAPE’s assertion that all negotiations have broken down, the company remains willing and prepared to continue dialogue with NAAPE but NAAPE have elected to abandon negotiations to embark on a strike action which is both illegal and unwarranted.

“NAAPE has highlighted some issues as being “under contention” and it is necessary to clarify these issues, most of which arise out of an agreement executed in 2019 between Bristow and NAAPE (“the 2019 Agreement”).

“Bristow proposed to put a ‘pause’ on the Pilots and Engineers Conditions of Service (COS) negotiations recognizing the recent global outbreak of COVID 19, the plummeting of global oil prices and the mandatory 22% OPEC cuts to Nigeria’s crude oil production – all which have had a significant impact on our business and capacity utilization in Nigeria.

“It is important to state that notwithstanding the economic challenges in the aviation industry since the spread of COVID-19 Bristow pilots and engineers have remained the best paid in their industry and have not suffered any reduction or change in their salaries, at a time when operations have reduced by 50%.

“In the 2019 Agreement, the parties agreed the relevant exchange rate at which the salaries of Bristow Pilots and Engineers would be calculated. In the agreement, both parties agreed on NGN345/$1 (at a time when the CBN exchange rate was NGN306/$1) with a provision for adjustment if the NAFEX rate moves in either direction by 20% or more.

“Currently, the NAFEX rate has not reached the agreed threshold.  Bristow has fully complied with the provisions of the agreement with NAAPE.  By its demand, NAAPE is seeking to act contrary to the legally binding agreement it signed voluntarily.

“In the signed 2019 agreement, Bristow committed to full sponsorship of up to four senior first officers SFOs within a financial year for their ATPL course, dependent upon operational requirements and the prevailing market realities.

“Three individuals were identified, and the process of training commenced. Unfortunately, and through no fault of Bristow, the selected individuals were unable to obtain the necessary travel and study visas.

The lingering crisis, experts argue, could further disrupt the nation’s volatile oil and gas sector that is just coming back to life from the impacts of the Coronavirus pandemic. An oil and gas expert who spoke with our Correspondent in Lagos, Festus Ighodalo, warned that the crisis could disrupt operations in the petroleum industry if it is allowed to fester.

“Bristow’s capabilities and aviation training solutions are unmatched in the industry. Apart from providing fixed-wing with rotary-wing flight connectivity in Nigeria, Bristow offers convenient point-to-point scheduled and charter transportation services to clients transferring workers offshore. It will be unwise to allow the protest to linger”, Ighodalo stated.

It would be recalled that workers of the company had i2016, downed tools while protesting against unfair and mindless policies of its management.

The then National President of NAAPE, Isaac Balami, and the state Chairman of the Trade Union Congress (TUC), Chika Onuegbu, who led the demonstrators, had disclosed that for the past 10 years, Nigerians working as pilots and engineers with Bristow had endured untold suffering due to unfair and mindless policies of its management.

“They treat the pilots and engineers like they are in a slave camp. You will see a co-pilot who just has 200-hour experience from the United Kingdom, South Africa and Canada earning far more than their Nigerian counterparts who have been working for years. A job that a Nigerian can do, they sack him and give it to a foreigner and pay him more”, Balami had stated.

In the meantime, the crisis has continued to fester. On Wednesday, August 5, 2020,   Bristow announced the sacking of 100 pilots and engineers. The airline blamed its decision on the negative impact of the pandemic on its operations. It also noted that it would use this period to restructure all aspects of its business model.

While describing the downsizing exercise as painful but inevitable, it said it was done in order to ensure the continuity of its business and delivery of essential services to its clients. It further stated that it had engaged the National Association of Aircraft Pilots and Engineers (NAAPE) in order to negotiate a fair and equitable redundancy compensation for all those that will be affected by this exercise.

The aggrieved workers are also not backing down, insisting that they will not relent in their agitations until their demands are met.