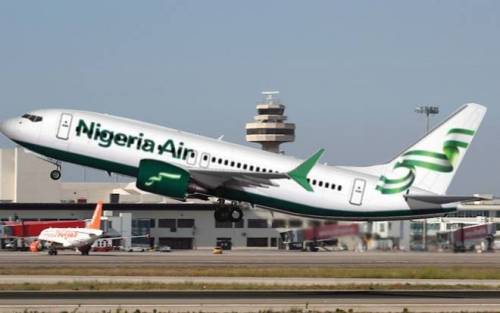 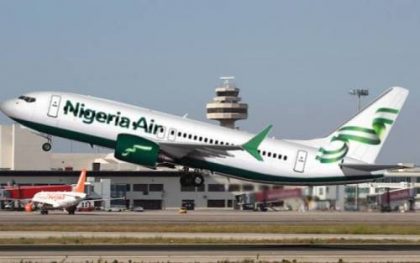 The crash of Nigeria Air

Nigeria, since the beginning of the President Muhammadu Buhari administration, has become a large theatre of the absurd – not that it has ever been a sane country though – and last week, another episode of the drama was ‘screened’ by the Minister of State for Aviation, Senator Hadi Serika, who announced, rather unsurprisingly – for those who understand the issues –  that the recently unveiled Nigeria Air had been suspended.

Serika’s announcement generated outrage, in part because the Federal Government had ignored counsels to the contrary and on July 18th, amid fanfare, resurrected the ghost of the defunct Nigeria Airways when it unveiled the “national carrier,” Nigeria Air at the Farnborough Air Show in far away London. An exercise that was said to have gulped over N1.5billion, only to announce last week, four months before the scheduled December operation kick off date that the still-born airline had been suspended, indefinitely.

“It is,” as veteran columnist and administrator, Akogun Chief Tola Adeniyi observes, “just a tiny bit of Buhari’s absurd government.”

Indeed, there is little about the national carrier that doesn’t appear absurd, and perhaps, the only reason it was announced in the first place, as feelers suggest, is for the administration to raise money through the backdoor for the 2019 general election in which President Buhari is seeking re-election.

“They used it to launder money,” a source told BH. “It’s only a money laundering scheme. Government doesn’t operate like that.”

The more things change, as is often said, the more they remain the same. Former National Security Adviser, Col. Sambo Dasuki remains in jail for allegedly using $2.1billion arms money to run former president Goodluck Jonathan’s campaign in 2015. But ahead of 2019, the government which promised change is treating Nigerians to more shenanigans than the previous ones.

Many things went wrong with the unveiling of the Nigeria Air on July 18th this year. Not just the very bizarre decision to hire Bahrain based expatriates to design its logo which could easily have been done, and better too, by Nigerian artists. And the idea that the best place to announce same is in London.

But importantly because the very decision to announce the airline in the manner that it was, was an illegality. The Minister had no business proceeding with the announcement without obtaining a go ahead from the Federal Executive Council (FEC). He did, nonetheless, only to return last week to say that the reason it was being suspended was in part, because the “Federal Executive Council has taken the tough decision to suspend the national carrier project in the interim.”

But even more interesting is that the government which will hold a meagre five percent share in what is apparently public private partnership – a model that has, by the way, never worked in Nigeria due to government ineffectiveness and insincerity as exemplified in the Lagos-Ibadan Expressway and the Nigeria Airport Terminal Two – would proceed to announce the date for the commencement of the airline’s operation without having secured the investors and indeed, without the would be investors making an input in that regard in a business they would control majority share.

Deriving from this abnormality is the idea that a largely private sector company can be referred to as National carrier when the government holding is mere five percent. Most national carriers have at least 40% public share ownership to so be called.

“Some of us feel that the ownership structure is wrong,” notes aviation consultant and economist, Mr. Taiwo Adenekan. “The five percent (government share) is too small; although the government may have its reasons.

“What we are asking now is that they should be more transparent in the process and that they should carry all stakeholders along. If they did so, I’m sure they would not have run into the challenge they have now.”

But it remains a point to ponder: which serious foreign investor will bring his capital to invest in Nigeria given the present business environment?

Yet, the secretive manner the business was being handled raised some ethical questions about its transparency. And with foreign investors as its target, there is the fear that a national institution may be unwittingly mortgaged to outside interests.

“I believe the minister had other motives apart from national interest of Nigeria,” says former Managing Director of Lagos State Property Development Corporation (LSPDC), Mr. John-Bede Anthonio. “The minister should be sacked for this dubious scheme.”

Recent reports on Nigeria by both the Intelligence unit of the Economist Magazine and HSBC can simply be summed up as President Buhari’s government not being investor friendly. In other words, what obtains in Nigeria presently is a hostile business environment. And with the incomprehensible huge fines on MTN, the reasons for their conclusions may not be far-fetched.

The government typically hit back at both organizations, rejecting the Economist’s prediction of the president’s likely defeat in 2019 and ultimately employing their well rehashed anti corruption line to hit back at HSBC which they accused of helping Abacha to launder money – never mind Buhari had maintained before now that Abacha never stole Nigeria’s money.

Such propaganda will work with a half-literate and illiterate support base, and may indeed serve the intended purpose of winning elections. But it won’t work with informed investors who rely on verifiable statistics and are circumspect with their money. Which begs the question, “Who are these potential investors?”

A good number of Nigerians accept and indeed advocate that the country should have a national carrier.

“The Government should appoint a consultant to execute the mandate. I still believe in the national airline project,” Mr. Adenekan says. “If it has been suspended, government must have a reason which they haven’t detailed to us.

“Suspension doesn’t mean cancellation. They have to go back to the drawing board and adjust one or two things which they may have gotten wrong.”

The underlying point in both submissions is that the government got the process wrong, apparently so. The first thing that ought to have been done if the government was sincere about having national carrier would have been to clear debts and other obligations due to staff and other stakeholders of the defunct Nigeria Airways, both national and internationally.

Indeed, there were already threats from the workers union of the defunct Nigeria Airways over outstanding terminal benefits totaling about N45 billion. And for obvious reasons, the new entity will bear the international liabilities of the defunct airline.

With the benefit of hindsight, two of the last aircraft in the defunct Nigeria Airways were impounded in Brazil and in Florida, USA over uncleared obligations.

Nigerians have, in any case, continued to express their dismay over the Minister’s announcement, with many insisting that minister should honourably step aside or be shown the exit door for what they called mindless waste of public funds.

“I think it’s better to put pressure on Hadi Sirika to resign and face prosecution,” wrote Facebook user, Yusuf Kuchi. “Some ministers actually have nothing to offer the country.”

US based professor of Communications, Farooq Kperogi was more elaborate: “Buhari’s fraudulent National Carrier to Nowhere went like this: its unimaginative $600,000 (N180 million) logo was designed in Bahrain by foreigners. The logo was ‘unveiled’ in London. But the whole Nigeria Air was suspended in Nigeria. Why didn’t the aviation minister go the whole hug and announce the suspension in London?”

While the pidgin English platform of the BBC added a lot more hilarity to it all.