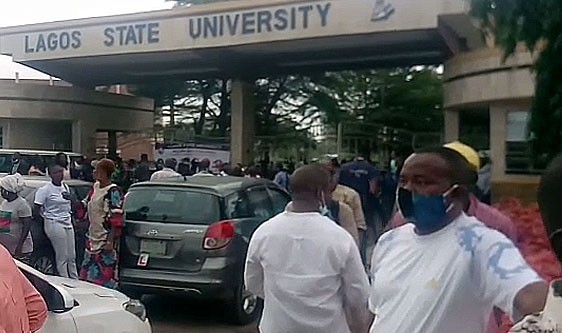 This is even as ehicular movement was hindered by the protesting members unionists who gathered as early as 7:00 am.

Those locked out of the school include the Vice-Chancellor of the University, Professor Olanrewaju Fagboun.

Attempt by the Vice-Chancellor to dialogue with NLC, ASUU, NASU members was not successful, as they insisted that no one would be allowed into the university premises until their demands are met by the state government.

They claimed that an increment in their salaries was promised by the Lagos State government more than a year ago.

Babajide Sanwo-Olu, Lagos State governor, had announced that tertiary institutions in the state will be reopened today,  September 14, 2020 after been shut for six months due to the COVID-19 pandemic.