While most talk about Nigeria’s rising debt profile has focused more on overall national debt, sub-national debts, or the debt proportion owed by state governments are fast assuming worrying proportions. Recent figures by the Debt Management Office (DMO) shows that debt owed by state governments and the FCT as at March 31, 2019 stood at N3.97 trillion, with Lagos State which has N542 billion debt leading the pack.

But even worse, the coming on board of new state governments in various states on May 29th has revealed further debts not yet captured by the DMO. Evidence from reports of transition committees showed that a number of states have more than doubled their debt profiles within the last four years, usually, with little to show in terms of infrastructure.

DMO data covered debts incurred by states through official borrowings such as multilateral and bilateral foreign and local financial institutions, investment securities like bonds and treasury bills, but not debts incurred using local contractors, suppliers, and consultants, which from evidence is a handful.

Reports of transition committees in Lagos, Borno, Imo, Yobe, Zamfara, Bauchi, Gombe, Ogun, Kwara Adamawa, Nasarawa and Oyo, where there were change of guards in government, show that among the states, domestic debt stock rose by nearly 200 percent, from N412.98bn in 2011 to N1.37tr as at May 2019.

Within the same period, the states also increased external debt stock by 81 percent from $1.75bn to $2.16bn. Five former governors: Abiola Ajimobi of Oyo, Abdulaziz Yari of Zamfara, Ibrahim Dakwambo of Gombe, Jibrila Bindow of Adamawa and Mohammed Abubakar of Bauchi were reported to have left behind over N612bn in debts.

Particularly, Zamfara State transition committee said Yari left behind a debt of N251bn. On the other hand, Dankwabo left behind N110bn in debts, Bindow N115bn and Abubakar N136bn.

Recently, Oyo State Governor Seyi Makinde disclosed that Ajimobi left behind over N150bn in debts. Interestingly, these debts were accumulated even while the governments were getting substantial amounts as Paris Club refund, and some good sums as IGR and from Federal Allocation. 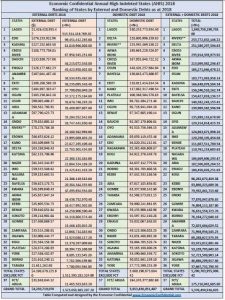 But Lagos stands out as the richest state in the country, with revenue constituting 13 percent of of the combined total revenue of all the other states, and more than those of three geopolitical zones individually.

A recent report by the Nigeria Extractive Industries Transparency Initiative (NEITI) showed that while Lagos got N501.2bn as revenue from both IGR and FAAC in 2018, the whole of South East comprising Abia, Anambra, Ebonyi, Enugu and Imo got N340.1bn; North East comprising Gombe, Borno, Yobe, Adamawa, Bauchi and Taraba got N351.5bn; North Central comprising Benue, Kogi, Plateau, Niger, Nasarawa and Kwara got N378.7bn.

Lagos’s revenue for the year was 15 times more than that of Osun, which at N33.2bn, had the lowest revenue of all the states. But while Lagos boasts of this comparatively robust revenue base, it rather surprising that it has entered into a debt crisis of sorts. With annual revenue of N501bn, the state cannot pay off either of its domestic or external debt if it were to use its entire annual revenue to pay debts.

However, the state is still the shining light. Osun with annual revenue of N33.2bn has domestic debt profile of N147bn and external debt profile of N37bn, which is closer to the situation in most of the states. Within the past four years, many of the states had to rely on Paris Club refund to be able to meet their salary obligations, and even with it, states like Benue, Kogi, Imo, Osun, Abia, and 10 other states have not been able to meet salary obligations. 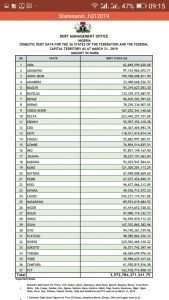 For most of the states, both IGR and FAAC allocation combined cannot meet their salary obligations. For instance, figure from the NBS showed that in 2016, 30 states generated a total of N516bn in revenue, but spent N1.4trn on wages. The balance of course, came from borrowing and such interventions as Paris Club refund.

Few months ago, the Federal Government paid the final tranche of the Paris Club refund, meaning that henceforth, states won’t have funds to fall back on. And with many states already reaching the limits of their capacity to borrow, analysts say these are troubling times as the states would no longer be able to meet basic obligations going forward.

“Most of these states are insolvent. Unfortunately, a state cannot be bankrupt; otherwise I would have used the word bankrupt. If they were corporate organizations, I would have said they are bankrupt,” said Dr. Vincent Nwani, investment and business analyst.

“They are insolvent to a level where they cannot easily meet their short term basic financial obligations. At some point, these states may not be able to borrow again. By the time rating agencies begin to rate them, they may no longer be able to borrow.

“And that’s where we are going. It’s already happening. Some of the state governments that were able to access loans last year were asked to go and get federal government guarantee. Getting federal government guarantee is not just going to the executive; it has to come from National Assembly. It happened with Kaduna, and even with Lagos – as rich as the state is, it is still the most indebted State in the country.”

Yobe State recorded a total IGR of N23.94bn from 2011 to 2018; meanwhile, the states monthly wage bill is about N1.3bn, meaning that its IGR for seven years will be unable to meet its wage bill for two years. Borno State recorded a total IGR of N27.32bn in the last eight years, within which period, its domestic debt stock rose from N1.68bn to N68.38bn. Meanwhile, the state got N263.2bn FAAC allocations from 2013 to 2017.

“Governments cutting down their own personal expenditures have become necessary. There should be reduction in the fleet of cars, the rate of going abroad with huge contingent, etc.” Dr. Nwani said.

“On a number of occasions in Buhari’s first tenure, the federal government bailed out the states. But till now, states such as Kogi still owe workers. It’s a challenge, these are basic things. We are not talking about infrastructure yet.

“When you read the news everyday you hear how many SA and SSAs being appointed. The Ebonyi State government the other day said that about 10 thousand citizens are vying for advisory positions. Who are they advising?” he queried.

For Chief Emma Nwosu, former MD, ACB, the states no longer have much option.

“They (state governments) maintain fleets of cars, hundreds of assistants and all those have nothing to do. All that has to stop,” Nwosu said. “There is a lot of waste in government. I don’t know what they are still doing with security vote that is so opaque. We must begin to do things right if we must survive.”

But it’s not just the states. The federal government itself is heading towards another debt trap. A DMO report fortnight ago showed that within three months – between December 31, 2018 and March 31, 2019 – the country borrowed N560bn. And within four years, the country’s debt total – state and federal – has gone from about $11trillion to $25trillion. This, according DMO comprise N17trillion for domestic debt and N7.8trilllion for external.

“The issue of debt over-hang and debt crisis is not just a sub-national, it’s a national crisis,” Nwani said. “Over the last four years, Nigeria has doubled its debt from N11.8trillion to about N25trillion. This is a very big challenge.”

The authorities argue, however, that the debt stock is still low relative to GDP. In a presentation to investors in Washington recently, former Minister of Finance, Zainab Ahmed, noted that Nigeria’s debt, while it had risen in recent years, was still equal to just 19 per cent of gross domestic product in 2018, which is well below the average for emerging markets of just under 50 per cent of GDP.

However, analysts say the argument is deceptive because the revenue to GDP ratio is extremely low. Indeed, IMF data showed that Nigeria’s general government revenues were equal to just 5.7 per cent of GDP last year, far below the average of 22 per cent of GDP for the other 44 sub-Saharan countries for which the IMF collects data.

Nwani noted that the sad part is not the borrowing, but what the borrowed money is spent on. He regretted that there hasn’t been a corresponding relationship between borrowing and infrastructure development.

“It doesn’t correspond and that’s another worry. It is not really bad for government to borrow, but when government borrows, it is important to use the funds to finance projects that will benefit future generations who will pay back the loan,” he said. 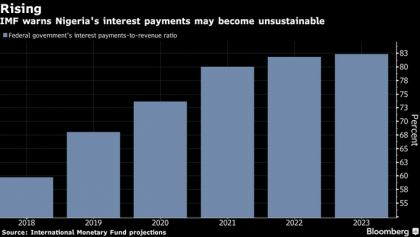 “Unfortunately we borrow to pay medical expenses and pay salaries. That’s the sad thing. We are not borrowing to invest, we are borrowing to consume and we don’t even consume them well. Most still go back to where we borrowed them from,” he said.