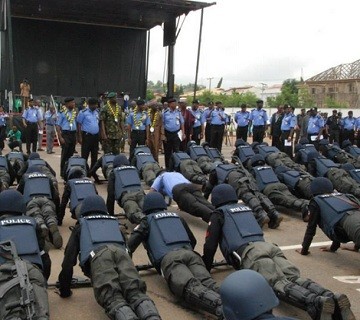 Global human rights body, Amnesty International has said men of the Nigerian police force have killed at least 10 protesters since the #EndSARS protest began in the country few days ago.

Nigeria has over the past few days, witnessed escalation of protests as mostly young people take to the streets to demand police reforms and for the disbanding of the police Special Anti Robbery Squad (SARS), a tactical squad accused of sundry human rights abuses.

Though the Inspector General of Police, Adamu Mohammed on Sunday, announced that SARS had been disbanded, it failed to quell the protests which continued on Monday.

In Lagos, a stray bullet allegedly fired by a police man attempting to disperse protesters in the Surulere area killed a bystander, while a protester was shot in the leg and is currently receiving treatment.

Amnesty Nigeria in a tweet via its twitter handle, @AmnestyNigeria said on Monday that not less than 10 protesters have been killed thus far.

The defendants were brought before a Magistrate Court in Abeokuta on Monday. However, the plea of the defendants was not taken. In the suit marked M/SC/29/2020, the police preferred four charges against the defendants. One of the charges read,

The police applied for an ex parte order to detain the three defendants for 60 days to allow them to investigate the case thoroughly. However, the court ordered that they be detained for 14 days.

The Ogun State Police Command had last week arrested 31 protesters. About 28 of them were released while three were charged.