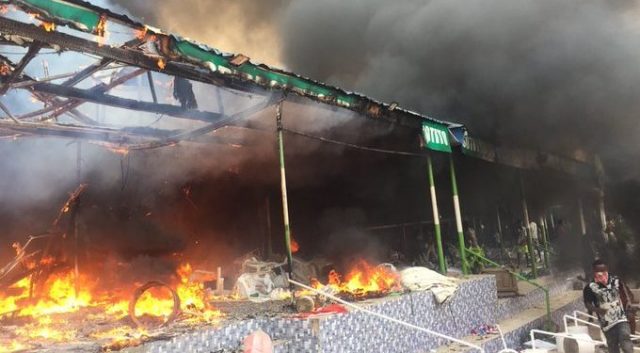 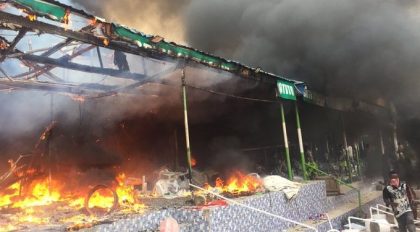 Two people have been confirmed dead in Akure when angry youths burnt down Sotitobire Miracle Church in Quarters, Akure, the Ondo State capital on Wednesday.
According to a police source, a policeman and a commercial motorcyclist met their untimely death during the attack.
Business Hallmark learnt that the youths stormed the church after the corpse of a one- year- old boy declared missing in the church some weeks ago was reportedly exhumed.
The policeman, it was gathered, was killed by the mob at the scene of the incident while the motorcyclist was allegedly shot dead by a stray bullet.
Sources disclosed that the one-year-old boy had gone missing boy during a church service in November. The little boy, Gold Kolawole, was kidnapped in the church and his whereabouts were unknown until Wednesday when it was alleged that his corpse was found and exhumed by security men.
However, another account stated that the residents of the area got angry when some pastors of the church started morning service on Wednesday. They attacked the church and one of the policemen manning the place was mobbed.
“The unlucky policeman was killed by the mob because the police failed to conduct a proper investigation on the matter”, a witness said.
The pastor of the church, Prophet Alfa Babatunde, is said to be in the custody by the Department of State Security (DSS.
Meanwhile, the Ondo State Police Command has asked residents to disregard the rumour that the body of the child was found in the church.
“The Ondo State Police Command wishes to inform the general public particularly the People of Ondo State that they should disregard the rumours making the rounds that the body of a recently declared missing boy in the state has been exhumed from Sotitobire church in Akure,” he said.
“It is most unfortunate that this misleading information spearheaded by a popular TV station, has ignited a spontaneous reactions from the people leading to wanton destruction of properties and injuries to many. The church building was also set ablaze by irate youths.
“Some of our officers despatched to the scene to contain the situation were pelted with stones with many of them sustaining injuries. Their patrol vehicle was also badly damaged. This rejoinder became necessary to disabuse the minds of many Nigerians who might have fallen for this wicked lies and propaganda,” the command’s spokesman, Femi Joseph, said in a statement.