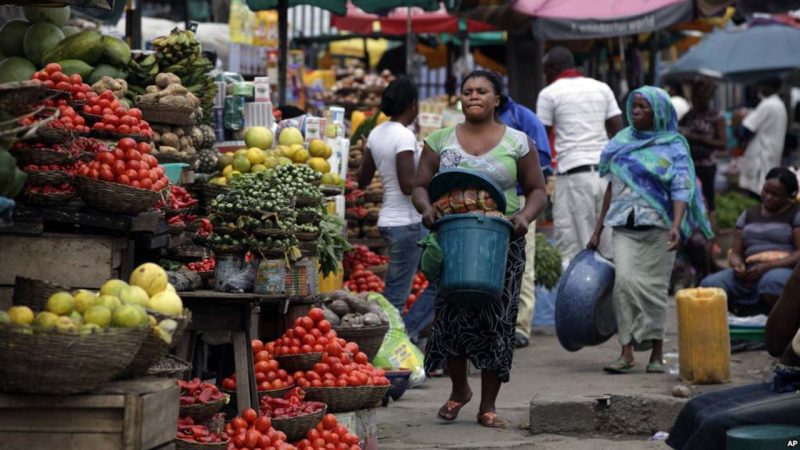 Nigeria could face a major food crisis, as the ongoing lockdown has hit the nation’s food baskets, BusinessHallmark findings revealed. Before the pandemic induced lockdown, the Food and Agriculture Organisation, a UN’s agency, had warned that seven states in the country face food crisis in 2020 as a result of the insecurity and the flood of last year.

The lockdown, which was declared by the Federal Government in Lagos, Ogun and the Federal Capital Territory (FCT) and by several state governments to halt the spread of the Covid19 in the country — has wreaked serious havoc, denying farmers access to their farms, as well as disrupting the evacuation of harvested goods to towns and cities across the country.

According to estimates by agriculture experts, more than three million tons of harvested crops are rotting in farms due to the unavailability of vehicles to evacuate them to the markets. Findings revealed that though, the agricultural sector is one of the sectors excluded from the lockdown, the sector has not been able to function well due to several reasons.

One of them includes the fear factor. Many produce buyers, truck drivers and their motor boys owing to the fear of contracting the dreaded disease, have decided to avoid making journeys to the hinterland to buy and convey goods.

While the bolder ones willing to embark on such treacherous journeys are hindered by overzealous security officials who harass and fleece them of their money. While some are lucky to only part with money some paid the ultimate price with their lives. Consequently, food prices have soared, leaving hapless Nigerians not suffering a lack of money, but high prices.

It would be recalled that on April 16, a commercial vehicle driver, Amobi Igwe, was killed by a trigger-happy officer of the Nigeria Security and Civil Defence Corps, Eke Richard, at the tollgate area of the Umuahia-Aba Expressway in Umuikea, Isialangwa South Local Government Area of Abia State around 7.10 am, while he was conveying food items, including rice and tomatoes to Aba.

Sources said the middle-aged driver demanded to know his offence, but the NSCDC officer allegedly shot him at a close range and ran into the police station near the Umuikaa junction to escape mob attack. Attacks and harassment like this from trigger happy law enforcement officers have forced many traders and commercial drivers off the road, further exacerbating the looming scarcity.

A foodstuff seller at Olanyi in New Oko-Oba, Lagos, Madam Rikisat Adebola, lamented that despite the exclusion of Ile-Epo Markert (a sole food produce market) from the lockdown, she and fellow workers could not find transportation for their goods.

“The last time I went to the market to buy pepper and tomatoes for sale, I saw hell. Our vehicle was forced to pay a bribe at more than ten checkpoints. He parted with over 3,000 Naira before he got to my place. At a stage, he had to take deplorable inner roads to avoid police checkpoints. At the end of the day, we were made to cough out the money he paid to policemen.

“When I called him three days later to come and convey goods for me, he declined, arguing that he spends over N10 000 to repair his bus the last time he took us through bad roads to avoid harassment from security.

“You can see that I am an old woman and cant trek from Ile Epo to Olaniyi. I now rely on junior colleagues to get goods for me to sell. This has resulted in a rise in the cost of goods. For example, a measurement of tomatoes we used to sell for N100 now sells for N200. It is what we see to buy that we are going to sell, she said.

Our Correspondent gathered that the situation is the same in most states of the federation.

While sellers could not find vehicles to convey their goods from the markets farmers are also reeling from the impact of the lockdown. According to findings, harvested goods now rot away in farms as most haulage trucks are off the road.Mostly affected were farmers planting perishable goods such as tomatoes, pepper, vegetables, and fruits.

A bulk tomato seller at the Ile Epo Market simply known as Tijani informed our Correspondent that the sudden rise in the price of cooking ingredients could be attributed to the restriction in movement of people and vehicles.

“I am a tomato farmer and trader from Kano. I run this business with my brother who is currently in Kano tending to our tomato farms. We used to interchange it. When I am in Kano, he is in Lagos to sell our goods. It is the other way round too.

“He just called me now (Thursday) that he couldn’t find trucks to bring our farm produce to the South. More than half of our tomatoes are rotting away in the farm. Thankfully, the rainy season has not fully started, so our women use the sun to dry those that we can save. If it continues like this, we might be selling a piece of tomato for N50 or more”, Tijani lamented.

BH findings suggest that if the situation does not improve, the losses could be huge because rice and wheat farming infrastructure like dams and canal irrigation system are running out of spare parts.

It was learnt that several Central Bank of Nigeria’s irrigation schemes especially in the northern states of Kano, Bauchi, Kebbi, Sokoto, Zamfara, Katsina and many others,  have been negatively impacted by the lockdown, as the needed equipment and personnel to service the projects are trapped and are unable to reach the farms.

According to an irrigation expert, Sylvester Telemi, irrigation system is a highly technical and complex business.

“It is like in construction. You need water engineers, technicians to install and service equipment such as pumping machines, compressors to boost water pressure, earth moving equipment and spare parts.

“As at Wednesday, several spare parts needed to maintain our complex irrigation infrastructure are still held up in Lagos and Port Harcourt, while some of the experts needed have declined to embark on journeys outside their safety zones”, he said.

Also, an official of the Federal Ministry of Agriculture, who spoke to BH on the condition of anonymity, said the shutdown of land borders with neighbouring countries like Niger and Chad will leave a toll on the country as the nation derives a large portion of its beef and grain requirements from these countries.

“We are facing a serious situation, the full extent and repercussions we are yet to be determined.

Nigeria and its neighbours are interdependent in terms of sharing food resources. We are bracing for the likely effects that it will have on crop production,” declared the official.

A development economist at the Nigerian Horticulture Institute (NIHORT), Ibadan, Dr Wande Turner, said the country is staring in the face a food shortage in the coming months.

“Agriculturally, Nigerians have been affected by the lockdown. Farmlands, particular in the South are being deserted. Unlike in the North where people stay several weeks or even months in the bush to farm,  most farmhands leave the city each day to work in farms, returning home later in the evening. They are now trapped by the lockdown, unable to move about.

“Nigerians should brace up as the development will surely affect food production this year. Also, food prices are likely to go up as Nigerians scramble for what is available”, he said.

The United Nations’ Food and Agriculture Organization (FAO), while also reacting to the disruptions caused by the Coronavirus pandemic, warned that it may trigger a “looming food crisis.”

While emphasizing that disruptions to the food supply are currently “minimal” and that “there is no need for the world to panic,” the FAO said that the global food system is likely to be affected over the next several weeks by the impacts of the COVID-19.

“We risk a looming food crisis unless measures are taken fast to protect the most vulnerable, keep global food supply chains alive and mitigate the pandemic’s impacts across the food system,” the agency wrote on its website.

The FAO said that border closures and disruptions to global trade are already creating logistical bottlenecks and that quarantines and shelter-in-place ordinances are keeping farmers and food processors from processing agricultural products, particularly fruits and vegetables.

Shortages of farming inputs like fertilizers and veterinary medicines can further impact food production. All of these factors are likely to cause “disruptions in the food supply chains” in April and May.

FAO said it was not only concerned about COVID-19’s impact on countries that have pre-existing hunger problems.

“Smallholder farmers everywhere are particularly vulnerable to the fallout from the pandemic, as they might be kept from their land by quarantine or other movement restrictions and their access to markets is also likely to be limited as long as the global food supply remains disrupted by the virus.”

It said countries most exposed to a rise in food price inflation include those with elevated imports as a share of domestic food supply, such as the Middle East and Africa. Economies with weakened currencies, such as Nigeria,  India and Indonesia are also exposed, as most commodities are denominated in the dollar on the international market.