Home Tourism Lagos Carnival: A show that lost its lustre 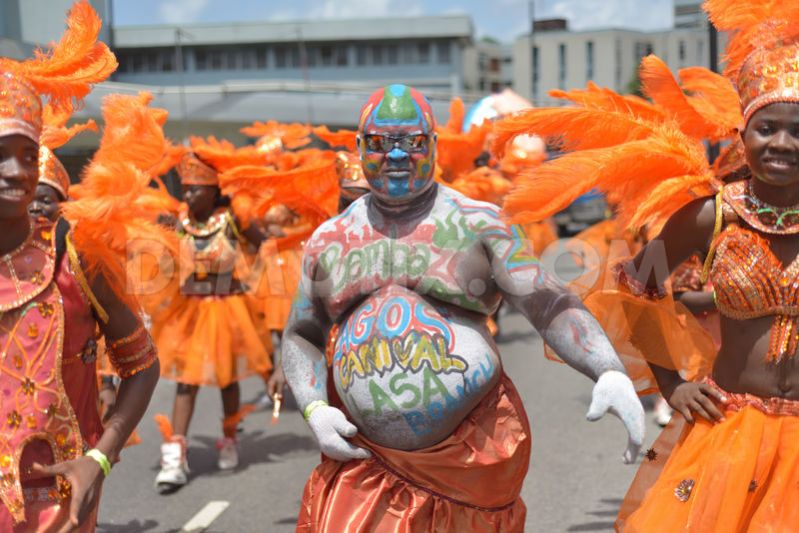 If what played out at the last edition of the Lagos Carnival is anything to go by, it is wise to concludethat the Lagos State Government,the organizer of the street carnival erred in staging a show that flopped. What ordinarily would have passed as yet another family show was characterized bypoor organisation, security breaches and lack of crowd control which eventually led to violence. OREDOLA ADEOLA, who was at the event,reports

For the first time after five successful editions of the Lagos Carnival being the grand finale of the Lagos Black Heritage Week, what used to be an event to look out for every Easter Monday ended leaving fun seekers disappointed and scores wounded. This year’s event based on the assessment of fun-seekers was devoid of excitement and thrills,and was largely characterized by poor organization and break down of law and order.

Similar incident had transpired during the carnival last year which left scores wounded due to disruption by urchins. The situation had been left unaddressed which further heightened the violence this year despite the presence of the security operatives. Apparently, the organizers appeared to have had challenge putting the show together, as some eventprogrammes such as children carnival and othersin the Black Heritage week were cancelled.

A member of the carnival team, who would not have his name in print, told our correspondent that the disaster which took place throughout the show could have been avoided if Mr. Holloway Disu, the Lagos State Commissioner of Tourism and Inter-governmental Affairs had heeded earlier warning by stakeholders to suspend the carnival due to poor fundingand logistic difficulties. The challenges according to our source was responsible for the shift in date for the carnival, from the original date April 6, Easter Monday to April 25 and May 2, but which eventually held on May 9.

The carnival which is always replete with pomp and pageantry was marred by violence, arising from the actions of street urchins who made their way to the venue due to the poor security measures put in place by the organizers. Despite high expectations of tourists and fun-seekers, the event started behind kick off time, leaving most of the guests who got to the venue in TBS around 10am stranded till about 2 pm when it later started. However, no reason was given for the delay by the organizer, but further investigation attributed the delay to poor preparation and attack on the carnival trains at Awolowo Road.

The first attack on the carnival train occurred during a procession of the OkoFaji Carnival group in front of the Warder’s Barrack in Awolowo Way, Ikoyi which was marked as the carnival routes. The attackers, who allegedly were residents of the barrack, molested the female revelers having been attracted by their costumes. Attempt by the some of the carnival coordinators to dissuade the attackers proved abortive as they were over-powered by the hoodlums, who later used dangerous weapons on them..

The Obalende and Isale-EkoWoro carnival groups who were not aware of the incident were also attacked leaving scores wounded with varying degrees of injuries. The attack on the carnival train however led to the late kick-off of the final parade as most of the carnival groups delayed for almost an hour after the security operatives who got to the scene of the incident about an hour later calmed the situation.

Captain LateefAdaji, a coordinator of OkoFaaji carnival group, told our correspondent, that the carnival train was attacked because the hoodlums intruded into the procession while attempting to sexually molest some of the female dancers.

“We made several attempts to appease them but we were over-powered by the street urchins who attacked us with dangerous weapons including machetes, axes and broken bottles. More than ten revelers were attacked and some have been hospitalised. The attackers also dispossessed some of the carnival revelers of their phones and wallets of some of the dancers.” he revealed.

One of the carnival revelers, Benjamin Olatunde, who was injured by hoodlums, blamed the government for the inadequate security provided on the mayhem.

However, the officials of Lagos State Emergency Management Agency, LASEMA, who later arrived at the scene forty-five minutes later, however took some of the victims to a nearby general hospital for further treatment.

According to the Lagos State Force Public Relation Officer,DSP Kenneth Nwosu, a water vendor who was at the scene of the incident was injured and later rushed to hospital by security personnel from Onikan Police station who promptly responded to the attack on the carnival train. He claimed that the carnival continued unhindered as no other incident happened. He added that his men are still investigating the incident that whosoever that is found culpable would face the full wrath of the law.

Poor attendance at the event was conspicuous as the sixty thousand capacities TafawaBalewa Square, venue of the final performance, for the first time, was barely filled as empty seats were noticed at the spectator stands.

Despite late commencement of the event, some of the carnival groups who managed to perform showcased great perfomances to the awe of the guests and fun-seekers. Meanwhile, the carnival procession was later put on hold to enable the address by the State Governor, BabatundeFashola. The governor also apologised for the change in date attributed the shift to the political activities which took place during the general election. He however promised that the 2015 edition which was the last he would be hosting as the governor of the state would be a great family day for all Lagosians including parents and children who had come out to have fun.

No sooner had he finished his speech than some of the elated fun-seekers disrupted the proceedings by breaking intothe barricades around arcade. The urchins who later hijacked the situation however disrupted performances by other carnival groups who were waiting to perform. Two disk jockeys, Kelexyand Jamalot who were performing during the event were attacked by the hoodlums who pelted both of them with cans of table water. This forced the event to an abrupt end.

Meanwhile, in another development, the OlopaKareta, a group of private security provided by the organisers for the security of fun seekers later apprehended two teenage boys who were in possession of pistols and other dangerous weapons which they used in scaring fun-seekers at the carnival ground. The boys were later handed over to the security operatives