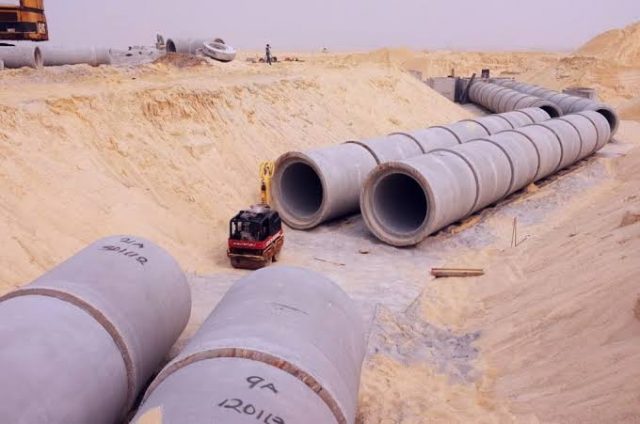 Governor Babajide Sanwo-Olu of Lagos State has expressed confidence that upon completion of the on-going construction of drainage at Ilubirin area of the state, the issue of flooding at the Lagos Island would soon be permanently resolved.

Sanwo-Olu gave the assurance during an inspection tour of some projects on the Island, which include: Cappa/Okepopo Adeniji-Adele Road construction, the New Massey Children Hospital, renovation of General Hospital, Odan and laying of three high capacity pumps at Ilubirin drainage site.

Members of the state executive council accompanied the governor on the four hours inspection tour around the facilities.

The governor expressed optimism on the prompt delivery of the Ilubirin drainage, saying with the level of works done so far, the contractors were working as scheduled.

At the General Hospital, Odan which is the oldest in the state, the governor said the renovations were being done in phases, adding that when completed the hospital would be able to accommodate more patients.

“We started the journey, the on-the -spot assessment of the reconstruction of Cappa/Okepopo and Adeniji-Adele Road in Lagos Island. The contractor said the project is about 60-65 per cent complete. They are on track to see if they can complete the project before the end of the year. Interlock stones have been laid, drainages have been largely completed The whole area looks new.

“Thereafter, we went to the construction of the New Messey Children Hospital where we noticed the two buildings that are meant to be coming up. Nine-storey car-park have started. The 10-storey main hospital for the children, pipes have been completed. They have assured us to keep up with the terms of the project.

“Thereafter, we crossed to Ilubirin pumping site. It is the ministry of drainage project. where we have current temporary walls, pumping is going on. It is to prevent water from Lagos Island. That is why you saw those pumping stations there. If they don’t do that barricading, water will naturally be flowing back from the lagoon. Since Lagos is below the sea level when the water rises from the lagoon, it can flow back into the city.

“The main observation today is we are constructing a new 1 kilometre or 1.2 kilometre diversion from the front of Ilubirin Housing Estate that will take body of water into the Lagos lagoon. Three high capacity pumps, I’m told will be arriving next month,” the governor stated.