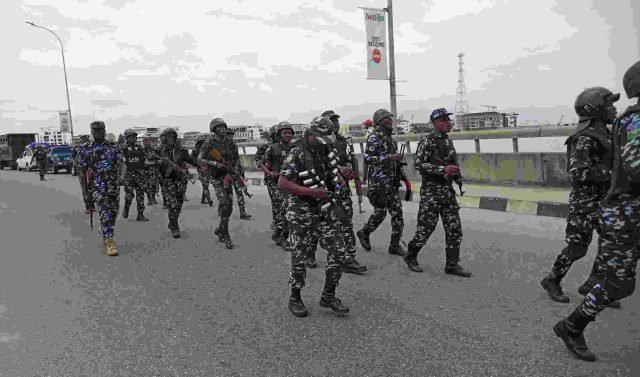 Witnesses said the security operatives have taken over Lekki Tollgate, Alausa and other locations ahead of the rally

“Law abiding citizens are encouraged to go about their lawful businesses.”

Recall that on Wednesday a Federal High Court sitting in Lagos State issued an order restricting the Labour Party and supporters of Obi, from converging at the Lekki Tollgate for the #Obidatti23 Forward Ever Rally.

The party and its supporters scheduled 1st of October, Nigeria’s Independence Day celebration for its mega rally ahead of the 2023 general elections.

Meanwhile, supporters of the Labour Party candidate under the umbrella of the Third Force Movement, has appealed to the Federal Ministry of Youth and Sports Development to approve the car park of the National Stadium Lagos for the rally.

They noted that the use of the stadium would avert unintended lockdown.

The Third Force Movement, in a statement by Mr. Olawale Okunniyi, said without the approval the organisers cannot stop Nigerians from using other venues like Gani Fawehinmi Park or Lekki Toll Gate.

“The proposed date of the rally is 1st October, 2022 from the hours of 6am and 7pm. We promise that the rally will be civil and peaceful and to achieve this we have made adequate security arrangements to safeguard the facility and the participants,” they assured.

However, 17 days after and few hours to the rally, The Third Force Movement said approval has not been granted.

Okunniyi said, “Please be notified that the Central Planning Committee of the Lagos 5 Million Man March/Mega Rally has just alerted the leadership of the 3rd Force Movement that in the event that the APC Government refuses to approve the use of the National Stadium, Surulere, Lagos for the peaceful Obi-dient Independence March/Rally holding tomorrow, Saturday, 1st October, 2022, the Organisers would not be able to stop Nigerians from making use of strategic venue like Lekki Toll Gate, and Gani Fawehinmi Freedom Park against all odds.

“Consequently, Leaders of the 3rd Force Movement have tried to intervene in this matter but the Federal Ministry of Sports under Mr Sunday Dare is yet to act positively.

“So, all well meaning Nigerians are implored to appeal to the Sport Minister to immediately bow to wisdom and allow the peaceful independence rally of Obi-dient Nigerians hold at the car park of the National Stadium, Surulere, Lagos as requested by the Organisers to avoid unintended jam in Lagos tomorrow.

“Finally, we as leaders of conscience in the Nigerian Civil Society and as Veterans of the assembly of the Nigerian peoples aned masses, hereby wish to assure that the Lagos independence march and the mega rally is planned to be very peaceful and orderly all things being equal, so government should avoid tacit instigation of confusion.”