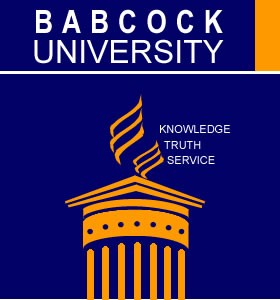 The 4th postgraduate convocation ceremony of Babcock University was held on Thursday, June 4,2015. Speaking at the event filled with dignitaries was Chairman of Heirs Holdings, the United Bank for Africa,Tony O. Elumelu C.O.N. His commencement speech was centred on “Employee, Employer, and Empowerer : Pathways to Success and Impact in an Uncertain World”

He acknowledged the Vice Chancellor and President of the institution, Prof. James Makinde for inviting him to speak at the ceremony. He also applauded the graduating students on the feat of being awarded another degree.

Narrating how his career in education began, he compared the similarities between when he graduated from school in 1988 and the present 2015.He said, “Nigeria– and much of Africa –was under military rule with no end in sight, and the Cold War was still very ‘hot’ with nuclear war still a very real and looming possibility. Oil price was around $15 per barrel. It was a time of global uncertainty, like we face today”

“Today, we are in the midst of another economic crisis. You have seen the headlines: youth unemployment rates are soaring, not just in Nigeria but across the Africa” he added

He stated that this generation has several opportunities he never had. “You have grown up in a highly connected and globalised environment: You have access to new technology, new ways of communicating and working together– numerous opportunities I never had as a student. Yet, some of you may feel like you lack what it takes to take advantage of these opportunities”

Speaking on ways to achieve success as an employee, he explained the need for empowerment which he stated as crucial, in his speech, he said “Empowerment isn’t just crucial for young people it’s crucial for everyone. In empowering others, we develop our country, our continent, and our planet.

When people graduate, the natural thing to do is look for a job. Sadly, a post graduate degree is no longer a golden key that will open doors at any workplace and have people falling over themselves to give you the job of your dreams. He added that a recent survey of CEOs in the UK highlighted their concerns that young people’s horizons were not broad enough for a globalised and diverse economy.

In a report by Philips Consulting, CEOs were not impressed with graduates’ ability to work on their own as well as their critical and analytical thinking skills.

Advising the graduants, he charged them on hard work, resilience and excellence. “Work hard so you can stand out. Hard work and excellence made my bosses Toyin Akin-Johnson and Ebitimi Banigo first notice, and then, subsequently, believe in me.

Speaking on employer/entrepreneur Phase, he spoke extremely on how several graduates have defied all circumstances in order to become what they want to be. “Some graduates went straight from University to a board room; young entrepreneurs are defying the economic down turn by launching their own enterprises”. This is happening not just in Nigeria, but all over the world. In the UK, a new generation of young business owners is leading the way out of the economic crisis, according to the annual Simply Business Start-up Index, which reveals a 29 per cent rise in firms started by 18-25 year olds since the recession took hold in 2008”

He spoke on entrepreneurship and how people can succeed by working for themselves. Three students defied ASUU and the prevailing challenges and circumstances at the time, and started Jobber man because it required little capital and there was a huge market for their product. Today, the firm is Africa’s leading online job site.

Entrepreneurship means you no longer have to wait to see who will give you a job, you can seize the opportunity to secure your future and in the process, create jobs and livelihoods for others. Entrepreneurship is how we become masters of our destiny and tackle the serious challenge or ill that poverty and mass unemployment pose to the stability of our societies and economies.

On leveraging success to empower the next Generation of African Leaders, he explained that in entrepreneurship, it’s important to remember that it’s a long-term journey and that nothing is ever easy or perfect. You can start with an idea and over time you can refine it as the market or demand changes. If you are waiting for the perfect time, you may never get started.

Like the team that founded Jobber man, they can identify gaps in the market for specific products and services. Yet, many of these budding entrepreneurs often lack the capital, the networks, the training or the support to take their strong small business to national or regional scale.

Sharing a word of motivation, he elucidated on the need of not being deterred by race or religion “Do not allow your religion, ethnicity or nationality to become the chains that limit your vision, your network and your ambition. Rather, use them as bridges to expand your world by embracing their common principles of humanity, solidarity, charity, honesty and the search for the common good” he said.

He added that all the principles will enable them live anywhere, befriend anyone, trust the best in everyone and bring down all barriers and boundaries.