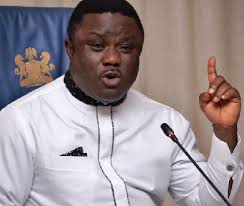 Cross River State governor, Prof Ben Ayade, said that state is collaborating with the Central Bank of Nigeria (CBN),and the Dantata Group to create 20,000 agro-based jobs for young people in the state.

Ayade, who disclosed this when officials from the Dantata group and the CBN visited him in Calabar, said, “The meeting between CBN and Dantata group and indeed Cross River State is to cement a factor and create opportunity first for livestock, cattle and poultry.

“I have made an offer of job opportunities to 20,000 young people with immediate effect but you are actually going to be your own employer.

“We will provide the money; we have signed an agreement with CBN, they will provide us money to support 20,000 young farmers.”

According to the governor, the young farmers would be deployed to cotton production, livestock, maize and soya beans farming, rice farming, cocoa processing, groundnut cultivation among others.

Ayade said the state and Dantata group would set up an abbatoir in Obudu cattle ranch ‘aimed at growing cattle, production of beef and exporting it within the West African sub region’.

He said his administration was taking the lead in agro-industrialisation because ‘this is the only way we can create jobs and reduce youth restiveness and allow young people to realise their full potential’.

According to him, with massive arable land in Nigeria, it was an anomaly for the country to continue to import food.

In his remark, the leader of the Dantata team and CEO, Dantata Food and Allied Product Company Limited, Alhaji Tajuddeen Dantata, said his company was delighted to partner with Cross River in agro production.

He said the time had come for Nigeria to take its destiny in its own hands in terms of food production.