There is growing concern over the effects of U.S. Federal Reserve’s decision to raise its benchmark interest rate, would have on the Nigerian economy as experts expect investors to take a flight. Investors are usually looking out for areas of higher returns and greater political stability.
The Federal Reserve unanimously voted to increase rate to a range of 1.7-2 per cent, which is the second in the last six months with likelihood of further rise before the end of 2018. The increase in U.S. interest rate would spur foreign investors to repatriate their funds, thereby mounting pressure on the country’s foreign exchange market and depleting its external reserves in the process.
The naira would likely take a hit in the coming days as investors are already taking this into cognizance, pricing the dollar at N363.47 for May 29, 2019 at the FMDQ OTC FX Futures Contract, compared to $/N361.12 it traded on Wednesday.
The jacking up of interest rate by the US Federal Reserve means some fund managers who are active in emerging markets, not just Nigeria, will want to withdraw their funds to invest in a safer environment, claimed Mr. Johnson Chukwu, Managing Director, Cowry Asset Management Ltd in an exclusive telephone chat with BusinessHallmark.
“Some of them have been arbitraging – they borrow at a lower rate there and come to play in the emerging markets. With the rate increase, the arbitrage margin will thin out, because they factor in exchange rate devaluation and depreciation, they would realize they the margin that drove them to the emerging markets has thinned out.
“So, those that have been leveraging to play in emerging markets would sell their investment and pay up tier loans because of the interest rate that has gone up,” he explained further.
The Nigerian Stock Exchange (NSE), which was one of the best performed markets in 2017, has declined -9.38 per cent in the last few months in the year on the back of profit-taking and capital repatriation by foreign portfolio investors, who are weary of the political environment due to the forthcoming 2019 general elections. However, the Nigerian stock market has appreciated 2.06 per cent year-to-date.
But Guy Czartoryski, Head, Research, Coronation Merchant Bank believes the Nigerian equities market has other drivers, and one of its attractions is that it does not correlate with global markets, adding that the world economy is undergoing an important shift from very low rates in the U.S. to what can be described as a normal interest rate environment there. 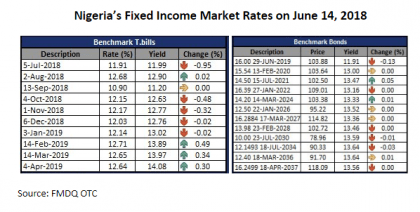 “The US rate increase would take a hit on the equities market as there would be capital inflow reversal, because foreign investors, who dominate the market would take flight to safety,” Omoefe Eromosele, Analyst, Afrinvest (W/A) Ltd told BusinessHallmark.
She noted that country’s fixed income market has more local players, so, there won’t be knock-on effect as a result of the U.S. rate hike.
“Because our market is an emerging market with high risk and high returns, there won’t be much outflow from the market,” she argued.
“There has been under subscription in the instruments that the CBN has been offering. So, in the second half of the year, there may be slight adjustment in rates to increase the appetite of investors. The coupon rate may go as high as 17-18 per cent”.
The CBN has maintained a 12 per cent coupon rate on Open Market Operations instruments, which is 200 basis points below the benchmark interest rate of 14 per cent. And yields on Federal Government bonds have continued to drop, averaging around 13 per cent. 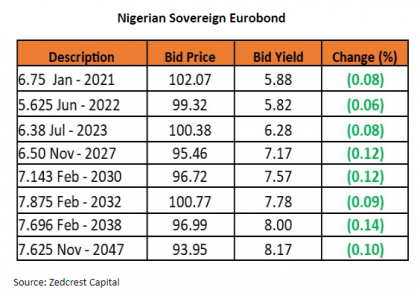 FSDH Research believes that the government will finance the N1.95tr deficit in the 2018 budget through issuance of bonds (local and foreign) and this may put upward pressure on yields. It estimated that the government may source about N1.05 trillion from domestic bond market while about N901 billion may be sourced from the international market to fund the budget deficit.
The U.S. rate increment means Nigeria would have to pay more to raise fresh Eurobonds. The country would spend 23.34 per cent of its’ N8.612 trillion 2018 budget for debt servicing. Federal government owes N12.59 trillion local debt and $14.8 billion external debt in 2017.
The country’s debt is about 20 to 23 per cent of its Gross Domestic Product (GDP) and 38 percent of budget, which made the International Monetary Fund (IMF) in a recent report to express concern over Nigeria’s ability to sustain this huge debt burden.
Paris Club granted Nigeria $18 billion debt relief in 2005, saving it from a debt overhang. But the massive borrowing that the country has engaging in the last three years has made analysts to worry that it is heading towards another debt overhang. This government has shot up the nation’s debt from N11 trillion in 2014 to N21 trillion.
“The recent rate hike by the U.S. Fed means we would most likely continue seeing FPI outflows, and this serves as the basis to which the MPC may not cut rates in July. I personally think the only window the MPC may have to cut rates this year, may be in July, because inflation may trend back up in H2 2018.
However, why would they do that if it could lead to more FPI outflows. We saw other emerging markets like Argentina who raised interest rates twice in a week to 40 per cent in reaction to higher U.S. treasury yields and a stronger dollar.
“On the other hand, it would mean that the next Eurobond issuance by the FG as proposed in the 2018 budget would be more attractive on account of higher yields and may once again be oversubscribed. This would then mean the CBN would be sufficiently equipped to continue to support the naira and continue to maintain fx liquidity which could serve to improve investors’ sentiments on the Nigerian economy,” posited Abayomi Ajayi, Research Analyst, EDC Securities Ltd.
For Mr. Johnson, the U.S. rate hike may not affect existing Eurobonds, but the country would have to pay more to issue fresh dollar denominated instruments.
“One area to look at is the Federal Republic of Nigeria’s external borrowings. The secondary market yields of FRN U.S. dollar-denominated Eurobonds have edged up this year. This is largely due the upward trend in US rates.
“We believe the FRN will be able to access the U.S. dollar Eurobond market again this year, but the rate will be higher than earlier, and the volume may have to be somewhat lower than initially planned,” Mr. Czartoryski reasoned.
He noted that Naira Treasury Bill rates will remain attractive to U.S. dollar-based investors, but questioned if foreigners would want to hold them during the electoral cycle in 2019.

“For Nigeria to sustain the interest foreign fund managers, the CBN and DMO will have to increase rate on Federal Government bonds and Treasury Bills, which will push up local market interest rate. If the CBN and DMO don’t do anything on interest rate, then you would have decline in inflows, which could lead to pressure on the exchange rate and foreign reserves.
“And if the government decides to respond by raising rates, this would lead to up pick in local currency returns,” the Cowry Asset Management boss elucidated. 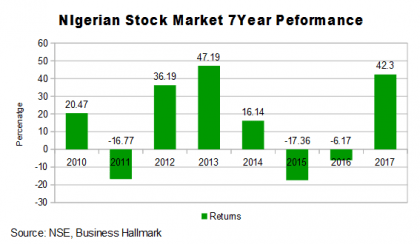 The government and organized private sector have been mounting pressure on the Central bank to cut interest rate, which it has pegged at 14 per cent since July 2016. But the apex bank has argued that inflation rate was still on the high side.
However, the country’s inflation rate has declined for the 16th consecutive month to 11.61 per cent, lowest since February 2016. The CBN targets a 6-9 per cent inflation rate for 2018.
To checkmate inflation from accelerating, the CBN has maintained a tight monetary policy, which has taken serious toll on the real sector, which has been grappling with the high cost of fund.
The apex bank had hinted that it may lower interest rate later in the year, when inflation rate would have decelerated significantly. On the other hand, Ayodele Akindele, Head, Research, FSDH Merchant Bank, projected that the CBN may review rates upward by the fourth quarter of this year as antidote to pressure on the naira, which will be propelled by capital outflow from the country, due to the U.S. rate hike.
According to the Head of Research, Coronation Merchant Bank, “A significant part of Nigeria’s Naira-denominated risk-free securities are held by foreign investors and logic suggests that CBN must increase interest rates dramatically to keep the investors.
“However, we believe the CBN will keep interest rate rises to the minimum, while allowing a degree of foreign exchange reserve deterioration if foreign investors either sell or do not renew their Naira fixed income positions ahead of elections in February 2019. We think that the CBN would tolerate a degree of parallel exchange rate deterioration, if this results.”
However, the apex bank has insisted it is well placed to continue to defend the local currency, even though depleted marginally by -0.35 per cent in the last one month to $47.63 billion on June 13, observers believe that this trend will continue with the coming polls and unless local situation is altered.