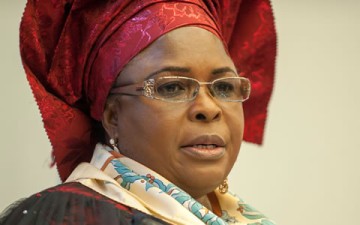 AN Abuja High Court will on Thursday commence hearing of an application brought before it by eight women seeking to restrain the First Lady, Mrs Patience Jonathan, from holding an emergency meeting of African First Ladies Peace Mission (AFLPM) in Abuja on Friday.

The plaintiffs, who include Nana Module Onwodi, Ekemma Ugborough Arisa, Louisa Ono Eikhomun and Deborah Oboh, claimed that the said emergency meeting called by Mrs. Jonathan was called in ‘bad faith’ as it is aimed at scuttling any chance of the incoming First Lady, Mrs. Aisha Buhari, becoming the President of AFLPM.

Joined as defendants in the matter were Juliet Mene, Juliet Pearce, Sonia Adolf and Kate Duru.

The matter, which was supposed to come on Wednesday for hearing, could not go on because the procedure for proof of service was not completed.

The trial judge, Justice Husseini Baba-Yusuf, adjourned the matter till Thursday to enable a lawyer, Mr Mohammed Ahmed, file an affidavit of service and attach the Proof of Service to the said affidavit averring that the service had been effected on the defendant, Mrs. Jonathan.

‎”You should have filed an affidavit of service and annex the Proof of Service. The document does not speak for itself. Normally, if it is service on a party directly, you file the copy endorsed by recipient party. But if it’s service by substituted means, you file an affidavit to say pursuant to the order of substituted means, we have effected service. I will adjourn to tomorrow (Thursday), May 14, to enable you file the affidavit of service. Your application will be taken tomorrow (Thursday),” Justice Baba-Yusuf ruled.

‎The plaintiffs had filed a writ of summons for themselves and and on behalf of concerned Women for Peace and Development, seeking to stop the emergency meeting called by Mrs. Jonathan, which they said was aimed at picking a new president of AFLPM from among the other African first ladies to succeed her.

They explained that the defendant stepped into the shoes of president of AFLPM‎ after Turai Yar’adua stepped down following the death of her husband and then president, Umaru Yar’adua.

The plaintiffs averred that the tenure of office of president of the mission is three years, which is expected to end in July 2015 and therefore any attempt for the defendant to convene a meeting to elect a new president would amount to shortchanging ‎ Mrs Buhari who ought to get a chance by May 29, 2015 to participate and even contest the office of president in July, 2015.

They averred that “the defendant/respondent’s ‎intention to hold an election on May 2015 is inimical to the progress and development of the country” as “not only shall we be affected as individuals, but the entire nation will also be affected as our position in the committee of African nations will be relegated.”

They further averred that “the other African nations who are members of the mission have unanimously agreed that the summit and the election be held in July.”

They urged the court to grant an order of interlocutotry injunction restraining the defendant/respondent from convening or hosting the said meeting for the purpose of the electing the president for the mission or from taking any step that will prejudice or foist on the applicants and the court a fait accompli pending the hearing of the suit.