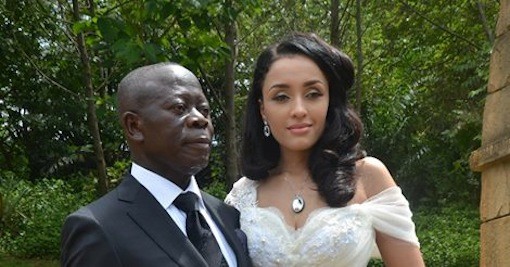 As soon as Governor Adams Oshiomhole stepped out with his wife, the social media was awash with all kind of rumours, most of which turned out to be completely false.

As is the practice, most online website pounced on this untrue information and peddled it in a bid to break the news. But following their wedding on Saturday, Oshiomhole cleared the air on a few things.

It was widely rummored that she is from the Philippines, Ethiopia or Holland but all three turned out to be false. According to her husband, she is from Cape Verde.

“I have seen a lot of publications, some saying that she is Philippine, Dutch and several others, but she is from Cape Verde. And that is part of West Africa. And I hope that will rest the debate of where she is from,” he said regarding her nationality.

But Oshiomhole was not done clearing the air on his wife. Today, at a thanksgiving service held at the Immaculate Conception Cathedral, Auchi he said: “When I read newspaper stories and they say that Comrade has married a ‘top model’ I’m like maybe it’s another person.

“The lady that God has directed to my path and heart to marry is not and was not a model. Of course, she looks beautiful and I understand that is why people assume that this kind of a lady must be a model but of course, she is a model in my heart and we hope and pray that we will be models in the heart of our God and I think that is the most important thing,” he said.

Thirdly, her name been widely spelt as Lara but again that also is not correct. Her name is Iara and not Lara. It starts with an I.