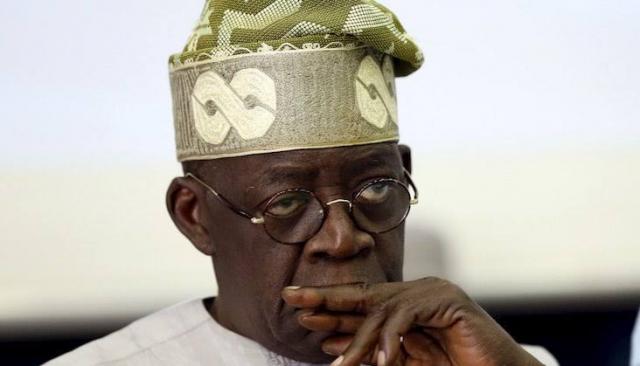 Young elements in the rulling All Progressives Congress (APC) have dealt a massive blow to the 2023 presidential ambition of one of the party’s national leader, Asiwaju Bola Ahmed Tinubu, with the successful hijack of the party structure from his control.

President Muhammadu Buhari had on Wednesday thrown his weight behind Victor Giadom as the acting chairman of the APC.He also expressed his readiness to attend the virtual meeting of the party’s National Executive Council meeting that Giadom announced that will hold at the Presidential Villa, Abuja on Thursday.

This development comes after some governors In the Progressive Governors Forum met with the Chief of Staff to the President, Prof. Gambari on Monday.
The Senior Special Assistant to the President on Media and Publicity, Garba Shehu while speaking in Abuja, said, “The President has received very convincing advice on the position of the law as far as the situation in the party is concerned and has determined that the law is on the side of Victor Giadom as Acting National Chairman.
“Because he will always act in accordance with the law, the President will be attending the virtual meeting Giadom called for tomorrow afternoon.
“We urge the media to stop promoting manufactured controversies and to not give any further room for mischievous interpretations of the law on this matter.
“In addition to the President, the Giadom meeting will, hopefully, be attended by our Governors and the leaders of the National Assembly.”
This development, Business Hallmark gathered, is a culmination of several high wire politicking and secret moves by forces in the party opposed to the Bola Tinubu-imposed national executive council.
With this development, it appears the president has dumped the suspended chairman of the party, Adams Oshiomhole, and the party’s National Working Committee.
Following Oshiomhole’s suspension, the party’s NWC had announced Senator Abiola Ajimobi as the acting chairman while Giadom also declared himself as the acting chairman.
APC governors and ministers have been in the ascendancy revently, while the Tinubu camp has been loosing out.
“Most of the governors in the progressive governors forum are against the Oshiomhole-led executive. While the unfolding drama plays to President Buhari and the cabal’s advantage as they are not also comfortable with Tinubu’s control of the party apparatus. It is all about 2023, and the young Turks, govs and ministers are winning the first round.
“Though Buhari is not keen on Tinubu succeeding him, he is not also finding it easy with the young elements in the party with the structure and financial muscle to prosecute the 2023 presidential election The governors are scheming for one of them to succeed the president come May 29, 2023”, a source in the Presidency confided in BH.
Our also crrespondent learnt that the anti-Tinubu faction is also made of serving ministers led by Rotimi Amaechi and Babatunde Fashola. Amaechi is the godfather of Giadom who has been recognized as the APC chairman. Tinubu’s man in Rivers. Magnus Abe, had last week lost the battle to install his man, Worgu Boms as Giadom’s replacement.
The plot against Tinubu, it was gathered, is playing out in state chapters of the party as well.

Meanwhile, former Minister of Aviation, Chief Femi Fani-Kayode, has insinuated thatTinubu has been retired from politics and thrown under the bus by Presiden Buhari.
Fani-Kayode said this while reacting to the decision of the president to recognise Victor Giadom as the acting chairman of the APC.
The former minister said the decision of the Court of Appeal to uphold the suspension of the National Chairman of the APC, Adams Oshiomhole, showed that it was all over for Tinubu.
“First, Oshiomhole was kicked out by the Court of Appeal. Then his preferred replacement, Abiola Ajimobi, falls into a coma. Then his archrival, Giadom is recognised by Buhari as acting national chairman.
“Conclusion: It is over for Tinubu. He has been thrown under the bus and retired from politics”, Fani-Kayode wrote on his Facebook wall,

We are not leaving Nigeria, Shoprite debunks exit rumour