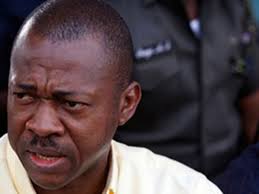 With less than one month to the end of this administration, Enugu state lawmakers and outgoing governor Sullivan Chime are on war-path over the refusal of the former to approve the latter’s N11 billion loan requests. There are fears that the situation might degenerate. MAURICE OKAFOR in Enugu reports

Barely one month to the end of the present administration in Enugu state, incumbent governor Sullivan Chime and the state House of Assembly led by Speaker Eugene Odoh are at daggers drawn over differing economic and political interests. However, the immediate cause of the face-off is the refusal of the lawmakers to approve the N11billion loan request from the governor weeks to the end of the administration.

The legislative arm of the state, more than it has done in the past seven years and ten months of Governor Chime’s administration has suddenly broken the much acclaimed ‘harmonious and mutual working relationship’ existing between it and the executive.

At the last count, the state legislators during its plenary of Thursday, April 23rd 2015, ordered the state Accountant General, Mr. Pascal Okolie, to be ready to furnish it with the total income and expenditure of the state government between January and March of this year. The Hallmark checks revealed that Mr. Okolie, the state Accountant General, as a measure to avoid being used as a tool through which the state legislators would get at governor Chime, shunned the invitation thrice on flimsy excuses until the legislators sought police order to compel him to answer to their clarion call.

Also penultimate week, the state legislators urged the department of Economic and Financial Crimes Commission, EFCC, to probe the Managing Director of Enugu state Universal Basic Education Board, ENSUBEB, Miss Chinwe Onuorah, over alleged financial impropriety reported against her by principal officers of the board.

The state legislators further urged the Universal Basic Education Board, UBEB, to stop further dealings with her on the capacity of ENSUBEB Managing Director until the allegations against her are cleared. The legislators went further to freeze the accounts of ENSUBEB at various commercial banks in the state.

Hallmark checks in Enugu state revealed that the state executive collaborates with some of the state based parastatals as a means of siphoning public funds. Therefore, the reason why the legislators are baying for the head of some of the executives of the parastatals, who obviously were appointed under the influence of the state governor and are seemingly governor Chime’s core loyalists.

The last straw that seemingly broke the camel’s back and opened the Pandora box was the absolute rejection of the state legislators of the bill to enable governor Chime’s administration to secure N11billion loan from a commercial bank, purportedly for completion of ongoing projects of the administration and payment of local  contractors.

Against expectations that the executive bill for the approval of the N11 billion loans would easily receive support and appendage of the House, it backfired.  The state legislators during their plenary session held on April 2nd, voted against the acceptance of governor Chime’s request.

The Hallmark gathered that 13 out of the 17 legislators present at the sitting vehemently opposed the request, only two voted in its support while two others were silent.

Hallmark recalled that before members of the state House of Assembly finally nailed the matter on April 2 sitting, the governorship candidate of the leading opposition party in Enugu state, APC, Barr Okey Ezea, staged a peaceful protest to the state House of Assembly with members of his party, where they urged the state legislators to reject the 11billion naira loan request, at the last days of Chime’s administration. He said it would amount to enslaving the incoming administration in the state to economic hardship and milking the resources of the state.

The Hallmark gathered from sources close to the government that the state chief executive felt very disappointed over the seeming betrayal by the state Assembly, where one of his supposed loyalists, Speaker Odoh, is in charge.

A tip of the ice berg that Mr Okolie, the state Accountant General will not likely appear before the state legislators, not minding the repeated requests from the House was intimated to members by Hon John  Bull Nwagu, representing Udi North Constituency, during April 14 plenary session of the House.

Hallmark gathered that Hon Nwagu, who hails from the same council area with Chime, was said to have intimated one of his colleagues sitting close to him that the expected allowances for the lawmakers would remain an illusion until the state legislators give appendage to Chime’s request for N11 billion naira loan.

Surprised by this revelation the lawmaker decided to let the cat out of the bag which caused rowdiness in the House and subsequent suspension of Nwagu from attending the plenary sessions of the House for the period.

The members of the Enugu state House of Assembly who have suddenly woken up from their reverie in their oversight functions have raised the alarm on the alleged plot by the state government to enter into a 25 year concession agreement with a private firm, A.G. Gold Trust for water supply to Enugu metropolis, without any law backing the project, and without the consent of the General Manager of the state water board.

The Enugu state legislators are embittered that there was neither a public bidding for the contract nor any advertisement in either the electronic or print media intimating the public of the plan to concession water supply in the state metropolis to a private company.

The lawmakers cautioned the private firm, A. G. Gold Trust to stay away from further negotiation with the state government on the matter because it is not in the best interest of the state.

Enugu legislators have also criticized the recent policies of encroachment and allotment of plots to individual on government preserved lands. The 18 lawmakers present during April 14 plenary session of the House condemned the allocation of plots of land to private individuals by the state government within the uncompleted international conference centre.

At same sitting, the state lawmakers took a swipe at the state executive over its recent steps in converting the premises of the old Eastern Nigeria Industrial centre, at Ziks avenue Enugu to private plots. They warned beneficiaries of the plots to stay clear out of it or have themselves to blame at long run.

Irked by the litany of vituperation emanating from the state House of Assembly in recent times, Barrister Chukwudi Achife, the chief press secretary to Chime said the outbursts have political connotations. That it was based on the fact that Governor Chime opposed Speaker Odoh’s ambition to succeed him as governor.

He also said that Odoh worked against the success and interest of the PDP in his council area during the elections but did not succeed.

But in a swift reaction, Mr. Lawrence Agbo, the press secretary to Speaker Odoh described Governor Chime’s press statement as personified.  Agbo stated that, “The publication is unfor­tunate and aimed at denigrat­ing the image and person of the Hon. Speaker of the Enugu House of Assembly, Eugene Odo and apparently mislead­ing the good people of Enugu State and the general public on the issues raised in the publi­cation.

“Whatever resolution the House has made that attracted the advertorial by the CPS to the governor was made in unison and collectively by the entire House of Assembly, it was not a speaker’s directive, it did not emanate from Mr. Speaker.”

Agbo said that despite a series of infractions, intimidation and blackmail directed at the speaker and members of the House, “the House for now has no plan to impeach the governor; but rather concerned with strengthening issues for the interest of the masses.”

Agbo identified the lawmakers’ refusal to approve the governor’s N11 billion loan requests as the source of the ongoing frictions between the executive and the legislative arms in the state.

Notably, Speaker Odoh House faced the biggest challenges to move against the state government when Governor Chime embarked on oversea medical trip where he spent more than three months in September 2012. There were pressures for Odoh to move for the installment of Mr. Sunday Onyebuchi, the impeached Enugu state deputy governor to become governor but Odoh insisted that Chime duly notified the state House of Assembly before he traveled.

In the second instance, the members of the Enugu state House of Assembly under Odoh, constitutionally invoked the suspension order and eventual impeachment of Mr. Onyebuchi over allegations of rearing commercial poultry within the government house.

Political pundits hold the view that Odoh’s led House of Assembly merely invoked the state rules against such practice, for the sole purpose of satisfying Governor Chime’s desire to do away with his perceived disloyal deputy.

On the other hand, Hallmark gathered from sources that it was out of Chime’s political magnanimity that Odoh has retained the Speaker stool of Enugu state House of Assembly for two consecutive terms.

Barely a month to the end of their administration, with the controversies there are fears that their present face-off might lead to something untoward, perhaps impeachment. But who will blink first is the question?