Home Politics Suleiman Abba: The politics of his removal 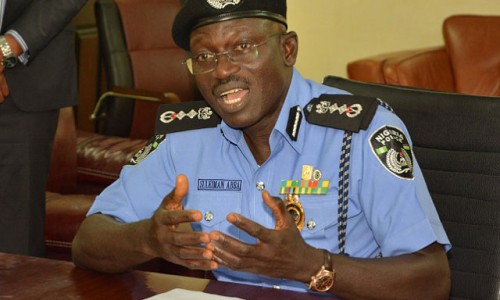 Since then, Nigerians have been asking what led to the sacking of the IGP who was alleged by many stakeholders to be among the most controversial police boss in the history of Nigeria.

The reason for the sacking though was not made public; there is however speculations that it may not be unconnected with the just concluded general elections which saw the incumbent President Jonathan defeated by the All Progressives Congress (APC) candidate, Gen. Muhammadu Buhari (retd).

Mr. Abba, who is in his 50s became acting Inspector General on August 1, 2014 following the retirement of his predecessor, Mohammed Abubakar, after 35 years of public service.

He was confirmed as the IGP on November 4, 2014. It would be recalled that Abba was a former Aide-De-Camp, ADC, to the wife of former military president, Maryam Abacha.

He enlisted in the Nigerian police as Cadet Inspector on December 31, 1984 and is actually due for retirement on March 22, 2019 and with his removal, Mr. Abba will proceed on forced retirement four years before he attains retirement age.

Not long after Mr. Abba became the IGP did he start to delve into judicial matters. On October 30th, the Speaker of the House of Representatives, Alhaji Aminu Tambuwal defected from the ruling PDP to the APC. Few hours later, the IGP announced in a statement the withdrawal of the Speaker’s security details citing provisions of Section 68 (1) (g) of the 1999 Constitution as amended.

The statement reads: “In view of the recent defection by the Right Hon.  Aminu Waziri Tanbuwal, CFR, the Speaker of the House of Representatives of the Federal Republic of Nigeria, from the Peoples
Democratic Party to the All Progressives Congress and having regard to the clear provision of section 68(1) (g) of the 1999 Constitution of the Federal Republic of Nigeria as amended, the Nigeria Police Force, has redeployed its personnel attached to his office.”

Many accused him of turning himself and the Police into a constitution interpreting institution abandoning its primary responsibility of protecting lives and properties.

Barely a month after Tambuwal’s defection to the APC, Suleiman Abba was once more accused of acting to a script on November 20, 2014. That date would linger in the minds of many Nigerians for a long time. It was the day no one would have envisaged the kind of drama that unfolded at the National Assembly. Men of the Nigeria police force thronged the premises of the National Assembly blocking the three gates leading to both the upper chamber and lower chamber.

According to reports, Tambuwal introduced himself to the policemen but they did not respond and as a result of that all hell broke loose.

There was commotion like never before in the House as members scaled fence to enter the chambers whereas the PDP lawmakers were allowed in and already seated to move for the impeachment of the Speaker.

Members of the main opposition party, the APC alleged that the plot was to impeach Tambuwal. There were reports that members of the PDP were seated in the House while the fighting was going on outside.

A reporter said “I have been a Correspondent at the National Assembly since 1999 and I have never seen this kind of thing. This is the first time.” She said while reacting to the tear gas that was released to ward off the House of Reps members.

Japsper Azatualam, a member of APC Presidential council told Hallmark that “the action is clearly that of the President and not the IGP. The IGP was only dancing to the tune of his boss. The President is becoming too desperate to hold on to power and his actions of recent don’t augur well for our fragile democracy.”

Ordinary Nigerians also reacted to the shameful event at the lower chamber of the National Assembly.

According to Salifu Abubakar, “It is time to start the search for a new IGP because Mr. Suleiman Abba acting IGP has become interested and merged his office with the PDP. I will not be surprised if he is alleged to have stuffed and actually snatched ballot boxes come 2015 general elections in favour of his PDP.”

“The IGP is ignorant of the police functions. It is only the judiciary that has the power to interpret the law and not the police. The IGP should stop eye service and realize that his position is temporary” said another concerned citizen.

Many have alleged that the IGP’s removal was as a result of his disloyalty. There were reports that Abba did not comply with some instructions given to him by the Presidency during the general elections. To make matters worse, he was accused of romancing with the President-elect, Buhari in his reappointment bid. He was also accused of receiving Buhari at the airport on different occasions. His presence at the INEC collation centre where Buhari collected his certificate of return was also said to have angered the Presidency.

Most political observers are of the view that Abba’s promotion to the rank of IGP was to serve the selfish purpose of the President.

According to a member of the PDP from the North who pleaded for anonymity, “When President Jonathan bypassed other senior officers to appoint Abba, it was done in the understanding that a sense of gratitude would obligate the lucky chap to pay back. Both Jonathan and Abba knew the favor put Abba in debt. Abba was supposed to do everything he could to make sure the man who appointed him wins his re-election bid. Abba did not do anything substantial to influence the outcome of the process. This is why President Jonathan felt bitter.”

Speaking with Hallmark, social activist and political commentator, Sandra Ekpenyong said, “There is no question that the IGP was out of control. He was used to lock out members of Congress not too long ago.

The lessons are many in what has happened to him. There is a day you will surely pay for your bad choices. Your fair weather friends will desert you. You will be lucky if you have a career afterward. You will go from being important to becoming insignificant. You will learn that it doesn’t pay to lack integrity, she said.

However, the outspoken Kayode Ogundamisi didn’t spare the ousted Police boss as he said, “The ex -IGP Suleiman Abba deserves the embarrassment meted on him. Abba violated the Nigerian constitution over and over again and misused his power by withdrawing security details attached to the Speaker of the House of Representatives. Now with four more years to his retirement he has been dumped for Arase who is due to retire next year”.

He further stated that, “I hope those who serve leaders rather than country will learn from the misadventure of Suleiman Abba. Good riddance to a bad cop.”

However the former IGP, attributed his sudden removal from office as the will of God, and begged for forgiveness from anyone he may have offended in the line of duty.

The former IGP, who said this while handing over to the new Acting IGP, Mr. Arase, at the Force Headquarters in Abuja, said, “For those who felt deeply offended, find a place in your heart to forgive me it is God that judges”.

Already there are arguments on whether the new President would retain the Acting IGP, Arase or not.

Stakeholders think Jonathan over reacted by appointing a new IGP for the incoming administration that might not be willing to retain him.