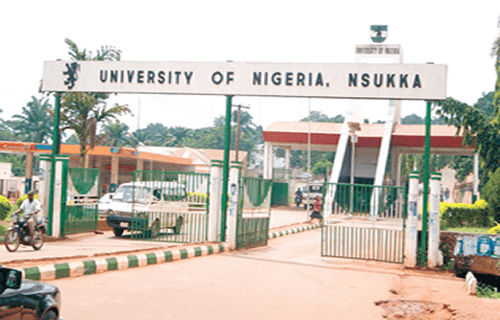 “To restore the dignity of man,” the age long motto of the University of Nigeria, Nsukka loudly proclaims. Without a doubt, it is a school that has restored the dignity of many a man. Her products include some of the greatest achievers in various professional and political fields in the country, even beyond. It is a university where men are called “Lions” and women “Lionesses.”  Her graduates are, too, addressed as “Super Lions” and Super Lionesses.” But that was before. Things have changed for the worse in the university. Right at the home of these lions presently are rodents of many kinds, derelict buildings, heaps of dirt and men who daily risk an epidemic.

Franco – the home of men – is pile rubbish; a place where men are immediately stripped of dignity, and they begin to live the life of misery.

It is, for want of better words, a place not good enough for men; any man at all, and certainly not those seeking the restoration of their dignity.

At Franco, it immediately strikes you that the idea of restoring the dignity of men in a once prestigious institution has become a big irony. It has been so for many years!

During the golden days of the university, Franco was the place men lived with pride and dignity. It was a refectory where students were entitled to three square meals a day. It was because of this Franco Refectory that the entire male hostel assumed the name Franco. Presently, the original Franco Refectory is a shadow of whatever it may have been in the past, and so are the entire male hostels.

At the entrance of Franco – which houses Mbanefo, Alvan Ikoku and Eni  Njoku hostels for male students, as well as Kwame Nkrumah and the more recently built Odili hostels for female and Post Graduate students respectively – you are first welcomed by a stench oozing from gutters on both sides of the road.

They are perpetually flowing with some of the dirtiest liquids the eyes have ever seen… even in the middle of the dry season with its intense harmattan wind in Nsukka. Then, a pile of junk that you could guess may have accumulated for several months. It is an eyesore.

Each of the hostels has about 400 rooms; about 100 in each of the four series. Officially, a room is allotted to six students, but there are often squatters. Thus, in each, there are usually between 10 and 11 students.

Inside the hostels, the rooms are unkempt, the tables largely destroyed and convenience absolutely pitiable. It was originally designed in such a way that you squatted on top to defecate. It was meant to be flushed, but only a minute percentage of students did flush. The whole toilet was often littered with faeces, such that new visitors had to cover the already existing pile with a spread of newspaper before unloading their own. It took little time for the newspaper to get filled up and there would be a need for a new one.

In the end of the day, there would be heaps of faeces separated into layers by newspapers, leaving the cleaners to swim in it every morning.

Using the restroom here is an exercise undertaken by the brave. Those who were less endowed opt for “shot put”- the act of “pooing” into a nylon bag and tossing it into the bush. Yet, others went for what is known as bush attack; in fact most, people prefer visiting nearby bushes early mornings and late evenings.

Around 2010, however, there was a sign of hope – renovation commenced. The toilets were changed to the more modern water system. It was supposed to be a new beginning. But that new beginning only brought change in the toilet systems, not in the attitude of the students. Like old times, there was no flushing and the entire environment soon returned to the original state.

When it comes to this practice of not flushing the toilets however, there is indeed enough blame to go round. You could say it is due to poor attitude of the students and you will be right. Indeed, it is unthinkable that university students would use toilets and fail to flush… this, it must be said, is not peculiar to UNN as anyone who passed through any Nigerian university can attest to. Yet, there is the point to be made about insufficient water supply.

In the entire Franco where there are thousands of students, only about four taps are available, one in each of the regular student’s hostels. As a result, students often have to queue up for several minutes and hours to fetch water in the morning. Those who have morning lectures often cannot afford such luxury of time.

Yet, on some occasions, the taps are out of water and the students would have to climb the two available reservoirs which of course soon runs out, and their fate would depend on tanker drivers who sometimes brought water to some of the few tanks. In summary, water is often a huge challenge and the blame for this can only go to the authorities.

But water is not the only challenge and things have gotten much worse. A few years ago, students had dirty environment – which really is partly their own making – insufficient water supply and inadequate hostel facilities such as beds and cupboards to complain about. Now it is all that and more.

For the past several months, there has been no electricity supply at Franco. The appliances were vandalised about two years ago, and ever since there has been little or no effort to fix them. The environment has become a lot dirtier, and worst of all, the buildings are falling apart.

Walking through Alvan Ikoku Hall, it is all too obvious that it is no longer suitable for human habitation. Walls show signs of cracks, pillars are breaking down and everywhere is oozing with foul smell. It is an old custom of students to throw water; all manner of dirty water from the corridors. It is in part, why the environment is dirty.

The Alvan situation is not peculiar to it. It is the same thing with Eni Njoku and to a lesser degree, Kwame Nkrumah. It is much worse with Mbanefo. For more than two years, the hostel has been abandoned; it is decaying in practical terms. About three years ago, students vacated the hostel, ostensibly for renovation work. But ever since, it has been under lock and key. No renovation work is going on and no sign that there would be any anytime soon.

It has been months without electricity; which also means fewer days of water availability, and the students say life in the hostel has never been more difficult.

“The toilets are still very bad, people don’t flush; it’s a mess” said a student who gave his name as Chikezie. “For months now there hasn’t been power here. You can see everywhere is untidy.”

Asked whether he sometimes fear an outbreak of an epidemic, Chikezie noted: “Apparently, the danger is there. But there is the stress of lectures and exams to worry about.”

Efforts to get the Dean of Student Affairs Department, who is responsible providing accommodation for students, Prof Sabinus Ofoefula for comments did not yield positive result, but Mr. Attah Godwin, the man in charge of Alvan Hall as the supervisor attributed the state of affairs to lack of funds and neglect by previous authorities, and said the new Dean, Prof Ofoefula has been making serious efforts to change the situation.

“There is lack of funds,” he said. “Again, the previous deans neglected this area and paid more attention to the female hostel. But the new dean has been trying to see that male hostels are at least equal to female hostels.  With the new dean, there is already a change of attitude towards Franco.”

Female hostels which are located up school, a distance from the male hostels cannot be said to be very well managed either, but they are a lot better and if the new dean can bring the derelict Franco hostels to their levels, it would be a massive feat, but there is little sign that this will happen soon, or even later at the moment despite Mr. Attah’s claims.