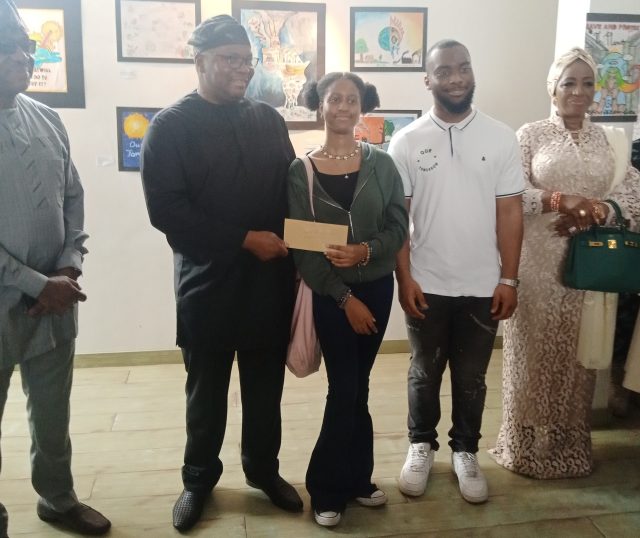 Relevant stakeholders on Thursday, gathered at the Didi Museum, Victoria Island, Lagos for the Climate Change Art Exhibition organised by Our Tomorrow, a pollution and climate change NGO, with the verdict that more urgent steps need to taken to save the planet from threat of climate change.

The exhibition, aimed at creating awareness among the younger generation about the dangers of climate change, saw presentations of brilliant artwork by students of various public and private secondary schools in Lagos, depicting the threat of carbon emissions, and proffering solutions.

Speaking at the event, Prince Emeka-Obasi Jnr, founder of the NGO noted that the idea was to create awareness among younger generation about the danger climate change poses to the society, so that they would begin early to adopt behavioral changes, and add their voices to the demand for governments to take more action.

“We decided to launch this initiative because we are aware of the dangers climate change poses to our environment. The idea is to create awareness, especially among the young people because it’s important that we begin to address this problem,” he said.

“Of course, if climate change is not tackled, it is going to significantly affect the quality lives that we live. We are going to see more floods, more droughts, conflicts and so on. So, it is important that governments across the world speed up effort to tackle these issues.

“On our part, we’ve been trying to create awareness; to bring attention to these issues with a view to compelling action. We believe that as more young people join their voices, more can be achieved in this regard.

“We’ve also done on the spot assessment of areas that are most impacted. Earlier this year, we visited Ogoni land in Rivers State. We’ve also seen how desertification is encroaching in the north. Here in Lagos, rising sea levels present serious threat. We see increased rate of flooding. So, there is need to act more swiftly.”

In his remarks, Gbenga Omotosho, the Lagos State commissioner for information noted, “This event is another way of reminding us that climate change is real, and from the exhibitions, it is heartwarming to know that even kids understand what we are talking about; how endangered our planet is.

“As I always say, the greatest legacy that we can leave for our children and the generations unborn is an earth that is natural, beautiful and able to support life. This is why all of us must understand that climate change is real and begin to do something about it.

“The fact that this is coming from young people is very encouraging. The creativity portrayed in these exhibitions is remarkable. It shows that the children understand what the issues are about, and what we should do to tackle it. We should encourage them so that collectively, we can tackle climate change.

“Fighting climate change is not all about the government; it is our collective responsibility. We have to fight it together, and that’s what we are seeing here today.

“As a government, we’re doing a lot in terms of monitoring the environment. We have agency called Lagos State Environmental Protection Agency (LASEPA) that goes around to monitor smoke and noise emissions, and many other things that affect the environment. And of course, we have Lagos State Parks and Gardens Agency, an agency that plants trees. It has a target to plant millions of trees and they are doing it every year.”

He said the art works are the students’ own expressions of how they understand climate change.

“These students have used their art works to illustrate the dangers of climate change on the environment,” he said.

“I’m impressed with the artwork being exhibited here. My takeaway from this is that children know about these issues of climate that we ordinarily assume. And I thank the organisers for this initiative. You can see the ingenuity being expressed through these works of art. They have creativity highlighted the dangers of climate change and and proffered solutions. This is wonderful and we are encouraged by it.

“You are aware that Lagos State, because of it’s topography, is threatened by rising sea levels. But as a government, we have continued to take necessary measures to mitigate the threats and to combat climate change. In the ministry, one thing we insist on is that every project being executed in the state conforms to our environmental impact assessment.

“Environment is one of the priority areas of the Governor Babajide Sanwo-Olu administration. He has committed a lot of resources to building drainages and other supporting infrastructure, and the effort is bearing fruits.”