The General Overseer of Christ the King Rescue Global Ministry, Agbado, Ogun State, Prophet Gabriel Onaolapo, has announced plans to celebrate the 30th anniversary of his call to the ministry, and 20th anniversary of the founding of his church on Sunday, March 28.

Prophet Onaolapo said the event which is billed to kick off with a church service to be officiated by Pastor Stephen Olusola Aluko, director, Sunday School of Christ Apostolic Church worldwide, is to appreciate God for His mercies through the years, including saving him from a near death experience.

Onaolapo who spoke in an interview with our correspondent, recalled how he began his journey into God’s vineyard, with only 16 people attending his church, out of which nine were from his household.

The Ogun based man of God who is noted for his prophetic abilities, said although he is not where he planned to be 30 years into his call to God’s service, but he has always used the words of former United States president, Abraham Lincoln as guide, noting that God has nurtured the church to point where it now has many members, with branches in Nigeria and overseas.

“We are going to celebrate because I teach optimism; I teach gratitude, I want people to always appreciate God. Yes, I’m not where I planned to be at this stage, but I also like to remember the words of Abraham Lincoln. He said though we may not be where we ought to be, but we are not where we used to be,” he said. 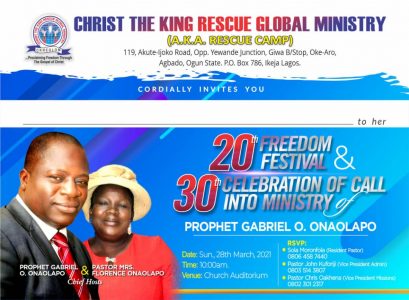 “The journey may be slow, but the important thing is that you are making progress. So, I sat down and said, I have come a long way in the ministry. By the grace of God, we have been able to win souls for Christ. Besides having branches of the church in Nigeria and overseas, we have been able to author many books. God also gave me a good wife and four wonderful children.”

Onaolapo who said he will use the occasion to also launch his books, some of which include “Gang of Bad Boys in the Gospel Ministry,” “Levite’s Streams of Income,” “Hazards in Gospel Ministry,” Motherhood,” “Deposit of Diamond,” among others, emphasized that Sunday will be a day to celebrate God’s goodness in his life and the life of His people.

“When we started this church, we started with 16 members, out of which nine are from my own household. My wife, my sister, my two children, my cousins, sister-in-law and so on. There were only seven new faces that came. So, if a church that started with only 16 members with broken blocks serving as seats, but God has brought us this far today, it calls for celebration,” he said.

“If God has been this gracious to be, and spared even a near death experience these 30 years of my call to the ministry and 20 years of founding of the Rescue Camp, it calls for celebration. I announced to the church that I wanted to kill 10 cows, and I tell you today, I already have money for the 10 cows. We already have close to 20 bags of rice.

“So, come this Sunday, it will be a day to celebrate God’s goodness and faithfulness in my life and the life of His people. The service will be starting by 10am, and the guest minister is non other than my father, the man who was instrumental to my coming to Lagos, Pastor Stephen Olusola Aluko, the director, Sunday School of Christ Apostolic Church worldwide.”