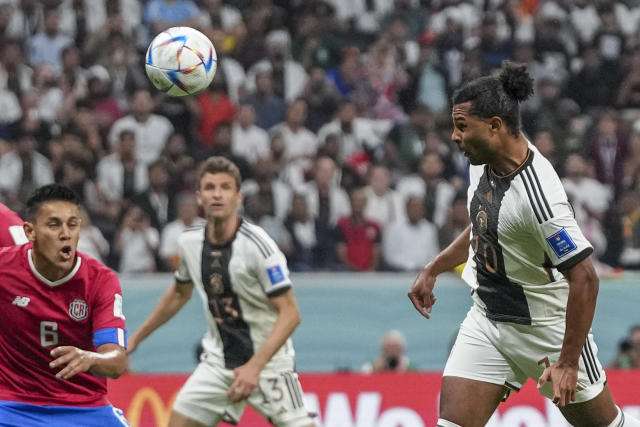 Germany and Belgium’s hopes of sealing a round of 16 ticket at the ongoing FIFA World Cup in Qatar vanished on Thursday with the two European top sides finishing third in their respective groups with four points.

Germany’s 4-2 victory over Costa Rica wasn’t enough to advance to the round of 16 as Japan beat Spain 2-1 to top the group.

Germany were in complete control and in front through Serge Gnabry’s 10th-minute header only for Costa Rica to turn the match on its head to raise the remarkable possibility of Spain also going out.

It would have capped one of the most astonishing nights in World Cup history, but Germany substitute Kai Havertz restored a measure of normality to proceedings with two clinical finishes to extinguish Costa Rica’s hopes of springing a major shock.

Substitute Niclas Fullkrug added a last-minute fourth to confirm victory, but it will be of no consolation as Germany failed to reach the knockout stage of the tournament for the second time in succession.

Japan and Spain have qualified for the last 16 of the World Cup as Group E winners after a shock 2-1 win over Spain.

Alvaro Morata’s header gave La Roja the lead in the first half, but two quickfire goals from Ritsu Doan and Ao Tanaka after the break were enough for Hajime Moriyasu’s side to seal Japan’s place in the knockout stages.

Meanwhile, Belgium’s golden generation as ended with with nothing to show as a goalless draw against Croatia in group F ensured that the number two ranked team also crashed out of the tournament on Thursday, managing only four points from three games.

Belgium had a lucky escape in the first half after a penalty decision was later overturned by the referee after consultations with VAR.

Romelu Lukaku, who came on in the second half, could have won it for the Belgians but was guilty of unpardonable misses.

Lukaku had the chance to put Belgium ahead after Yannick Carrasco’s effort was blocked, but the Inter striker saw his shot hit the post.

He was presented with another opportunity off a cross with an open net in front of him but chested the ball back to the recovering Croatian keeper.

Again he missed what would have been the opener as he failed to divert a cross towards goal from close range.

The last time Belgium failed to make it out of the group stage was at France 1998 World Cup.

And at the end of the group games, Morocco finished on seven points, Croatia on five, Belgium got four while Canada did not get any point.

This is the first time the North Africans have qualified for the round of 16 since Mexico 1986.

First half goals from Hakim Ziyech and Youssef En-Nesyri gave Morocco a deserved 2-0 lead before an own goal by Nayef Aguerd reduced the deficit.

Morocco took the lead in the 4th minute through Ziyech who lopped the Canadian keeper after the North American shot stopper’s poor clearance.

In the 23rd minute En-Nesyri doubled Morocco’s lead after he ran on to a long pass from Achraf Hakimi and volleyed past the Canadian keeper.

With five minutes left Canada pulled a goal back thanks to an own goal by Aguerd who diverted Sam Adekugbe’s low cross from the left past his keeper and into the net.

In first half stoppage time En-Nesyri had the ball in the back of the net off a set piece by Ziyech but the goal was chalked off for offside.

The Canadians threw everything in the second half but could not break down a resolute Moroccan side who held on to advance.