Nigeria’s main opposition party, the People’s Democratic Party (PDP), has dismissed as falsehood, achievements listed by the President Muhammadu Buhari government as its accomplishments in 2021.

The Minister of Information and Culture, Lai Mohammed had on Thursday, listed 100 achievements of the Buhari administration in 2021.

But reacting to the list, the PDP in statement on Thursday night by its National Publicity Secretary, Debo Ologunagba, titled ‘FG’s 2021 performance claims, a litany of lies- PDP’, dismissed it as a celebration of falsehood.

According to the PDP, “The Performance claim by the APC government can only be a product of delusions of grandeur; a joke of the year, as the word on the street where the real Nigerians are is completely at variance with the fabricated lies and imaginary performance indices contained in the report.”

The Party claimed that the APC, instead of facing its failures to secure the nation, has continued to harbour “a self-confessed terrorism apologist, is celebrating the mass killings currently going on in our country by engaging in self-praise in the face of failure while terrorists continue to ravage our nation.

“On the economy, the APC government had become so addicted to the falsehood that it had forgotten that Nigerians are aware that the PDP government handed over a $550 billion economy (largest in Africa and 26th globally) and a diversified economy to the APC in 2015.

“Today, our nation has become the poverty capital of the world due to the mismanagement, corruption and recklessness of the APC government.”

The PDP noted that Nigeria’s external debt in 2015 was $7.3bn. Under the APC government, the external debt has reached over $38bn and counting, with no corresponding investment in the economy or infrastructure.

It said, “Today, the poverty rate in Nigeria is 71 per cent as against 32 per cent when the APC government took over in 2015. Between January and September 2021, over $1.8bn was expended on debt services, yet the APC government claims to have performed in 2021.

“It is self-evident that only the APC can claim to have performed in the face of life discounting experiences of the ordinary Nigerians. The APC government has nothing to say to the fact that under its watch, the naira has collapsed from N198 to a dollar handed over to it in 2015 to over N500 today; that the pump price of fuel has risen from N87 per litre in 2015 to N165 per litre today; that unemployment has risen from 7.3 per cent in 2015 to over 33 per cent today and that price of food items have so skyrocketed that millions of Nigerian families are no longer able to afford their daily meals and other necessities of life.”

The PDP also accused the regime of the President, Major General Muhammadu Buhari (retd.), of being a haven of compromised and corrupt politicians, saying that it has no answer to reports of how its leaders and their cronies stole over N25tn from various government agencies.

“It also explains why the APC government has failed to prosecute its officials and APC leaders openly indicted for corruption,” it added.

On infrastructure, the opposition party alleged that the APC-led government listed projects that exist only on paper as achievements and attempted to appropriate projects by PDP administrations.

It, therefore, challenged the APC government to name one landmark project it conceptualised, commenced and completed in the last six years.

It further said the APC is oblivious of the pains and tears that its leadership has “inflicted on Nigerians.” 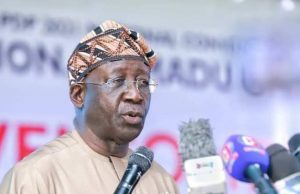