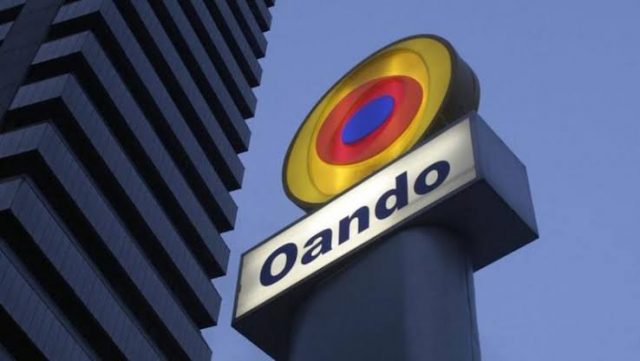 •Wale Tinubu, board poised for a fight

The crisis in Oando Plc, the giant oil company rose to a crescendo last Friday May 31, 2019 when the Securities and Exchange Commission (SEC) finally released the Sword of Damocles and barred the CEO of Oando Plc, Mr. Wale Tinubu, from holding the position of director in a public company for the next five years.
SEC equally sanctioned the company’s deputy CEO, even as it directed other board members found culpable of infractions to resign. The apex regulator also ordered an extraordinary general meeting of the company before July 1 to appoint new directors.
As the issue continues to dominate discussions on Marina and Broad streets in Lagos, keen observers say that SEC’s removal of the directors of the company was long overdue given the long-reported excesses of Oando’s board.
The crisis which engulfed the oil giant has lingered for some time, almost hampering the focus of its management. However, SEC has hinged its bold decision on the outcome of the investigations of the activities of Oando after a forensic audit carried out by Deloitte & Tations revealed that the company committed a number of serious infractions ranging from false disclosures to market abuses, manipulation of financial statements and internal control failures. Hence, the shocking statement last Friday announcing the easing out of Oando’s directors which was made to the capital market community.
“Following the receipt of two petitions by the Commission in 2017, investigations were conducted into the activities of OandoPlc (a company listed on the Nigerian and Johannesburg Stock Exchanges),” SEC’s statement had said.
“Certain infractions of Securities and other relevant laws were observed. The Commission further engaged Deloitte &Touche to conduct a Forensic Audit of the activities of Oando Plc.
“The general public is hereby notified of the conclusion of the investigations of Oando Plc. The findings from the report revealed serious infractions such as false disclosures, market abuses, misstatements in financial statements, internal control failures, and corporate governance lapses stemming from poor board oversight, irregular approval of directors’ remuneration, unjustified disbursements to directors and management of the company, related party transactions not conducted at arm’s length, amongst others.”
Reacting to the SEC’s investigations and the recommendation requesting the resignation of its board including the company’s chief executive officer, Mr. Wale Tinubu, OandoPlc in a press statement late Friday night said the alleged infractions leveled against it were unsubstantiated, and as such, the recommendations/penalties were pointless.
The company accused SEC of not giving it the opportunity to review and respond to the supposed findings from the forensic audit that was conducted. As such, the company said it cannot ascertain the authenticity of the findings; if at all there were any. Therefore, Oando Plc believes that the entire drama is a ploy designed to malign its business.
The statement went further to disclose the company’s intention to take all necessary legal action towards protecting its business and shareholders’ interests.
Controversy had started when major shareholders Ansbury and Manga petitioned SEC, alleging gross abuse of corporate governance standards and financial reckless fiscal management. They had subsequently called for the removal of the management of the company and removal of all board members.

Manga, BH investigation reveals, owns about 17.9 per cent share of the company, and had expressed discomfort over the management’s handling of the Conoco Phillips transaction.
Ansbury, had accused the management of the company of lack of capacity, efficiency and effectiveness in the running of the firm, believing that Oando’s future was uncertain as a result.
“Strong uncertainty regarding the going concern of the group (Oando) had already arisen in 2015 and strengthened in 2016 as pointed out by the auditors in their report.” Anbusry had petitioned
“In the previous financial statement, the management had proceeded to liquidate part of the assets of the company and many are going to be liquidated, and in particular, under the notes to the account, management intends to sell its participation in OER (the last asset attributable to the company) in the name of restructuring or re-establishing the group’s going concern.” Ansbury added.
The auditor to OandoPlc, Ernst & Young had also faulted some aspect of the 2016 financial statement of the company, even as shareholders expressed mixed feelings on the company’s performance.
According to the auditors, “We are drawing attention to note 45 in the financial statements, which indicates that the company reported a comprehensive loss for the year of N33.9 billion ( 2015: loss N56.6 billion) and as at that date, it’s current assets exceeded current liabilities by N14.6 billion (2015: N32.8 billion net current liability). The group recorded a comprehensive income of N112.4 billion for the year ended December 31, 2016 (2015: loss N37.8 billion) and as at that date, it’s current liability exceeded current assets by N263.8 billion (2015: N260.4 billion). As stated in the notes, these conditions, along with other matters, indicate that a material uncertainty exist that may cast significant doubt on the company (and Group’s) ability to continue as a going concern.”
The crisis had resulted to Oando being forced to cough out a whopping $680 million (N244.8bn) to pay Ansbury Investments, which is owned by Mr. Gabriele Volpi.
According to the story, The London Court of International Arbitration (LCIA) ordered two companies owned by the Chief Executive Officer of OandoPlc, Mr. Wale Tinubu and his deputy, Mr. MofeBoyo, to pay US$680 million (N244.8 billion) to Ansbury Investments.
The ruling of July 6, 2018 by the LCIA held that Ocean and Oil Development Partners (OODP), British Virgin Islands, which owns 55.96 per cent of OandoPlc through a holding company, Ocean and Oil Development Partners (OODP) Nigeria Limited, is owing Ansbury Investments Incorporated US$600 million (N216 billion).
Ansbury Investment counsel, Mr. Andrea Moja who confirmed the LCIA award in a statement to the media said the Arbitration Court also held that Whitmore Asset Management Limited, whose ultimate beneficial owners are Tinubu and Boyo, was also owing Ansbury Investment US$80 million (N28.8 billion).
With these, the cumulative debt owed by the Oando chief executives to Ansbury Investment totals US$680 million and the development had elicited debate in many corporate offices, while most of the discussions in Marina and Broad streets at the moment also are centered on how the deals affect shareholders of Oando.
The management of Oando had invited Ansbury and Manga to take part in funding the acquisition of ConocoPhillips which market observers believe was what did the company in.
The debate that ensued hinged on whether the statement that awarded the huge sum to Ansbury only concerns Mr. Wale Tinubu and OmamofeBoyo who are top executives in the company. But analysts believed that Oando could possibly not be affected if the top executives could pay the whopping sum without recourse to the oil giant. Nevertheless, the caveat is how and where these executives who own about 60 per cent of Oando can raise $244.8billion to offset their debt.
It is not only SEC that is baring its fangs on the Oando chiefs as shareholders had over time, kicked for the removal of the board of Oando, especially the CEO, Mr. Wale Tinubu who has been on the saddle of leadership for about 20 years.
A shareholder of the company, Mr. Okezie Boniface, told BH that the action of SEC was commendable though a little late.
’’ I know that the board of Oando will challenge that action. However, SEC should also go ahead to put in place term limits for the top executives of quoted companies to guide against the fate of Oando in other organizations,’’ He said.
A senior stock broker who would not want his name mentioned in print said that dealing members have also not been happy with the activities of the company. He said the company has been overtrading in the sense that it has been to the market several times to raise money through public offerings without giving adequate account of the funds raised. He added that Wale Tinubu is suspected to be diverting the funds he gets from the market to personal uses. However, this charge could not be corroborated by BH.
Efforts to get reactions from SEC Spokesperson, Efe Ebelo on the subject were yet to bear fruit at the time of going to press.