NNPC in its monthly presentation to the Federation Account Allocation Committee (FAAC) meeting on Wednesday, April 27, said that it deducted N245.77 billion for petrol under-recovery costs in March.

In the first quarter of 2022, the data showed that petrol subsidy payments totalled N675.93 billion.

According to the document, NNPC said it would also deduct N671.88 billion (under-recovery outstandings) from its remittance to FAAC for April — due to the federation in May.

Under-recovery or subsidy is the underpriced sales of premium motor spirit (PMS), better known as petrol.

According to the document, the national oil company declared zero remittance to the federation account — the third time in 2022.

Further checks by Thecable showed that, for the month of March, the gross domestic crude oil and gas revenue was 259.54 billion.

Payments for subsidies have continued to dwindle remittances accrued to the federation account. In February, the federal government postponed the planned petrol subsidy removal, citing “high inflation and economic hardship”.

It, however, asked the national assembly to approve N4 trillion to cater for costly petrol subsidy in 2022 — as a result of high global oil prices due to the Russia-Ukraine war. 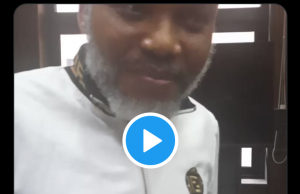