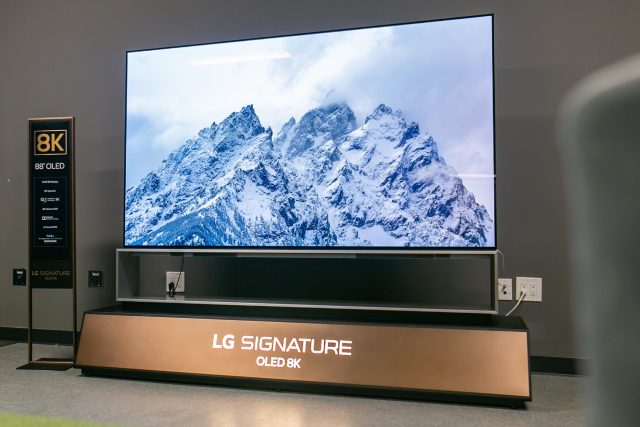 LG has distinguished itself by earning the highest scores in the UHD TV performance Test. LG’s premium TVs (over USD2, 600) and mid-range TVs (between USD 840 – 1,700) received full marks and five – star ratings. Competing brands could not equal LG’s results due to the viewing angle performance of its premium TVs and the picture quality of its mid-range TVs.
The result of performance tests which was conducted by the Korea Consumer Agency (KCA) has attracted considerable attention from stakeholders and TV industry experts. The head of the KCA’s department of Testing & Inspection, Yang Jong-chul announced the results of the organization’s UHD TV comparison at the FTC’s headquarters in the Sejong government complex after the brands filed a lawsuit with the Korean Fair Trade Commission (FTC) over each other’s products (LG OLED TV and Samsung Q-LED TV).
The test results proved favourable for LG. KCA evaluated 55-inch UHD TVs (including OLED and Q-LED models) from four different brands, assessing a range of performance metrics such as picture quality, audio quality, input lag, yearly power consumption , reliability , power-on time, safety and the ability to receive / display terrestrial UHD broadcasts.
KCA tested the most expensive and the cheapest 55-inch TVs available, selecting the models that have proved most popular with local consumers in both categories. The products were LG OLED TV 55E9 (premium) and 55B9 (mid-range), Samsung QN55Q80R (premium) and 55Q60R (mid-range), Anam Electronics’ model UQ550YT, and Philips OLED TV (55OLED873/61)
LG OLEDC9TV which comes in 77”, 65” and 55” appears to be in similar premium category with LG OLED TV 55E9 which received full marks across all evaluation criteria, including picture quality, audio and input lag conducted by KCA.
The LG C9 OLED offers an unparalleled blend of superb media performance, rich features and forward-looking technologies. It’s the best TV we’ve seen, and have been one of the best TV overall since its launch.
The main attraction of the LG OLED 4K TV – C9 is its OLED screen. These have become the stuff of legend in the AV world, with their contrast and viewing angle advantages helping them find their way into the homes of a huge number of serious AV fans, despite them typically costing way more than most LCD TVs. Sharpness and detail levels have been stepped up – especially when the TV is up converting sub-4K sources to its native 4K screen, and there’s better motion handling.
The TV comes with a new second generation α9 Processor with Artificial Intelligence, advanced voice control, perfect colour on perfect black, Dolby Vision & Atmos Cinema Experience at home, 4K Cinema HDR Delivering the filmmaker’s vision and minimalistic design blends in to any space. The new processor also impacts sound quality, thanks to LG’s latest AI Sound system. This optimises all types of incoming sound to match the precise capabilities of the set’s speakers.
The TV is also G-SYNC Compatible, the critically-acclaimed LG OLED TVs will deliver the smoothest, most immersive gaming experience without the flicker, tearing or stuttering common to most displays. Gamers have long valued LG OLED TVs for their exceptional picture quality, low input lag and ultra-fast response time. The addition of G-SYNC Compatible support allows gamers with GeForce RTX 20-Series or GTX 16-Series GPUs to fully enjoy extreme responsiveness and optimized visuals on LG’s large OLED TVs from 55 inches up to an immersive 77 inches. The addition of NVIDIA G-SYNC Compatibility raises the bar once more, guaranteeing even more immersive big-screen PC gaming on the company’s industry-leading 4KOLED models, available in 55 to 77 inch screen sizes. G-Sync and other VRR technologies help eliminate flicker, tearing or stuttering on displays when used to play games that are built using VRR.
LG OLED C9 series are available in stores nationwide in Nigeria. The brand continues to be the front line of OLED TV technology considering the level of commitment and investment the company has made over the last decade. It’s superiority in picture quality, viewing angle and aesthetics remains an envious progress.