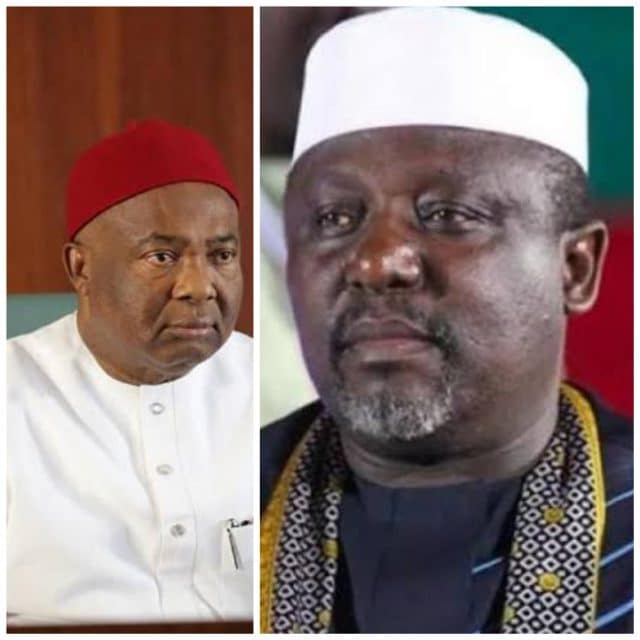 Former Imo State governor, Owelle Rochas Okorocha has lambasted the incumbent governor of the state, Senator Hope Uzodinma, accusing him of sponsoring dirty attacks against him, as the war of words between the duo continues to escalate.

Okorocha, who is currently the senator representing Imo West Senatorial District, in a statement by his special adviser on media, Sam Onwuemeodo accused Uzodinma of being behind a recent statement by the youth wing of Ohanaeze Ndigbo to the effect that he was not fit to be Nigeria’s president.

National Publicity Secretary of the Ohanaeze Youth wing, Osmond Nkeoma, had stated in Owerri at the weekend that Okorocha did not record any achievement while in office as a governor to justify his rating and adoption as a presidential aspirant or candidate by Ohanaeze.

Nkeoma posited that the 2023 presidency was a serious project to Ohanaeze and Ndigbo and should never be toiled with.

“Okorocha’s eight years tenure was a monumental waste to the people of Imo; we cannot afford to waste that as a nation. He is not fit to be the president of Igbo extraction. Let him open the flyovers that he built for the people to pass, let him rebuild the China roads that he built, and we can start talking from there,” Nkeoma had said.

However, Okorocha in the statement titled “RE: Okorocha Unfit To Be Nigeria’s President – Ohanaeze” made available to our correspondents on Tuesday, argued that the the “Government In Imo Led By Governor Hope Uzodinma Was Behind This Blackmail As Part Of The Script Handed Over To Him By His Sponsors Against Okorocha.”

The statement said Uzodinma “Had Come Up With This Blackmail To Puncture The Laudable Pronouncement In Favour Of Okorocha By The Movement For The Actualization Of Nigeria President Of Igbo Extraction (MANPIE), The Previous Monday.

“We have read a report Credited to one Chief Osmond Nkeoma, who claimed to be the National Organizing Secretary of Ohaneze, with the referenced Caption. He is from Imo State, and had claimed that “Okorocha’s eight years tenure was a monumental waste to the people of Imo State” and that was what informed the callous claim.

“At the end of his fruitless trip, he mentioned Chief Peter Obi and Okonjo Iweala as the best options for the office of President in 2023, on the side of Ohanaeze

The former governor said Uzodinma had neglected his responsibility to the people of Imo State and was now only obsessed with blackmailing him.

“Governor Hope Uzodinma’s government was behind the blackmail in line with the script handed over to him by those who enlisted him against Okorocha, with regard to the 2023 Presidency. Hence, Governor Uzodinma has not committedly begun to govern Imo State. He is only after Rochas Okorocha. He was behind the story of Okorocha being unfit to be Nigeria’s President,” the statement continued.

“Governor Uzodinma had done that to puncture the pronouncement by eminent Igbo sons and daughters from the five South-East States, operating under the aegis of the MOVEMENT FOR THE ACTUALIZATION OF THE NIGERIA PRESIDENT OF IGBO EXTRACTION (MANPIE), who stormed Okorocha’s Owerri residence on Monday, Nov. 16, 2020, to urge him to run for the 2023 Presidency and to inform him that they had adopted him as the Consensus Candidate for the position.

“The same Monday, while the meeting with MANPIE was in Progress, Governor Uzodinma deployed caterpillars and pay-loaders to demolish one of Okorocha’s signature projects, the Somto hospital, Commissioned by the Vice-President, Prof. Yemi Osinbajo. The governor did that to distract Okorocha from the beautiful meeting. And we are talking about a government that has Continued to stagger for almost eleven months now.

“Mr. Osmond Nkeoma is from Imo State. He was invited to Government House, where he was told what to say. And that is why they could not tell their audience whether it was a Press Conference or a Press Release, and where it took place. These are relevant information a story of that nature should have carried. The Statesman Newspaper, owned by Gov. Uzodinma’s government made the blackmail, a banner headline story, on Sunday, November 22, 2020.

“Using Ohaneze and talking about Peter Obi and Okonjo Iweala was to deceive the general public. We know their antics. Since the Ahmed Gulak’s episode, their style or approach has been the same. The only regret is that Ohaneze has been reduced by Characters like Osmond Okeoma to a mere blackmail tool in recent time.

“That was also the kind of Propaganda they had launched against Okorocha when he joined the Merger that gave birth to APC in 2013. They never succeeded and would not Succeed now.

“Let Gov. Uzodinma publish what he has done with Federal Allocations, Local Government Allocations, ISOPADEC Funds, IGR etc, in 11 months and let us publish what Okorocha was able to achieve within the same period when he held sway as governor. This is the best way to go. And not hide and seek game.

“As governor of Imo for eight years, Okorocha had avalanche of verifiable projects to his Credits. So much that, in the next 50 years, no governor of the State would build hospitals again because Okorocha had built more than 30 hospitals including one each, in the 27 Local Governments, the Somto hospital, which the governor demolished on Monday, November 16, 2020, the Mother and Child hospital, etc.

“Okorocha built many markets and no serious government would embark on building new markets again. He built the International Cargo Airport and no government would talk about Cargo airport in the State again. And so many other projects. Only Consolidation is needed for any government with sincerity of purpose and focus.

“Finally, the government in Imo should reduce the war fronts. The government is fighting everybody and every institution. And arresting, detaining and arraigning Imo Citizens at random. Imo is not known for all these. The governor should change style and be focused.”