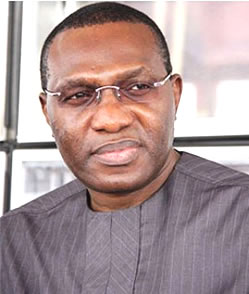 Staff members of Heritage Bank Plc on Monday accused Senator Andy Uba, representing Anambra South Senatorial District in the Senate, of collecting loans from the bank and refusing to pay them back.

The bank workers in their numbers stormed the official residence of the lawmaker in Abuja for a peaceful meeting to demand the return of loans said to be overdue.

They said they felt compelled to take the action because their jobs were at stake, adding that they would likely lose their jobs if the loans were not repaid.

In a now trending video, a voice narrating the essence of the visit to the senator’s home said staffers of the bank seen in front of the senator’s house risk losing their jobs if the lawmaker does not pay the loans he took years ago.

Over 20 young bank workers – men and women, in branded T-shirts and Jean trousers are seen in a video gathered in front of what they described as Uba’s house in protest, carrying placards.

According to the voice, they were staff members of Heritage Bank and were at Senator Uba’s residence in Abuja to put pressure on him to pay back his loans after several efforts had failed.

The voice said: “Good morning, ladies and gentlemen. Today is Monday, the 21st day of June 2021, and we have here the staff members of Heritage Bank Pl, Abuja. We are in front of Senator Andy Uba’s house in Abuja.

“Senator Uba has been owing the bank for a couple of years now, and we are here for a peaceful meeting with him, very peaceful meeting. To ask him to kindly repay those loans, because they are depositors’ funds.

“Those monies, if they are not repaid, will throw the number of the people you see here, with their families out of work. And we know the situation of the economy now. If this number of people are thrown out of work, you know what it means.”

Business Hallmark was, however, unable to verify the exact amount the senator took from the bank as at the time of filing this report.