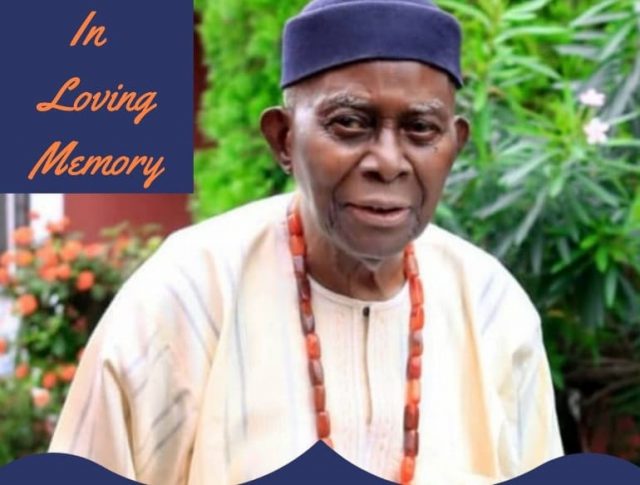 Activities lined up for the final funeral rites of a notable Mining Engineer and community leader, Ogbueshi George Nduka Onyemenam, have been announced.

Engr. Onyemenam died on January 26, 2022 in his country home, Asaba, Delta State, after an illness.

A statement by the heir apparent, Mr. Chike Onyemenam, SAN, indicates that there will be a vigil mass at St. Joseph’s Pro Cathedral, Nnebisi Road, Asaba, on Wednesday, February 23, 2022, by 5pm.

On Thursday, February 24, 2022, there will be a funeral mass, also at St. Joseph’s Pro Cathedral, Nnebisi Road, Asaba, by 10 am, to be followed immediately by interment at Uga Ezeafadia, Umuezeafadia, Asaba.

The ceremonies will be rounded off with the traditional Egwu Ota (Dance) on Friday, February 25, 2022 at Uga Ezeafadia Umuaji King Street, Asaba by 2pm.

Born on August 25, 1925, the late Onyemenam attended Holy Trinity Primary School Onitsha, where he was the Cathedral soloist and Christ The King College (CKC) Onitsha for his early formal education. He later proceeded to Camboume School of Mines, England, where he qualified as a Mining Engineer.

He then worked with the Federal Ministry of Mines and Power, moving round the country as a result of his involvement in the Federal Government oversight functions over mining projects.

Engr. Onyemenam retired from government work at an early age of 45 to become the General Manager of a British mining company in Makafo, on the Plateau.

He later retired finally at the age of 56 and returned to Asaba, where he took to surveying, before eventually becoming the Diokpa of Umuezeafadia village.

The late Onyemenam, until his death, was a devout Christian of the catholic faith and charismatic community leader whose life was a source of inspiration to those who came in contact with him.

He is survived by his wife, Anna, a retired teacher and five children, all of whom are operating at the zenith of their careers. They include: Mr. Chike Onyemenam, a Senior Advocate of Nigeria; Mrs. Irene Ubah, a retired Executive Director of Coca Cola International Plc; Mrs. Elaine Azinge, a Professor of Chemical Pathology; Mrs. Anne Okonkwo, a retired Director of the Federal Ministry of Educa­tion; and Dr (Mrs). Ifeanyi Nwachukwu, a Radiologist and Assistant Clinical Director.