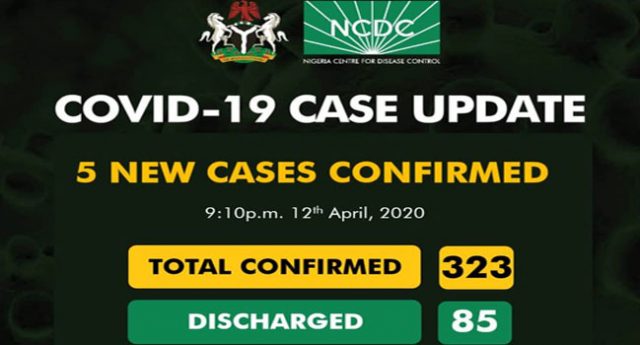 Five more positive cases of coronavirus have been recorded in Nigeria, raising the number of total infections in the country to 323.

The Nigeria Centre for Disease Control (NCDC) confirmed the new cases in a tweet on Sunday evening.

It explained that two cases were recorded in Lagos and Kwara States respectively while the last infection was discovered in Katsina.

As of 9:10 pm on April 12, the health agency noted that 19 states and the Federal Capital Territory (FCT) have recorded at least one confirmed case of coronavirus in the country.

It revealed that the death toll stood at 10 while 15 more people recovered from the disease, bringing the total number of those who have been discharged to 85.

With the latest update on COVID-19 in Nigeria, Lagos now has a total of 176 confirmed cases – more than triple the figure in the FCT.

The NCDC tweet came hours after Governor Babajide Sanwo-Olu announced that five more COVID-19 patients had been discharged in the state.

The governor explained in some tweets earlier that the patients – four females and one male – were discharged to reunite with their families and the society after testing negative for coronavirus.

He said with the newly discharged patients, a total of 55 people have been successfully managed for COVID-19 at the state government’s isolation centres and discharged to the community.