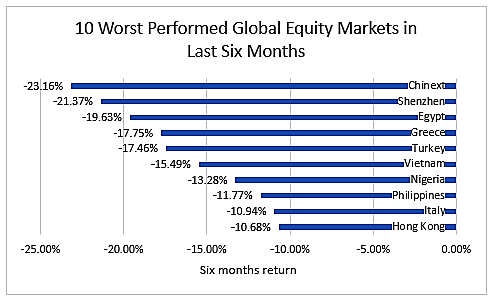 Fears of the adverse consequence of continued fiscal and monetary policy in the coming year if President Muhammed Buhari wins next year’s presidential election has unsettled the stock market. Due to foreign investors bailing out of the market the Nigerian All Shares Index (ASI) has tumbled -7.31 per cent year- to- date and 0.25 per cent year-on-year.

The local bourse has headed downwards for the better part of the year despite ending the previous year as one the best performing global markets. It posted a 42.3 per cent return at the end of 2017 but -13.01 per cent in the last six months. The market lost -1.17per cent to close last week’s trading at 32,766.37. 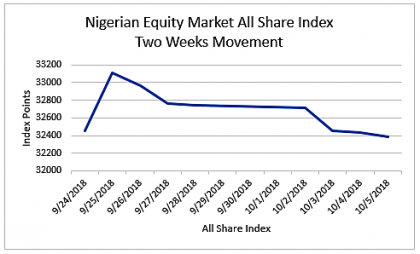 Although rising yields in developed markets have adversely affected emerging markets, such as Nigeria, uncertainty about the forthcoming 2019 elections has worsened the market’s performance.

“The severity of our problem, particularly the bleeding we have witnessed in the stock market is caused by home grown factors, especially the political risk,” he noted. He added that many portfolio investors have exited the country because of this uncertainty.

To be sure, portfolio investors have trooped to other more mature markets such as the US, which have been seeing higher yields in recent months, after the Federal Reserve Bank hiked interest rate twice during the year, the last month when it increased funds target range by a quarter point to 2 per cent-2.25 per cent.

Ayodele Akinwunmi, Head, research FSDH Merchant Bank told Business Hallmark that because of the coming elections, portfolio investors have adopted a “wait and see” attitude. “If the election is successful, and we believe it will be, more money would come in as foreign direct investment and foreign portfolio investment,” he explains.

Even the Monetary Policy Committee of the CBN at the end of its meeting last week expressed expressed concern over the decline in major capital market indices. It attributed the decline largely to sustained profit-taking by portfolio investors and capital reversals as foreign yields become increasingly more attractive.

In every election year about 12 months to the general election, the capital market is always feeling the negative impact of uncertainty attached to the political risk, argued Moses Ojo, Head, Business Development and Research, PanAfrican Capital Holdings Ltd.

“In conclusion, the tense political climate has affected the Nigerian equity market and the trends is expected to continue until after the election,” Ojo enunciated. 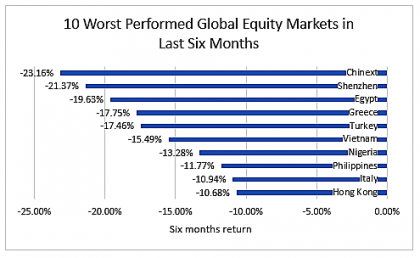 The flight to safety by portfolio investors has been mounting severe pressure on the country’s foreign exchange market, though, the Central Bank has been aggressively defending the local currency.

On Friday, the Naira depreciated 0.07 per cent against the dollar to N363.82 at the Investors’ and Exporter’ Forex Window. It was stable at $/N361 and $/N306.40 at the parallel market and Interbank forex window respectively.

The apex bank has been empowered to continue to defend the Naira by the rise in oil price, which rose to four-year high of over $82 last week as OPEC remains hesitant to ramp up production output.

“The Committee identified rising inflation and pressure on external reserves created by capital flow reversal as the current challenges to growth. It noted that inflationary pressures have started rebuilding and capital flow reversals have intensified as shown by the bearish trend in the equities market even though the exchange rate remains very stable.
“The Committee was concerned that the exit from recession may be under threat as the economy slowed to 1.95 and 1.50 per cent in Q1 and Q2 2018, respectively,” Godwin Emefiele, CBN Governor said while reading the MPC’s communiqué last month.