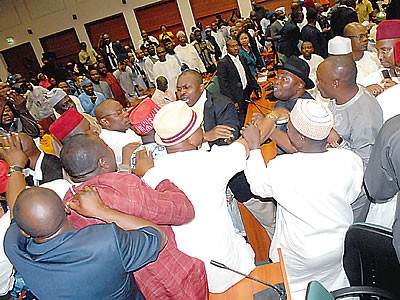 The free for all that took place on the floor of the House of Representatives last week Thursday June 25, 2015, has been accurately described as national disgrace and shameful. As a newspaper, we are sad and scandalized by the incident as well as concerned about its implication for the future of this new government. It is not that physical confrontation is new or alien to the NASS, but that it was a tragedy foretold and was allowed to happen; and particularly for a government that came with a new broom to sweep clean the old order.

It is regrettable that a party that rode to power three months ago on massive public goodwill could so easily squander such confidence; it points to deeper issues in the party than mere sharing of legislative positions. It is worrying that APC, which is the ruling party, has allowed such internal differences to mutate and metamorphose into a humongous national opprobrium that is symptomatic of our general inability to do basic things right.

Having won arguably the most fiercely contested and unpredictable election in recent times, APC has found the elementary challenge of forming a government most intractable and daunting. This newspaper feels, like most Nigerians, that as the party’s victory at the poll is seemingly one of the greatest feats in our political history, the NASS crisis may also pass for its worst failing, which may cripple this government if adequate painstaking care is not taken.

Without prejudice to the reasons behind this imbroglio, the blame lies squarely with the party for not only failing itself but also the nation. The party must take responsibility for its gross incompetence and bad politics in managing the situation since winning power and what it failed to do internally by putting national interest above personal interest has blown the nation in the face; this reflects more fundamental challenges for the party.

As an agglomeration of more than three legacy parties, common sense and political sensitivity should have been applied in decision making on the choice of NASS leaders through diligent compromise in the spirit of give and take to cement the gapping fault lines that usually characterize such mergers without an enduring ideological identity. This, the party, failed to do. Rather, its leadership embarked on the worst rapacious power grab that denied other legacy-partner parties the spoil of victory and consequently created disaffection and rebellion in its fold.

This newspaper is of the position that the fracas at the NASS is a clarion call to the APC to retrace its steps, put the nation ahead and come together to deliver on the mandate Nigerians gave to them in the last election. To allow this matter to simmer further is to disappoint millions of Nigerians who voted for them as well as arm the opposition party it dethroned to bounce back into reckoning. The huge task and choice before the party is to decide whether it will form a one-term government that may not survive the next election.

Hallmark is bothered that not dealing with the problem firmly and decisively will invariably hobble this government and probably marred its good intentions. Nigerians trusted in the integrity of the president and voted for him. It will amount to a disservice to the nation for a few people in the party to deny them this opportunity to prove their choice.

However, this newspaper objects stridently to the attempts by some people to drag the president into the raging fray – whether he should have taken a more active role in the unfolding tragic-comedy. Based on past experience and constitutionalism, we believe the president has adopted the most appropriate policy toward the crisis. We are reminded of the Obasanjo days when he decided NASS leaders and how it disabled our nascent democracy.

The constitution stipulates separation of powers of the different arms of government and it would amount to interference for the president to get involved. Although nothing is cast in iron, and the president may intervene to reconcile the warring factions. However, it should not be for him to impose any particular choice which is what advocates of presidential intervention wish. He should rather be neutral to all.

As it stands now neutrality is paramount if he does not want to spend the rest of his tenure fighting the NASS. He must resist attempt by the party to force him into taking a position so as to protect his presidency. We agree with his earlier policy to work with the leadership that emerges irrespective of who or how they emerged. That way he will have the freedom to seek their cooperation regardless.