When Kenyan writer who won  Caine Prize winner 2002,  Binyavanga Wainaina, began criticizing  the Caine prize for African writing , a lot of attention was drawn to the prize, it’s authenticity as an African prize. Last week the Caine Prize released 2015 shortlist which includes two Nigerian writers, Segun Afolabi who won in 2005 is shortlisted for The Folded Leaf and Elnathan John, shortlisted 2013 is been shortlisted this year for Flying. Other shortlisted authors include two South Africans   F.T Kola, for A Party for the Colonel; South African, Masande Ntshanga, for Space and Zambia writer Namwali Serpell  who made it to the African 39 shortlist with her story The Sack.

The stories are set in several places and it is left for the reader of African fiction to consider  which story amuses him or her the most. The judges this year in a press statement noted that this year’s prize is a celebration of well-crafted stories noting that these stories speak of the pleasure of reading fiction. The judges praise the unique value of the prize as it brings African writers to a world readership.

Really, how many readers in Africa are actually celebrating this readership more so where an African country like Burundi , the freedom of speech is being censored restricting the expression of citizens via media. Does the Caine prize for African writing really represent Africans more when more recently Wainaina see no reason why Africans should be interested in a prize for Africans set outside of Africa. In the words of Wainaina a Russian prize is not hosted outside Russia and the Pulitzer Prize is not taken outside America

Chairman of Association of Nigerian Authors, Professor Remi Raji, in a phone conversation see no reason why the prize shouldn’t be hosted in London ‘ if we feel it is not an African prize enough, we have the Pan African writers association in Ghana ,we can come together to have another African prize as grand as the Caine prize to be awarded in Africa, but how many African prizes do we have in Africa anyway, we don’t have enough’.

Kunnu Adeniyi , a literary journalist for Radio Nigeria believes if Africans don’t like the Caine prize in UK, they should have a counter prize in Africa, he who plays the piper dictates the tune .

Olakunle Kasumu presenter of channels Book Club  in a phone conversation said ‘It will be good if the prize is been awarded in Africa, that will be my first choice. I also don’t feel too passionately about it if it is hosted in Africa. The world is a global village now and if it hosted in London or Africa , people will still get to know about the prize. Moreover,  it is knee to know why the organisers are hosting it in London every year, they should provide answers to Africans because the prize is about African Writing.’

The Caine Prize seeks to reward the best short stories published in English in Africa and by Africans and it  is named after the late Chairman of Booker Plc, Michael Caine. 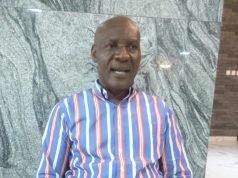