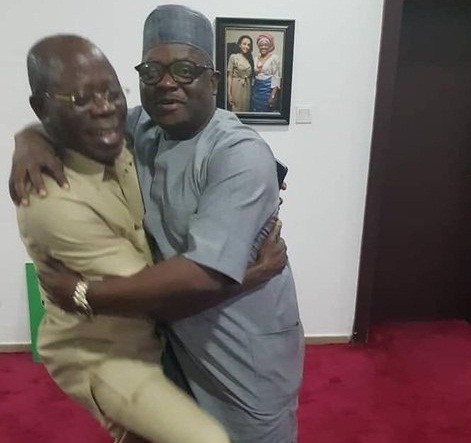 The embattled Chairman of the All Progressives Congress (APC), Adams Oshiomhole, on Monday survived the plot to remove him from office, as the National Executive Committee (NEC) meeting of the party scheduled for Tuesday where his removal had been hatched has been postponed indefinitely.

The postponement was announced at the end of a meeting of governors of the All Progressives Congress with President Muhammadu Buhari at the Presidential Villa, Abuja.

Business Hallmark reliably gathered that the decision was taken after a brief meeting.

According to the Chairman, Progressives Governors Forum, Mr Abubakar Atiku-Bagudu, who spoke with reporters after the meeting, the governors urged the President to support the postponement until the governors were able to resolve the issues in the party.

When asked whether Buhari approved the postponement, Atiku-Bagudu replied, “Yes. The President did. He is very happy!”

The governors absent were those of Kaduna, Ekiti, Yobe, and Kogi States.

Before the closed door meeting, Oshiomhole was sighted going to the office of the Chief of Staff to the President, Mr. Abba Kyari. It was unclear why he went to see Kyari, as he did not speak with reporters.

Earlier in the day, the Court of Appeal in Abuja had adjourned indefinitely, the hearing of the appeal filed by Oshiomhole to challenge his suspension from office as ordered by the High Court of the Federal Capital Territory in Jabi, Abuja, on March 4.

The appellate court had fixed Monday for the hearing of the appeal but adjourned till no particular date due to unavailability of a panel.

Oshiomhole’s case was listed as part of appeals scheduled for hearing at the Monday’s sitting of the court.

But a three-man panel led by Justice Stephen Adah only heard two of the listed cases and later announced to the packed courtroom that the rest of the cases including Oshiomhole’s would be heard by another panel.

It was, however, to the disappointment of many APC supporters, including Oshiomhole, when an official of the court later announced that a new date would be fixed for the hearing of the appeal.

He said the new date would be communicated to the parties in the case.

Oshiomhole, who had arrived in the courtroom at about 8am for the hearing scheduled to take place at 9am, later told journalists while departing that he would exercise patience for a new date to be fixed for the hearing.

Justice Danlami Senchi of the FCT High Court had on March 4 issued the interlocutory injunction for Oshiomhole’s suspension on the grounds that the party wrongfully continued to retain him as its National Chairman while he was under suspension as a member of the party in his ward branch of the party in Edo State.

The judge held that the party wrongfully continues to retain Oshiomhole as its National Chairman while he is under suspension as a member of the party.

He, therefore, ordered Oshiomhole to stop parading himself as the National Chairman of the party, and directed the party to cease acknowledging him in that regard.

He also ordered the Inspector-General of Police and the Department of State Services to mobilise its operatives to prevent him from accessing his office at the party’s secretariat.

Oshiomhole had filed four grounds of appeal at the Abuja Division of the Court of Appeal, praying for an order setting aside the interlocutory injunction issued by the FCT High Court.

He filed the appeal shortly after the order was issued on March 4.

In the notice of appeal filed in his name and that of APC, the appellants contended that the judge “arrived at a wrong conclusion” in his ruling and it “occasioned a miscarriage of justice”.

The appellants also argued through his lawyer, Mr. Damian Dodo (SAN), that the judge in his ruling prejudged the substantive case by erroneously delving into the issue of his performance of the duty of his office as the National Chairman of the party at the preliminary stage. 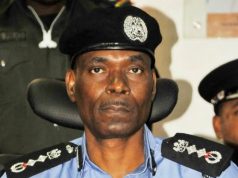